How to end the new War Between the States

Blue states embrace liberal economics, while red states try to win a race to the bottom. But both models are doomed 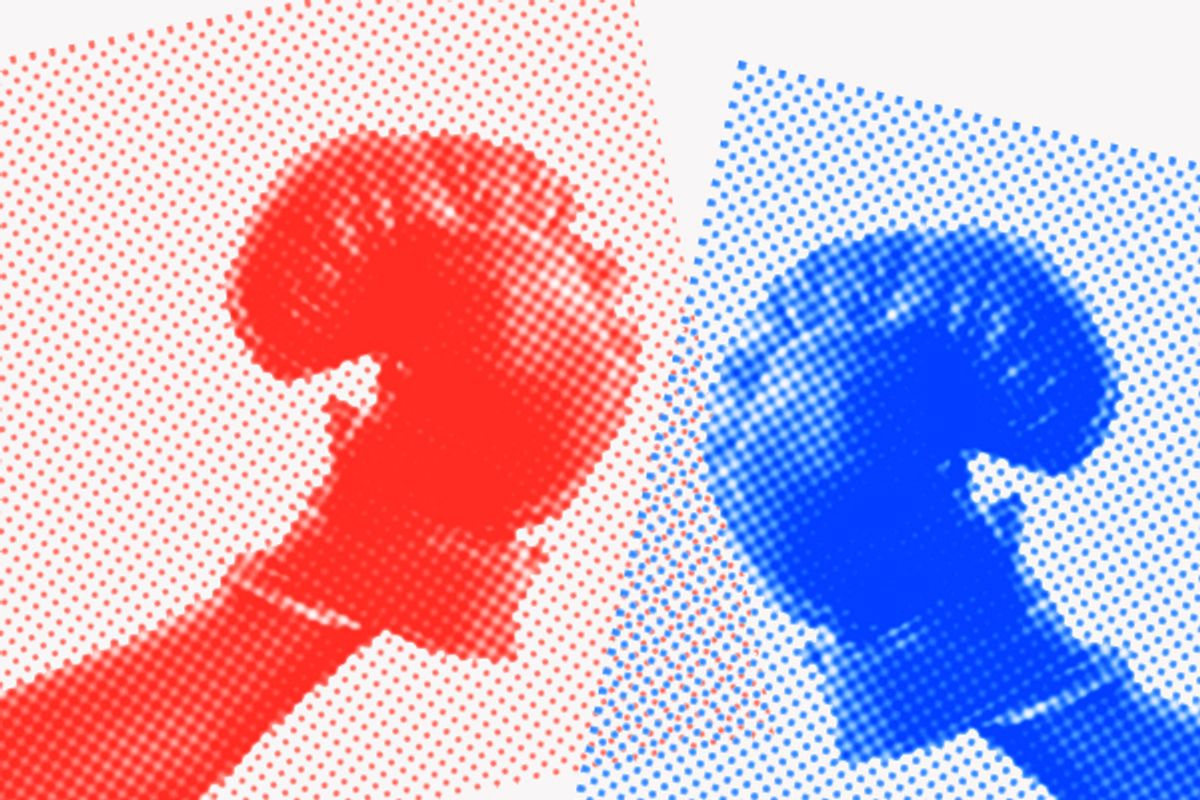 Increasingly the battle between left and right in the United States has become a second War Between the States. Red states claim they are picking up domestic migrants and industries from blue states because the latter are too liberal in their tax, welfare and regulation policies. Blue states argue that the red state economic strategy of stealing industries and workers from blue states is parasitic and unsustainable.

In the last generation, the trickle of domestic migration from Democratic-leaning blue states like New York and California to Republican-dominated red states, mostly in the South, has swollen into a flood. Between 2000 and 2010, six of the top 10 states receiving migrants from other states were in the South; the other four were in the non-California West. In the South, the only states that lost domestic migrants were Maryland (a Southern state only in heritage), Mississippi and Louisiana, following Hurricane Katrina. During the Dust Bowl, Californians tried to stop "Okies" from moving there. Today Oklahoma is experiencing an influx of former Californians.

One reason that politicians in blue states like New York and California are so enthusiastic about immigration is that they depend on foreign migrants to replace the New Yorkers and Californians who are rushing to the exit doors. But even today’s high levels of mass immigration are not enough to sustain blue-state population growth. Since 1960, New York has lost 7.3 million residents to other states. The 4.8 million immigrants to New York from other countries have not been enough to offset the loss, resulting in a net decline of 2.5 million New Yorkers.

Likewise, the huge influx of mostly poor Latin American immigrants into California has not been enough to maintain California’s relative population growth rate. As a result of the 2010 census, California will gain no new congressional seats, while Texas, as a result of both domestic and foreign migration, will gain four.

For their part, Texas and other conservative states that have grown at the expense of liberal states do not even pretend that the source of their attractiveness is their world-class infrastructure, their highly educated and disciplined populations or their superior K-12 educational systems (although Texas has a first-class state university system). Low taxes, low spending and cheap, non-union labor remain the basis of Southern economic development programs, as they have been since the state of Mississippi pioneered "smokestack chasing" in the early 1900s. In the 2000s, Texas produced more high-tech jobs than California.

But the tech sector in Texas has depended largely on the relocation of labor, management and capital from the West Coast and elsewhere to the Texas Triangle, not on the cultivation of home-grown talent and infrastructure by the state of Texas along the lines of California in the early 1960s under Gov. Pat Brown or New York in the 1920s under Gov. Franklin Delano Roosevelt.

To be sure, the domestic migration from blue states to red states results from a number of factors, in addition to low taxes and small government. One is weather. Americans have been moving to the warmer climates of the Sun Belt ever since the invention of the air conditioner.

Another factor is the price of land. Texas and other Southern states, with the exception of Florida, did not experience anything like the real estate bubbles in New York and California. East Texas in particular has an area of flat, hot, humid land the size of a major European country, which, precisely because the fashionable rich do not want to live there, will remain a Canaan for upwardly mobile working-class migrants, domestic and foreign, in search of big homes in low-density neighborhoods.

But progressives are deceiving themselves if they refuse to admit that high taxes and high welfare state burdens are a factor in driving domestic migrants out of the more liberal states. And progressives are also deceiving themselves if they think that mostly unskilled foreign immigration can maintain public welfare and public service systems that were built when the average state worker was a well-paid, unionized industrial worker, not an impoverished janitor or health aide. Apart from a small number of skilled immigrants, the immigrants in California and New York are predominantly low-skilled, low-wage workers who are poorer than the working-class and middle-class natives who are leaving for sunnier and cheaper climes. In the last generation, the revenue systems in California and New York depended not on a healthy middle class, but on billionaires in tech and finance. But absent a flood of tax revenues from another asset bubble, that method of financing generous state programs is no longer available, and the next-generation majorities in those states are unlikely to make much money.

Neither the blue state nor the red state model can succeed, in the long run. The attempt by blue states to create miniature welfare states and local progressive taxation systems more generous than those of the nation as a whole cannot succeed, in a federal system with free movement of labor and capital. Excessive generosity by the state legislature will tend to drive business and residents to other states with less generous welfare programs, less regulation and lower taxes.

But while miserly, union-busting states can benefit in the short run from a "race to the bottom" within the federal system, in the long run they and the nation as a whole will be losers. The race-to-the-bottom strategy does not create new productive capability in America; it merely rearranges it. If a Silicon Valley entrepreneur, a product of California’s superior education system a couple of generations ago, sells a small, expensive house in Palo Alto and uses the money to build a giant mansion in the hills of Austin, no new talent has been produced, compared to a scenario (alas, purely hypothetical, at this point) in which the world-class K-12 schools of Texas turned working-class native and immigrant Texans of all races into world-class scientists, engineers and entrepreneurs.

For the nation as a whole, an excessive reliance on skilled immigration is a similar unsustainable Ponzi scheme. A policy of leeching off the primary and secondary school systems of China and India rather than educating Americans can work only for a while.

Is there an alternative to these two Ponzi schemes -- the red state economic Ponzi scheme of luring talented people whom the red states themselves are incapable of producing, and the blue state demographic Ponzi scheme of encouraging mass immigration to replace the flight of native and naturalized citizens from excessive taxes and overburdened state and local welfare systems?

Here’s an idea -- the federal government should be a blue state, in order to free all of the states to be red states.

The blue state model hasn't truly failed, at the federal level, because it hasn’t been truly tried. Conservatives to the contrary, America’s national welfare state is not an example of social democratic big government. The only significant purely federal social insurance programs are Social Security and Medicare. The other major programs are mostly poorly functioning federal-state hybrids, like unemployment insurance and Medicaid, or welfare programs run through the tax code, like the Child Tax Credit, the Earned Income Tax Credit, subsidized private savings (401Ks and IRAs) and employer-provided health insurance. Because the federal government can borrow money in economic downturns more easily than the states, federal-state hybrid programs like unemployment insurance and Medicaid tend to be dragged into crisis in recessions by state revenue shortfalls, at the very moment they are most needed. And what Christopher Howard calls the "hidden welfare state" of tax expenditures like employer-based health insurance and the home mortgage interest deduction is grossly wasteful and inefficient, as well as unfair -- the more money you make, the more money you tend to receive.

If conservatives really cared about economic efficiency, they would support Ronald Reagan’s proposal to completely federalize Medicaid -- and, by the same logic, to completely federalize unemployment insurance. And they would argue for phasing out inefficient and indirect subsidies, particularly those that enrich parasitic middle-men, like the money managers who skim fees from tax-favored retirement savings accounts, in favor of simple, foolproof, purely federal, tax-based social insurance programs along the lines of the successful Social Security program, whose long-term funding problems are minor. (Medicare’s problem is the combination of taxpayer subsidies with the absence of the medical price controls -- "all-payer regulation" -- that other countries use to keep medical costs down).

Campaigns by the center-left to create or maintain state-level or city-level systems of welfare and progressive taxation that are more generous than the national average are well-intentioned but almost certainly doomed by the race-to-the-bottom dynamics of American federalism. The energy of the center-left would be better channeled into campaigning for two major national reforms: transferring all social insurance and welfare functions to the federal government and reviving a version of the popular and successful federal revenue sharing program of the 1970s that was abolished during the Reagan years.

These two reforms would contribute greatly to leveling the playing field in the competition for residents and businesses among the blue states and the red states. Liberated from the burdens of welfare programs by Washington, D.C., blue states like California and New York could focus on local infrastructure and public education.

At the same time, the sharing of federal revenues, including revenues from a new federal value-added tax, would reduce the risk that states with adequate investments in public education and public infrastructure may drive out residents by relatively high income and property taxes. If -- and this is a big if -- direct federal funding took up the slack, states like California and New York could consider abolishing or slashing their income taxes, without sacrificing the welfare of their neediest residents.

And because even a regressive federal consumption tax has a much broader base than state taxes, roping in rich Americans who tend to be concentrated in a few ZIP codes, replacing part of state and local sales taxes with federal VAT revenues would reduce the regressivity of combined state, local and federal taxation overall.

Freeing state governments to be smaller, by making the federal government somewhat larger, won’t appeal to those conservatives who want the federal government to be like Texas or Mississippi or to those progressives who want every state in the Union to be a miniature Sweden. But this radical proposal for a new federalism to end the war between the states has one thing going for it: It’s not a Ponzi scheme.