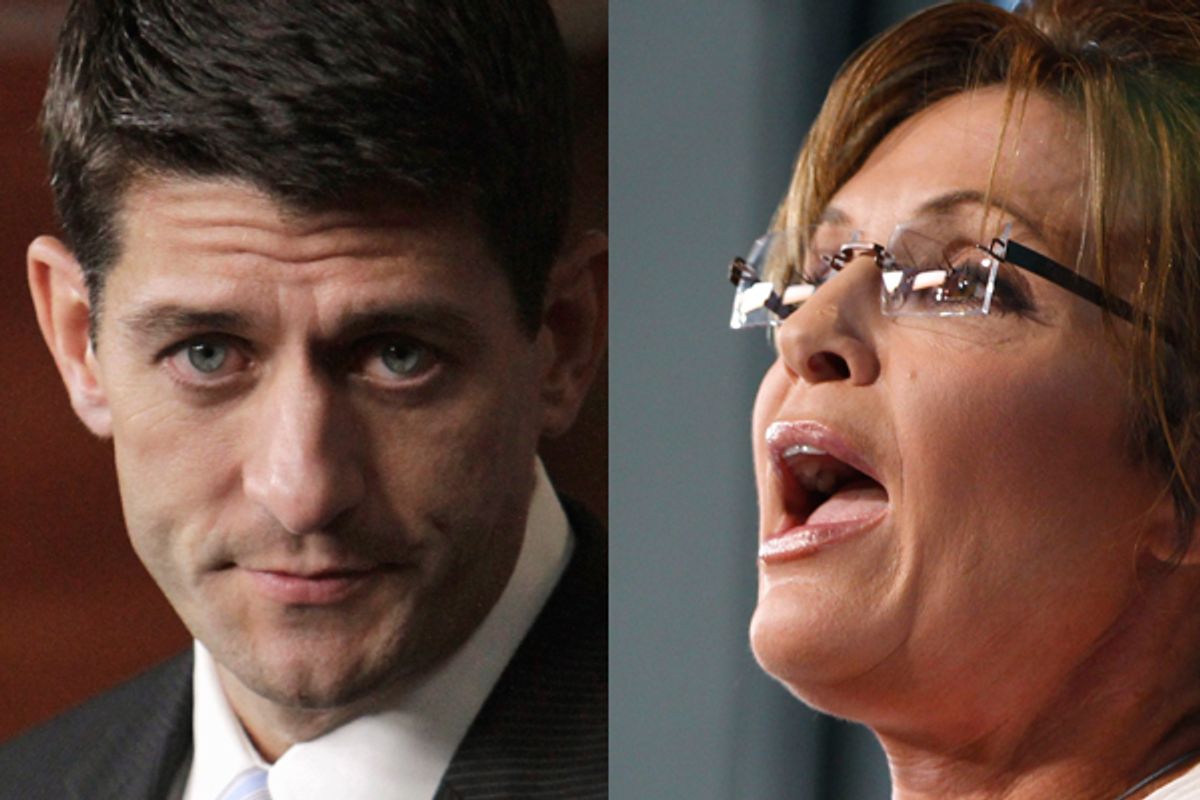 Paul Ryan is the wonky chairman of the House Budget Committee and a seven-term member of Congress known for his comprehensive plan to cut Medicare. Sarah Palin is the former half-term governor of Alaska known for her halting manner of speech, weak grasp of public policy, and reality show.

But Ryan and Palin share an unlikely distinction: they have both enjoyed the intense promotional efforts of Bill Kristol, and his magazine, the Weekly Standard.

Wisconsin congressman Paul Ryan is strongly considering a run for president. Ryan, who has been quietly meeting with political strategists to discuss a bid over the past three months, is on vacation in Colorado discussing a prospective run with his family. Ryan’s concerns about the effects of a presidential campaign – and perhaps a presidency – on his family have been his primary focus as he thinks through his political future.

“He’s coming around,” says a Republican source close to Ryan, who has been urging the 41-year-old to run.

The piece contains uber-flattering blind quotes like, "With Paul, it’s more about obligation than opportunity."

Almost certainly, the reason this story appeared in the Weekly Standard is that Kristol, the magazine's editor, has been promoting a Ryan candidacy all year. Here he is floating the idea to a delighted Neil Cavuto on Fox back in January:

Here's another blog post from January, in which Kristol declared: "Wouldn't it be easier just to agree now on a Ryan-Rubio ticket, and save everyone an awful lot of time, effort, and money over the next year and a half?"

Round Two came in April, when Kristol described how someone sent him Ryan-Rubio 2012 campaign buttons and "All I can say is the buttons went like hotcakes to staff and guests the minute the show ended."

We've seen this pattern before. Back in 2007-2010, Kristol promoted Sarah Palin first as a national figure and later as a presidential candidate. He famously discovered her on an Alaskan cruise in 2007 and played a key role in raising her profile among GOP elites, which led to her landing the VP slot on the McCain ticket. Kristol emerged squarely in Palin's camp during the bitter split within the McCain organization in the final days of the 2008 campaign. He then spent the next two years promoting her as a serious 2012 contender before finally becoming disillusioned and publicly expressing disappointment in her this past February.

So what does this tell us about Ryan and the 2012 race? For one, he has an extremely influential GOP media figure in his corner, a force which should not be underestimated.

On the ideological front, we already know that Kristol is a big fan of Ryan's plan to end Medicare and slash other spending. On foreign policy -- an area in which Ryan has been less vocal, but one which is central to Kristol's worldview -- we have to assume that Kristol trusts Ryan is a genuine neoconservative. A taste of that already emerged in Ryan's speech on "American exceptionalism" in June; if he does get in the race, I'd expect him to be about where Rick Perry is on foreign affairs.