He's been an official candidate for 72 hours, and his addiction to red meat is already giving his party anxiety 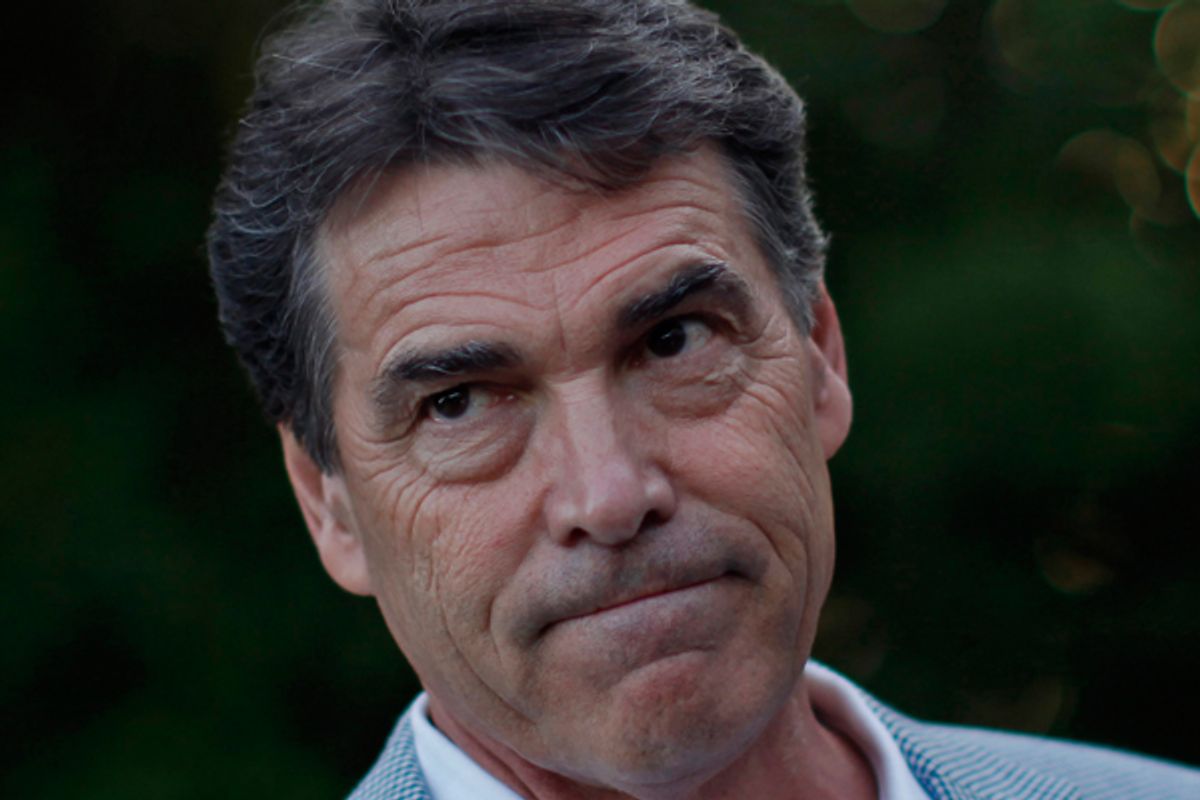 Not long ago, the main question about Rick Perry was whether he really had the drive and fire to run for president. After all, he waited until the middle of this year to express interest in the race, and only formally jumped in this past weekend. In most previous cycles, this would have been far too late.

The good news for Perry in his first 72 hours as a candidate is that he has definitively put these doubts to rest. So far, he's been unusually animated and colorful, delivering red meat-laden remarks in Iowa on Sunday night, tweaking rival Mitt Romney, and joking (maybe?) about carrying a concealed weapon. The two most recent late presidential entrants, Fred Thompson in 2008 and Wesley Clark in 2004, were derided for their (supposed) lethargy and lack of focus when they finally entered the ring, but Perry can't be accused of anything like that.

But Perry's rollout does raise another question: Does he have too much fire?

He's in the news this morning for off-the-cuff comments he made at a backyard event in Iowa Monday night about Federal Reserve Chairman Ben Bernanke:

"If this guy prints more money between now and the election, I don’t know what y'all would do to him in Iowa, but we would treat him pretty ugly down in Texas. Printing more money to play politics at this particular time in American history is almost treacherous, or treasonous in my opinion."

This came after Perry had already stirred controversy by suggesting in his Sunday night speech that American military personnel do not respect Barack Obama, their commander in chief, and by declaring at the Iowa State Fair on Monday that "I think you want a president who is passionate about America -- that’s in love with America." (Asked later by ABC News if he was saying that Obama doesn't love America, Perry replied, "You have to ask him.")

Perry's antics can be viewed two ways. In terms of appealing to the restive anti-Obama, anti-Washington establishment Republican Party base, he's probably hitting the right notes.  What Perry is saying probably resonates with these voters as much as anything they've heard from Michele Bachmann or Herman Cain. Just as important is the way Perry is saying all of this. His "real American" Texas swagger is part of his appeal to the GOP base, and Commentary's John Podhoretz is right when he explains Perry's Bernanke comment this way:

But the promise of Perry's campaign wasn't that he'd just be another Bachmann or Cain, serving up tasty red meat for a rabid base that can't get enough of it. It was that he'd appeal to that base in a more skillful way, one that wouldn't make it nearly so easy for him to be caricatured as an ill-tempered extremist. This would make him the consensus candidate the GOP has been looking for, someone the base is happy to support but who doesn't terrify the party's November-minded elites.

But when it comes to reassuring those elites, Perry's rollout doesn't seem to be going well at all. There was the scathing editorial in Monday's Wall Street Journal that questioned his general election viability and called for a new candidate to enter the race, along with a similarly themed column from Ross Douthat, the New York Times' most conservative voice. Then on Monday night, Karl Rove went on Sean Hannity's Fox News show to argue that there's still time and room for new candidates to run, specifically mentioning Chris Christie and Paul Ryan, and when the Bernanke comment broke, Commentary's Podhoretz branded it "a serious rookie mistake" that will make it harder for Perry to win over the Republicans who have been looking for a new candidate.  And now the Weekly Standard is reporting that Ryan is "strongly considering" jumping in and is currently discussing the race with his family. (Ryan's office has issued a loophole-filled denial; if he does get in, I'll have some crow to eat.)

These are not the signs of a successful rollout for Perry. For months, the opinion-shaping elites of the GOP had hoped that he might represent a magical hybrid of Bachmann's passion and Romney's electability. But if Perry keeps this up (and he may not be able to help himself) they're liable to conclude that he's just another Bachmann.