Is what Rick Perry said about Bernanke any worse than usual for Rick Perry? 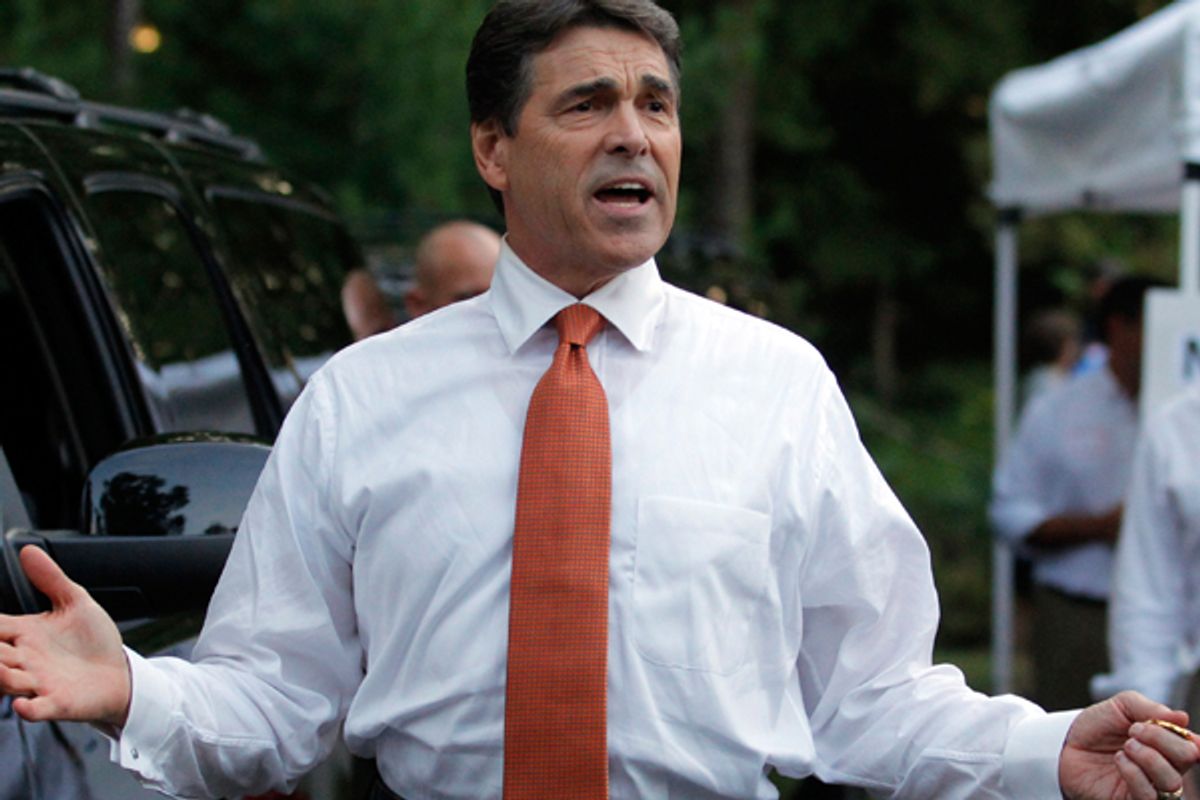 Yesterday, Texas governor and sudden Republican presidential front-runner Rick Perry said that if Ben Bernanke tried any of that money-printing stuff in Texas, he'd be strung up. "If this guy prints more money between now and the election," Perry told some Iowans, "I don’t know what y'all would do to him in Iowa, but we would treat him pretty ugly down in Texas." (Iowa's last execution was in 1963, so Iowa would probably not kill him.)

Among many Americans, especially wealthy rich white political pundits who live in gated communities in Maryland, it is considered "folksy" and charming to explicitly remind people of and seemingly endorse America's ugly history of lynch mobs doling out "frontier justice," but even among those who see nothing wrong with whitewashed nostalgia for gruesome, lawless vigilantism, Perry's comments were thought to have gone a bit too far. (Accusing the Republican-appointed chairman of the Federal Reserve of "treason" was a "serious unforced error," according to John Podhoretz.) New York Times Washington correspondent Binyamin Appelbaum summed up one strand of establishment response to the comments by calling Perry's remarks "horrifying."

Rick Perry is not sorry about the comments. And why should he be? He could've said this two weeks ago and no one would have cared! Because I'm reasonably sure he's spent his entire political career saying stuff like this, and that is why everyone thought he'd be a good presidential candidate.

Rick Perry saying something that combines poorly understood far-right political beliefs and an economically illiterate attack on D.C. elites with a folksy threat of violence is a feature, not a bug. "Joking" about Texas' imaginary right to secede before broaching the subject more seriously at a Tea Party rally? Did that in '09! I realize no one read his dumb book -- "Everything Is Unconstitutional: The Story of My Recent Conversion to Fringe Beliefs That I Clearly Don't Entirely Understand" -- but didn't anyone read a summary?

Now that Rick Perry is an "official" candidate, as of a few days ago, is he seriously supposed to stop being an irresponsible far-right numbskull? And turn himself immediately into a responsible elder statesman?

Also keep in mind that Rick Perry executed an innocent man and if that didn't disqualify him from being taken seriously as a presidential candidate I'm not sure how jokingly threatening to do so to another guy would.