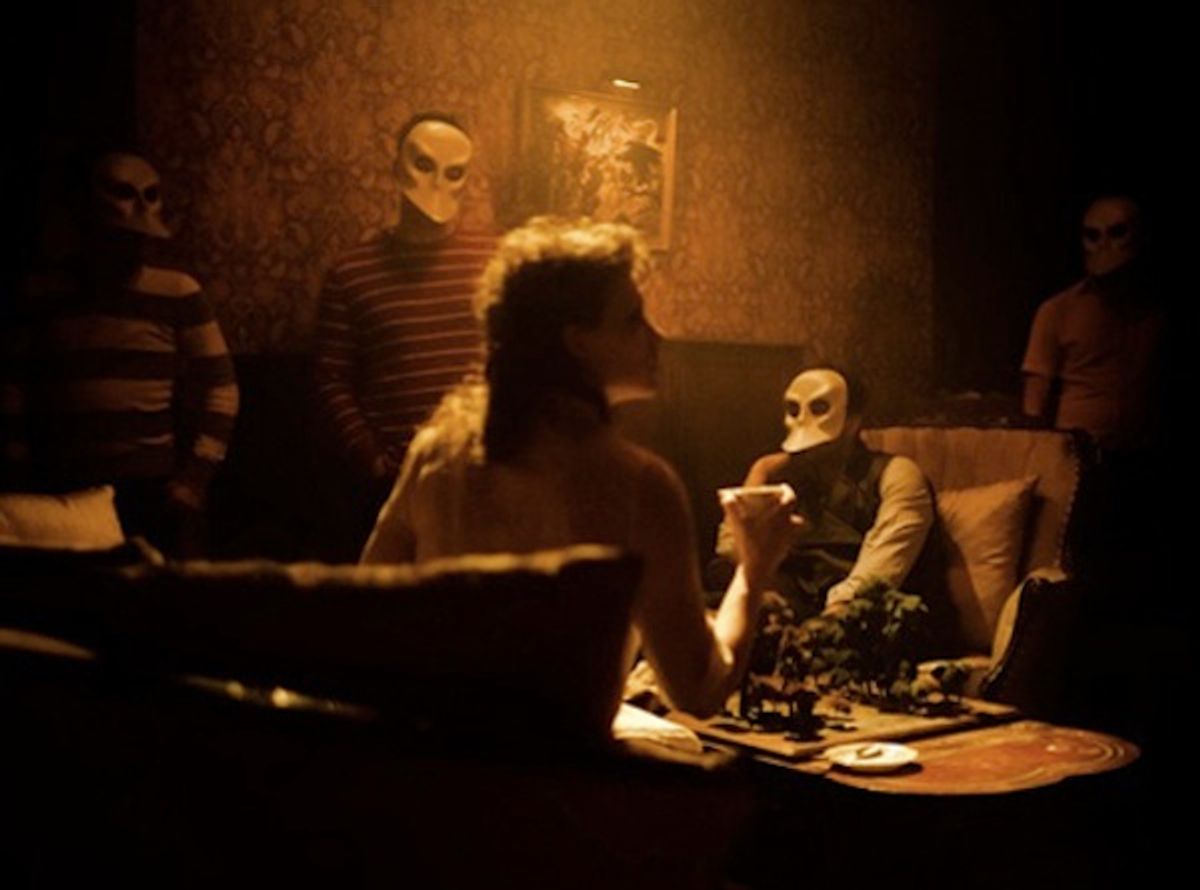 "I've gotten to the secret level in Macbeth!"
--

"Sleep No More" is one of the hottest shows in New York right now, which is surprising, considering that I spent most of my two hours during the McKittrick Hotel production wandering around the six-story building, wondering what the hell was going on.

The British company Punchdrunk's production is ostensibly the story of "Macbeth," though mixed with Alfred Hitchcock's film "Rebecca" and told in the form of an interactive maze that owes more to video games -- New York magazine compared the experience with "puzzle-horror first-person video games like BioShock" -- than Shakespeare.

Audiences form groups and are given "Eyes Wide Shut"-style masks as they enter the lounge area, which serves as the show's waiting room. They are told they aren't allowed to speak until they return to the lounge and also not to bother the actors -- but nothing else is off-limits. Then you are let loose in the hotel, where every room is decorated like a spread from "Nightmare Homes Monthly," and run into the "characters" (easy to spot because they aren't wearing masks). They perform their wordless scenes as they race from room to room. Sometimes they dance. Sometimes they fight (also a form of dancing, with some super-intense choreography). In one room, you might find a weeping woman looking at a photograph while packing a suitcase. In the basement, there's a dinner party where guests are either having a blood orgy or doing a sweeping waltz, depending when you arrive.

There's even a strobe-light rave room where a naked man wearing a boar's head simulates sex with a woman. In another, a lithe man lip-syncs to Peggy Lee's "Is that All There Is?" while crying. David Lynch would be proud.

"Sleep No More" was beautiful, terrifying and novel. What it wasn't, however, was coherent. But maybe that's because I hadn't known that in order to get the full experience of the play I would have had to spend hours unlocking hidden Internet websites and swapping clues on Facebook with other devotees. Basically, it requires turning your life into one big alternate reality game before the show even begins.

As Ben Brantley wrote in his New York Times review:

"The idea is once you're let loose on one of the floors of the hotel, you pick out a single character and pursue him or her (though you can switch any time you want), as the performer runs, dances and vaults all over the place."

That's easier said than done. These actors will run you ragged through corridors and secret passageways, sometimes locking the door behind them. Audience members themselves act as another deterrent to sticking with Macbeth or one of the witches; mobs form around the actors and block you from seeing all the action. Half the time, the group divides as it tries to (silently) figure out if Macduff ran up the stairs or slipped into a backroom somewhere. Next thing you know, here's a new character with a plot all his own. You end up watching a bartender fight some other guy for awhile before realizing that you've completely missed the point ... if there ever was one.

Unlike fragmented films such as "Memento" or "Inception," there's no DVD version of "Sleep No More." If you leave feeling like you didn't get it, well, you didn't get it. If only you had bothered to check out the discussion boards on the play's Facebook page, where hyper-vigilant audience members post clues on whom to follow, where the action is going to take place, and what the hell is actually going on. It's like a go-to guide for the uninitiated, and after the show it's the best place to go and post your questions about the production. Say, for instance, that you wanted to figure out how to follow the character of Macbeth without losing him in the crowd. Well, here are some tips (which contain major show spoilers), courtesy of another "Sleep No More" forum:

"I followed Macbeth around pretty much all night. After the dance, Lady Macbeth takes Duncan away to another room. I followed them.

She seduces him, then after some kissing, she goes away.

Duncan undresses and then goes to the area right next to his bedroom that has pillows on the floor, and a basin with blood, and he lies down on the pillows.

Macbeth walks in and smothers Duncan with a pillow. Then he goes to the basin and covers himself in blood.

He runs to the bedroom with the bathtub, Lady Macbeth undresses him and bathes him, etc.

After that, he goes to a room with a pool table and kills Banquo.

He goes and meets Lady Macbeth again (but not in the bedroom) and they go to the banquet scene.

Then Macbeth leaves (unless you're catching the very last go-around), and goes to the Hotel Lobby.

He beats up and tries to rape Lady Macduff, and then Macduff beats the crap out of Macbeth.

Then Macbeth runs to a balcony (we're not allowed to follow him, we have to watch from the sides), and he jumps down to the forest."

Don't live in New York or have $80 to spend on a ticket? Well, there's a reason to care about these secret clues and weird haunted-house rooms. Remember that 1997 David Fincher film, "The Game," the one where Sean Penn buys his uptight corporate brother (Michael Douglas) the ultimate birthday present -- a voucher for a live "game" from a company called Consumer Recreation Services. From there on in, every person Douglas' character comes in contact with is part of the game, from business associates to that pretty waitress who just messed up his food order. Before you can say "Big Brother," Douglas is running for his life, convinced he is about to be killed by this shadowy CRS conglomerate, which is everywhere and owns everybody.

Now jump ahead a couple of years and meet a man named Elan Lee, one of the founding fathers of alternate reality games (ARGs), who cites "The Game" as one of his major influences.

ARGs usually start out on the Internet (check out ARGN.com, which links to the big games being played right now). A cryptic website leads participants to a couple of clues, which quickly move into real-life scenarios. Players are expected to meet a certain person at a certain place in order to get another piece of the puzzle. The difference between "The Game" and ARGs is that you are working with a team: everyone else who is playing the game at that time. It's a group activity, where one person's find is quickly put up on a forum, to be compared with what someone else discovered in a different location. It's like Fincher's movie plus Dungeons and Dragons, with enough viral buzz to attract a cultlike following.

Even if you've never heard of ARGs, you've probably followed one anyway. "The Dark Knight" used one to give away the first peek of Heath Ledger as the Joker. To a lesser extent, it's how J.K. Rowling revealed Pottermore as her new website, because the clues were only handed out online.

ARGs have been mainstreamed by marketing strategists for everything from the movie "A.I." (where the game was called "Beast" and revolved around a fictitious murder) to Lee's first corporate creation, "I Love Bees," which was actually a viral promotion for "Halo 2." Here's a walk-through of how the latter worked:

The great part about using alternate reality games instead of regular advertisements is that a small group of super-fans can be counted on to play the game as quickly as possible, then post the results online. Then it's picked up by the rest of the Internet and mainstream media, which don't have the time or inclination to do hours of real-life legwork just to see a sneak peek of an upcoming movie. But for ARG fanatics, the results aren't the point; it's the game that matters. Well, the game, and the community built around it.

Which brings us back to "Sleep No More." Yes, this play is an ARG, although it doesn't have to be; it can start and end with your experience during a performance. But the show does have bonus material that will lead you to real-life encounters with the characters outside of McKittrick Hotel, provided you can figure out how to unlock Punchdrunk's coded website. There have been location-based clues at Grand Central and IRL meet-ups for those who are as obsessed with solving the seemingly endless mysteries of "Sleep No More."

Suddenly, those insanely detailed rooms filled with ephemera in "Sleep No More" don't seem to simply mean some whimsical set designer had an unlimited budget. As it turns out, everything is a possible clue, relating to a story much larger than the ones told inside the confines of the "Macbeth" story line.

So "Sleep No More" is an interactive play that's also a community-sourced Internet game that requires a working knowledge of Greek gods and JavaScript in order to solve it. God help all the Luddites of the world if this is the future of theater.