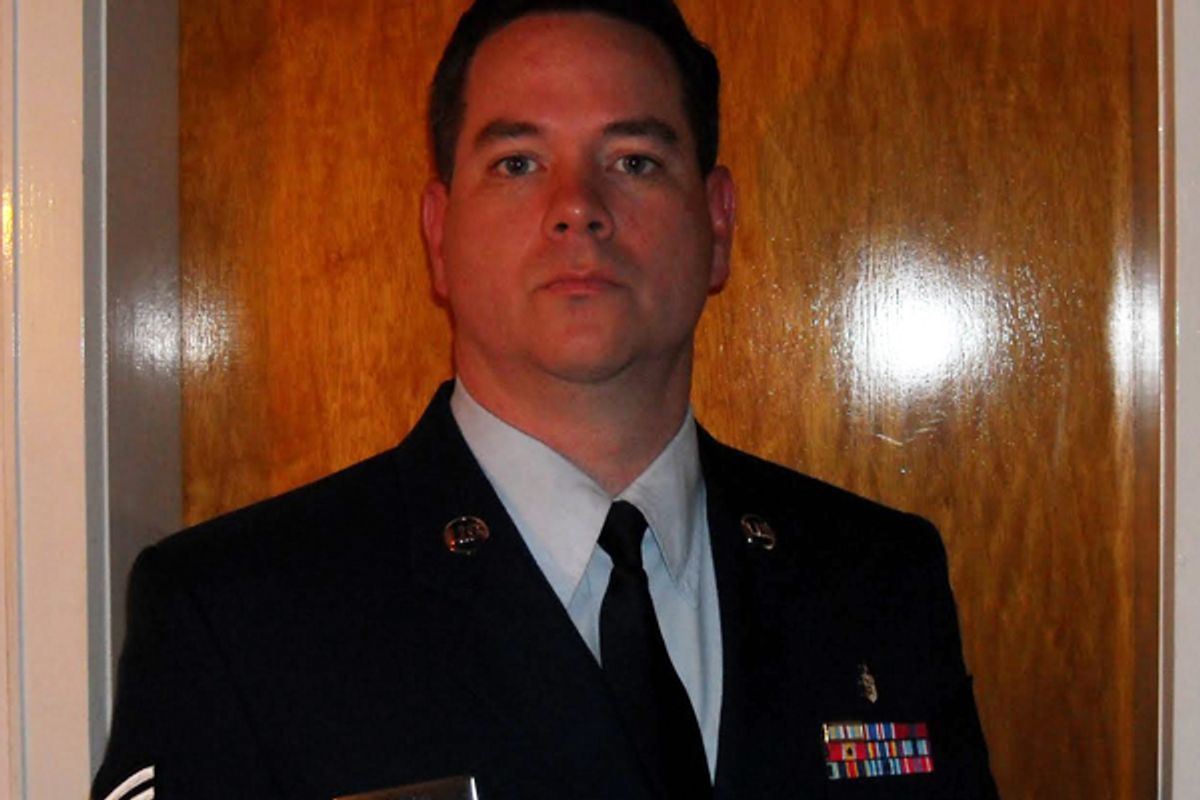 Adam Weinstein flags the case of the latest member of the military, Staff Sgt. Daryn J. Moran, who has apparently gone AWOL over his belief that Barack Obama was not born in the United States and is therefore not legitimate commander-in-chief.

Moran stopped reporting for work at Ramstein Air Force base in Germany last week because of his belief that Obama is "an enemy and a liar." His recent background in the military includes protesting the repeal of "Don't Ask, Don't Tell" and getting in trouble for assailing Islam in a way that made coworkers uncomfortable.

"I feel like I'm supporting the flag of whatever those Islamic countries are and the rainbow flag, and not the red, white, and blue, you know?" he said on a Birther radio show over the weekend. He also expressed his belief that Obama's long-form birth certificate, released in April, is fake.

The episode points to the remarkable resiliency of Birtherism. And the fact that Moran's case has quickly become a cause celebre online shows that anti-Obama conspiracy theories continue to have a broad appeal.

In a letter explaining his actions, Moran, who says he believes he will be arrested, cites as a role model a former Army doctor who pulled a similar stunt last year.

Regular readers will remember the tragic case of Terry Lakin, who served six months in prison for his Birther-inspired refusal to follow orders. Lakin accomplished nothing beyond losing his job and causing financial ruin for his family.

In Moran's case, the Omaha World-Herald found that the airman is getting support from his like-minded father:

"I think he thinks he's right, and so I'm behind him," Howard Moran said. "I am concerned they are going to put him in jail, though."

Finally, here is Moran explaining his stance on a Birther radio show:

UPDATE: Scott Fontaine of the Air Force Times reports that the military is now disputing Moran's claim that he has gone AWOL:

“He is currently outprocessing for discharge from the Air Force which was previously approved by his commander on August 4th,” the statement reads. “While we are aware of the comments that appear on various Web sites attributed to Staff Sgt. Moran, officials with United States Air Forces in Europe will not discuss nor characterize those comments."

This seems to leave a few possibilities for what's going on here: Moran is merely pulling a publicity stunt; or he's just confused about his status in the Air Force; or the Air Force itself is trying to avoid a big incident and is letting him go quietly. Or perhaps some combination of the above ...