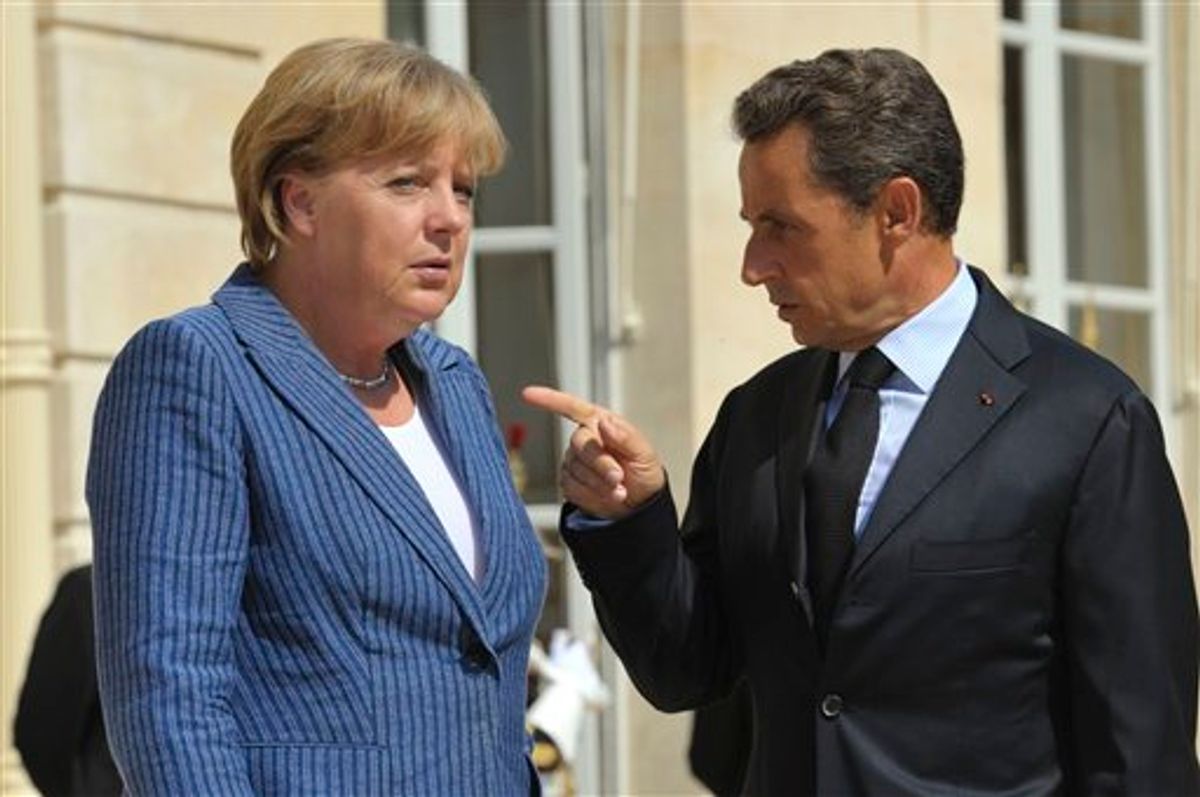 BOSTON -- It's time to invoke that old (if apparently false) trope about the frog that won't jump from scalding water as long as it's gradually heated.

Although details remain murky, the measures appear to take a baby step toward one of the euro zone's two potential destinies: full-scale fiscal marriage (the other being a messy breakup).

In brief, "Merkozy," as the two leaders have become known, proposed the following (which obviously will need to be considered by lawmakers before they can be implemented):

They also announced that the rescue package currently in place is adequate, and that euro bonds -- which would ease pressure on member states by borrowing under the creditworthiness of the European Central Bank -- may be issued eventually, but not any time soon. (For more on the details of the announcement, see Tom Mucha's blog hit.)

In other words, Merkozy is advocating a gradual shift toward the type of unified fiscal policy -- basically, a United States of Europe -- that many economists have argued is essential, if not inevitable.

Sound like good news? The markets didn't think so. The S&P was down by 1.9 percent Tuesday afternoon, before recovering somewhat. The euro slid as well.

"It's hugely disappointing and what they say is not going to work," Marchel Alexandrovich, an economist at Jefferies International Ltd. in London told Bloomberg. "They think they have all the time in the world and they don't."

Apparently aware that the announcement was underwhelming, even by the standards of a European August, Merkel struggled to defend it -- particularly the decision not to embrace euro bonds.

"People always seem to have the feeling that there is one method that will spring us out of the crisis and in this context there seems to be that the last resource we have is euro bonds," Merkel said, according to Bloomberg. "I don't think Europe has come to its last resource and I don't think we can solve the problem with a single big bang." Rather, "we need to work steadily and step by step to win back confidence. I don't think that euro bonds will help us now with this."

The real problem is that the initiatives aren't bold. They don't go far enough. They won't stanch the financial bloodletting threatening the euro. Instead, they rely on the same wishy-washy, ineffective governance that is at the heart of the zone's troubles.

Europe already has a sprawling government, and the euro zone has long "regulated" its member states. That hasn't worked, largely because eurocrats lack real enforcement power, and have a habit of looking the other way when faced with economic realities that might ruin their vacations.

For example, euro zone members are forbidden to let their debt exceed 60 percent of gross domestic product -- a restriction enacted to prevent profligacy among members tempted by the relative ease of borrowing in euros. But that restriction has been meaningless. Italy's debt weighs in at about 120 percent of GDP. It didn't get that way overnight, but discipline was never imposed. Greece's debt is even worse, in part due to a currency swap arranged by Goldman Sachs that hid billions in debt. Regulators have known about the shenanigans for years, but chose to hope for the best.

In other words, the euro zone is based on a gentleman's agreement that's widely flouted. To rescue it, something far more powerful and effective is needed.

Jacques Attali, the founder and first president of the European Bank for Reconstruction and Development, told the Council on Foreign Relations this week that the zone will have to convert itself "from a confederation to a federation" soon, or the face extinction. He said the zone has "twelve months" to make "real progress [creating a] federal budget, euro bonds, and strict coordination of nation-state budgets, [or] the euro will disappear; Germany will get out."

That's a tall order for the continent. Citizens haven't been all that enthusiastic in recent years about European integration. Its constitution was rejected by both the Netherlands and France, for example. Moreover, greater unity will no doubt be quite costly for the wealthier, more industrious nations. But a collapse of the euro zone would be painful as well.

And so, as with so many initiatives meant to address the crisis, Merkozy's announcement today fell short of what's needed to avert possible collapse. Perhaps the heat will have to rise faster before the leaders gain the political courage (and cover) needed to take such meaningful action.

For now, the euro zone contagion is migrating from the periphery to the core economies. In Spain and Italy, interest rates are rising and the governments are tottering toward a possible debt trap. In France, investors are dumping shares in banks, which hold a fortune in dubious debt, and the government's credit rating is rumored to be at risk of a downgrade (although credit agencies deny this). And the economy of Germany, the motor of the euro zone, is stalling, reporting only 0.1 percent growth in the past quarter.

It may be only a matter of time before that heat rolls in.