My mother, the Hamburger U. professor

Mom went from Finnish farm girl to McDonald's teacher. Only now do I realize how hard the transition must have been 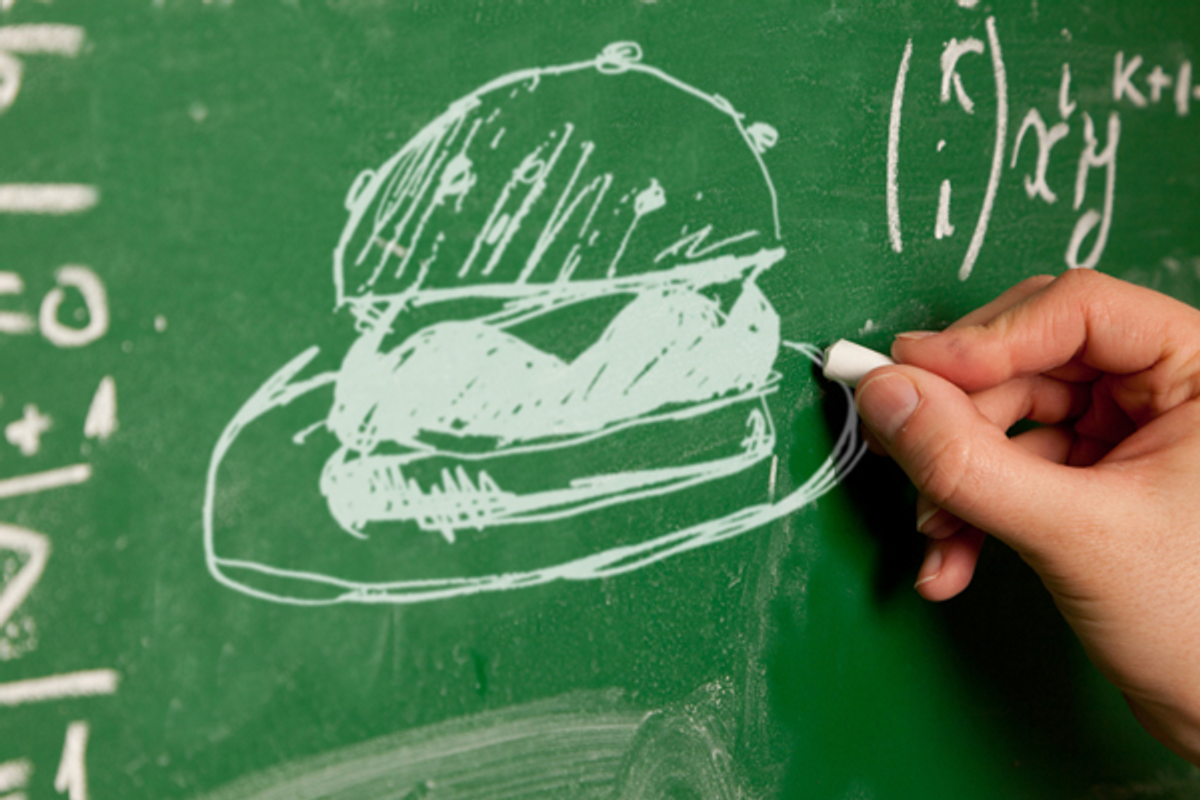 The odd thing about my mother, who grew up in Finland drinking cream from the cows on her family's farm and feeding herring out of the nets to the herding dog, is that she moved to America and worked for McDonald's. In 1989, the company hired her as an interpreter at their corporate campus in Oak Brook, Illinois. And so, for the next 12 years, the Finns at Hamburger U. learning to run a fast food restaurant through a microphone in their ears were listening to my mother.

Finland and McDonald's may seem an odd pairing to those who associate the former with forests and socialism, and the latter with obesity and corporate greed. Indeed, my mother hardly embodies the McDonald's brand. She's bone-thin, elegant, and has a vaguely European sophistication -- her sweet tooth is satisfied with a nickel-sized morsel of dark chocolate and she'll go three years without saying "like." But she also has a specifically Finnish industriousness, a self-sufficiency Finns recognize as born of a long history of hostile borders and surviving off the land. She guts and skewers, pickles and preserves. A few days ago I watched her use the last embers of a bonfire to cook a whole pike, which she wrapped in seawater-soaked pages from the Helsinki newspaper before jamming it into the ashes. This woman -- the only person I've ever seen to mill her own wheat berries for flour outside of an anthropology textbook -- deeply admires a company that sells nuggets of L-shaped chicken for a dollar to people in cars. Now as a grown-up -- and one who sees McDonald's as a greedy peddler of fatty trash -- I marvel at this paradox and try to account for her unshakable loyalty to the company.

As a kid, I saw nothing odd about the relationship between my mother and McDonald's. The McDonald's our family knew was a force for good: Traveler's helpmeet, employer of scrofulous teens, international promoter of clean toilets, and valiant opponent of illegitimate royalist upstart Burger King. On road trips, we would rather be found dead of starvation in our Chrysler Voyager than eat at Burger King. As we passed one, somebody in our family might talk about "a friend of a friend" who ate a Whopper and died. Until I was at least a teenager, I possessed the unexamined belief that Burger King was evil. Not a worse burger-purveyor; evil. Evil like East Germans in Cold War movies. And so we never questioned why McDonald's, the Good Guys, would call our mother to its mysterious academy every year.

I was eight when she started, old enough to understand that "Hamburger U." referenced the McDonald's menu but not old enough to find it even remotely silly. My father taught at a university, and so I imagined Hamburger U. as a bustling academy, a place where the Hamburglar wasn't a petty thief but a tenured professor, his cape billowing like a Cambridge don's as he crossed campus. My sister reports having made the same categorical assumption: "Princeton, Yale, Hamburger." In some ways my fantasy was right. Fact: My mother holds a McDonald's "Bachelor of Hamburgerology."

Over time, the McDonald's logo suffused our home. We had so many branded notepads and folders that I always half-expected to find meat grilling next to the binders at Office Max. One year, my mother came home from Hamburger U. with a takeout McDonald's bag. When I reached to unfurl its rolled lip, my fingers tapped against porcelain: It turned out to be a trompe l'oeil sculpture -- hard, gleaming proof of the wizardry practiced at the meat-themed Oz where my mother worked. My mother felt legitimately privileged to be able to order these kinds of exclusive McDonald's merchandise. "The windbreakers were very high quality," she said once, "but I just didn't need a windbreaker." Not at issue: that the garment would be blasted with McDonald's branding, maybe printed with a picture of a Big Mac, all-beef patty glistening under the baritone script "SPECIAL SAUCE." That was the image on our playing cards.

Exclusive merchandise was just one of the perks that awaited my mother at Hamburger U. She was invited to participate in tastings at the lab, and I imagined her blindfolded, a man in a toque coaxing language from her: "Can you describe the base note in the McSauce? More black currant or burnt leather?" My younger sister mistrusted McDonald's' use of our mother as a guinea pig, though, particularly after one year when, as my sister recalls, "They made mommy eat a styrofoam hamburger box. I remember. She said it was 'just OK.'" My mother doesn't remember this episode, but would not rule it out.

The truth was she loved her weeks at Hamburger U., steaming in the campus sauna with the Finns, hiking on the wooded campus trails. "There was a beautiful lake you passed on the way to the conference center... it always had ducks on it," she recalled recently. A moment later: "I think the ducks were plastic."

She was talking about Lake Fred, an artificial lake named for Fred Turner, CEO from 1973 to 1987. I've been to the campus. The ducks are either plastic or really well trained. Either way, did you know there are 187,000 lakes in Finland, and that Finland is often called "The Land of a Thousand Lakes"? Looking at Lake Fred, with its simpleton's oval border and bobbing decoys, you would expect a Finn to say, "Oh I've seen lakes! This is no lake, this is a bath drawn for a baby." And yet, Lake Fred impresses my mother.

I guess it's possible that my mother, through annual incantations of the training manual, accidentally indoctrinated herself with company loyalty, but I think that's not quite it. Even 12 years into her career, she was captivated by figures like Turner and Ray Kroc, whose stories she'd translated in the curriculum's "History" lessons. She doesn't tire of telling you that Fred Turner started as a grill operator and rose his way up in the ranks one grueling, fat-splattered station at a time. Or that Ray Kroc, the milkshake machine vender who began to build McDonald's at age 56, never shied away from doing anything himself. "If he saw a dirty table, he took a rag and cleaned it," she'll say, admiringly. In her eyes, Ray Kroc, rather than the profit-chasing grandfather of the global spread of fast food, is on the contrary a kind of honorary Finn, a humble egalitarian with a rag in his belt, always ready to get his hands as dirty as the new hire's.

And yet, Finland hasn't been McDonald's' easiest market: In both franchise number and overall sales, McDonald's is second to Finland's indigenous fast-food chain, Hesburger, a company whose roots are in Turku, my mother's hometown. Probably outdone by Hesburger, the big McDonald's on the central market square in Turku is closed now, but it was a franchise we knew well. In addition to regular summer rituals like foraging for chanterelles by the moose-paths in the woods or lying out on my grandfather's dock, still tanning at 8 pm in the endless arctic sun, we went to that McDonald's at least once a summer. My siblings and I looked forward to accompanying my mother as she got V.I.P. treatment from her former trainees at every McDonald's in Finland, flanking her like guards attending Steven Spielberg at The Ivy while the solicitous manager would give us a mansikkapirtelö (strawberry milkshake) on the house and asked if the tuplajuustohampurilainen (double cheeseburger) was up to code.

At this Turku franchise, my mother once worked a shift as an entry-level crew member as part of her own training. She manned the McFlurry machine to cut down on order-filling time, noticed the ladies' room was a mess and wheeled out a mop. "I felt very useful, I had done some good things," she commented after, the ghost of Ray Kroc's table-rag hanging in her rough, capable hands.

There's a certain point at which the children of immigrants have to give up trying to understand their parents' strange and selective relationship with America. All I want is her Finnish childhood, her herring-fed herding dog, the romance of my Finnish summers year-round. And meanwhile, she wants to learn how to shave seven seconds off a lunch order at the Turku McDonald's.

But sometimes, she drops clues. About her own childhood, she remembers never hearing the words "hyvää päivänjatkoa" said by Finns to one another. Her theory is that only with the arrival of McDonald's in Finland, and with it, Ray Kroc's requirement that every customer be greeted politely, did Finns, traditionally so stingy with their words, warm up to the expression. It means "Have a nice day."

Julia Langbein is a writer based in Chicago. She has written for Artforum.com, New York Magazine's Grub Street blog, Gourmet magazine and gourmet.com. She is also a Ph.D. candidate in art history at the University of Chicago, where she's writing a dissertation about satiric art criticism, which is something that used to exist.