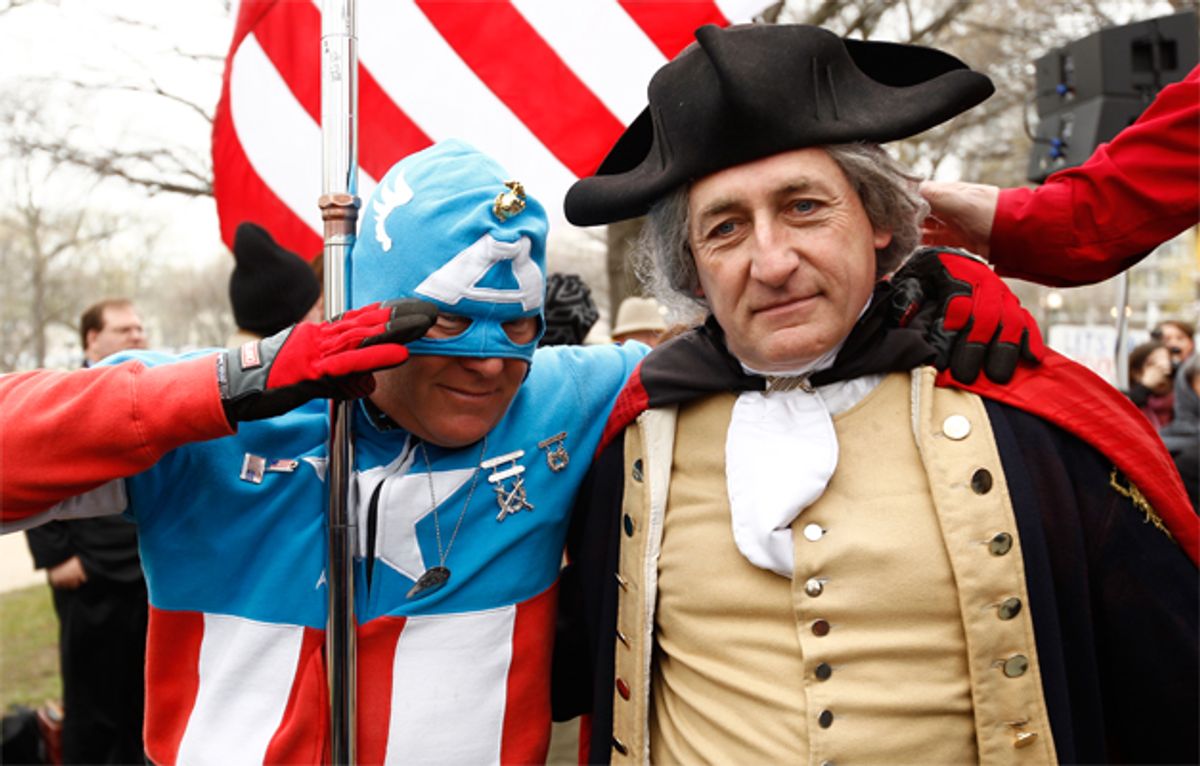 There is a shadowy group of malcontents in America today, plotting a grand takeover of our political institutions in order to completely remake the country according to their wishes. Despite the fact the members of this group are a small minority of the population, and an unpopular one at that, they seek to infiltrate the courts and the government at every level, in order to replace our long-standing system of law with their own extremist, undemocratic religious code. These true believers are especially dangerous because they think they're doing God's work, and you ignore them, or play down the threat they pose to America, at your own risk. This tiny band of fanatics is largely distrusted and despised by regular Americans, but a terrified media coddles them and pretends they're harmless. I am speaking, of course, of the Tea Parties, a group now officially less popular among Americans than Muslims.

Professors David E. Campbell and Robert D. Putnam have a column in today's New York Times explaining that the Tea Party movement is made up largely of ultra-religious ultra-conservative Republican partisans (shocker?), and now that America has caught on to this fact, the Tea Party people are much less popular than other groups who largely seek to mind their own business:

Polls show that disapproval of the Tea Party is climbing. In April 2010, a New York Times/CBS News survey found that 18 percent of Americans had an unfavorable opinion of it, 21 percent had a favorable opinion and 46 percent had not heard enough. Now, 14 months later, Tea Party supporters have slipped to 20 percent, while their opponents have more than doubled, to 40 percent.

Of course, politicians of all stripes are not faring well among the public these days. But in data we have recently collected, the Tea Party ranks lower than any of the 23 other groups we asked about — lower than both Republicans and Democrats. It is even less popular than much maligned groups like “atheists” and “Muslims.” Interestingly, one group that approaches it in unpopularity is the Christian Right.

So it turns out that going around in funny hats screaming at people for a few years is not a great way to endear yourself to the American public, unless you're Joe Pantoliano.

Better luck with next election cycle's rebranding campaign that fools everyone in the political press for a year or so, ultra-conservative Republicans!