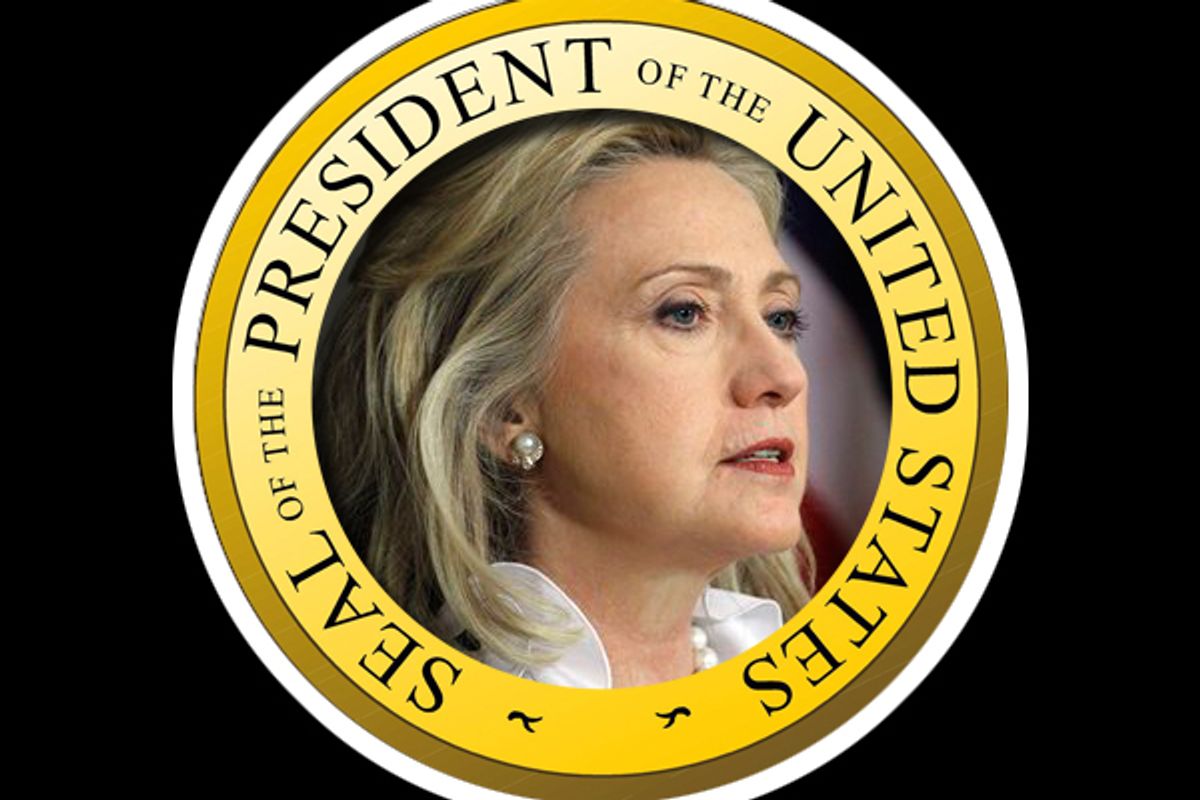 The New York Times Magazine is jumping into the Hillary for President debate with a new piece by Rebecca Traister. Citing a Daily Beast article by Leslie Bennetts, which in turns draws heavily on my initial "Run, Hillary, Run" post in Salon, Traister -- a Clinton supporter in 2008 -- tries to tamp down the growing buyer’s remorse she detects among Obama supporters. She writes:

"Rather than reveling in these flights of reverse political fancy, I find myself wanting the revisionist Hillary fantasists -- Clintonites and reformed Obamamaniacs alike -- to just shut up already."

Traister argues, persuasively in my view, that had Clinton won the presidency in 2008 instead of Obama, there’s no compelling evidence suggesting she would have been any more effective. In this she echoes points made by Jonathan Bernstein in this Salon piece. To be sure, Traister admits to her own bouts of buyer’s remorse, but she thinks publicly airing these thoughts is not helpful:

"I understand the impulse to indulge in a quick ‘I told you so.’ I would be lying if I said I didn’t think it sometimes. Maybe often. But to say it -- much less to bray it -- is small, mean, divisive and frankly dishonest. None of us know what would have happened with Hillary Clinton as president, no matter how many rounds of W.W.H.H.D. (What Would Hillary Have Done) we play."

"There simply was never going to be a liberal messiah whose powers could transcend the limits set by a democracy this packed with regressive obstructionists. That doesn’t mean we can’t hope for, seek and demand better from politicians and presidents. But we can’t spend our time focused on alternate realities in which our country, its systems and its climate are not what they are. With advance apologies for returning to one of 2008’s most infelicitous phrases, it’s time to let go of the fairy tales."

Amen to that! It’s a point that longtime readers will recognize from reading my posts on my Presidential Power blog dating to before Obama’s inauguration: that the expectations for his presidency far outstripped the reality of his actual ability to effect significant change. Although we can’t be sure, given the constraints on a president’s power, it’s hard to see how Hillary Clinton’s election in 2008 would have produced demonstrably different policy outcomes.

But who is talking about what happened in 2008? My "Run, Hillary, Run" post was about Democrats and voters more generally looking ahead to 2012! And here there is one very good reason to believe that a Clinton presidency might be marginally more effective than Obama’s second term: She would not be a lame duck president.

Recent history suggests that, should Obama win reelection in 2012 (and that is no sure thing), he will almost immediately begin losing political influence. Presidents Nixon, Reagan, Clinton and Bush all witnessed their influence slip away during their second terms. For Nixon, of course, the Watergate scandal and impending impeachment drove him from office. Reagan’s second term saw some accomplishments, including fundamental tax reform, but he frittered away a good deal of influence due to the Iran-Contra affair. Clinton, of course, had his own second-term impeachment imbroglio. Finally, George W. Bush -- Mr. Imperial Presidency -- found out in short order that the political capital he pledged to spend after the 2004 election bought him little in Congress. Despite an extensive publicity tour, he was unable to get even fellow Republicans to buy into his plan to reform Social Security or immigration law, and within two years the Democrats had regained control of both the Senate and the House, thanks in part to an unpopular war and Hurricane Katrina.

In the aggregate, then, this is not a very auspicious second-term record, and while there’s no reason to expect Obama to find himself engulfed in scandal should he win reelection, neither is there any strong reason to believe he’ll defy the historical pattern and see his influence grow. Instead, the greater likelihood is that it will begin to wane.

The reason for this seemingly inevitable decline is, I think, more structural than personal. It has to do with the loss of political acuity that accompanies the removal of the reelection imperative. Presidents begin to think historically, and, in some cases, recklessly as well. They see the end of their presidency on the horizon, and they are willing to take risks and to downplay the political constraints that they must normally navigate to achieve policy objectives. Think FDR with his second-term court-packing fiasco. (Although not subject to the two-term limit, FDR did not expect to run for a third term at that point.) Bush experienced a similar dulling of his political sensitivity. He writes in his memoirs that he made a mistake in pushing Social Security reform before immigration reform, since the latter had a greater chance of securing bipartisan support. The failure of the first doomed the second, he believes. He writes, "If I had to do it all over again, I would have pushed for immigration reform, rather than Social Security, as the first major initiative of my second term." Instead, he went for the riskier reform first, and lost both.

It is possible Obama may be the exception to this rule. But we shouldn’t count on it. Nor, however, should we expect a Clinton first term to be a reprise of FDR’s celebrated 100 days. We don’t want to fall prey again to the overly optimistic "liberal messiah" scenario. Instead, in concert with Traister’s argument, I would expect a Clinton first term to be perhaps even less productive, legislatively, than Obama’s first four years, in large part because she would likely be facing a Republican-controlled Congress. The one advantage she might have is that economic growth may start accelerating during her four years. All this is speculation, of course. The takeaway point is that, in deciding whether to jump on the Hillary bandwagon, Traister’s is the wrong question. It's not "What Would Hillary Have Done?" It’s what can she do, in her first term, compared to Obama in his second?