With sly nods to the past and fun modern touches, a horror reboot is both clever and chilling 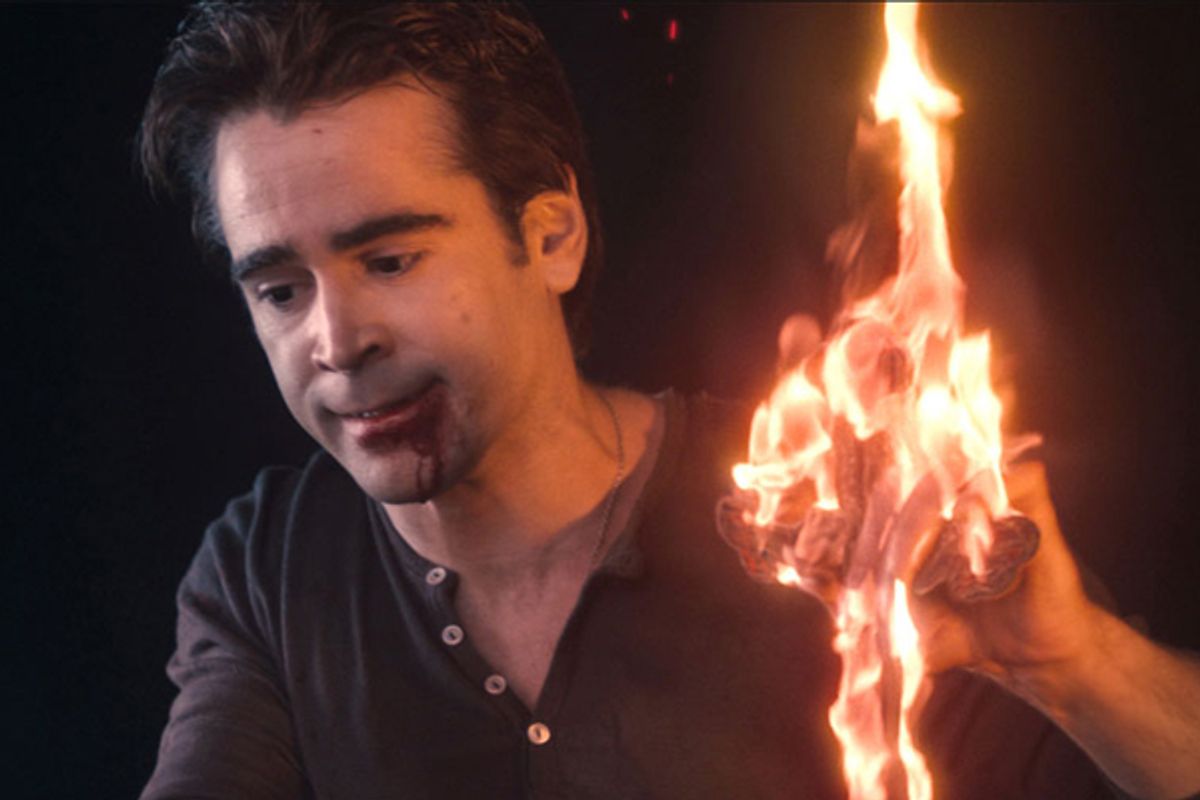 Colin Farrell started his career as an acclaimed actor in films like "Tigerland," but for years, the impossibly eyebrowed Irishman seemed better known for his epic debauchery than his movies. He kept taking creative risks, but "Alexander"? "Cassandra's Dream"? Seriously, who cares? But somewhere around the brilliant "In Bruges," Farrell found his unique and darkly hilarious groove. And as Jerry, the nonthreateningly named but unmistakably lethal bloodsucker in "Fright Night," Farrell looks like he's having the time of his 400-year-old life.

The original "Fright Night" was a sly mini-masterpiece -- a blend of self-referential goofiness and genuine chills that helped pave the way for the droll horror of the "Scream" franchise and "Buffy the Vampire Slayer." It makes perfect sense, then, that the new version was written by veteran "Buffy" scribe Marti Noxon. And she's fully in her zone here, infusing the film with clever gags, quiet dread, scream-in-your-seats shocks and unexpected moments of creepiness. And for the horror faithful, there are enough casual references to both "Buffy" and the original "Fright Night" to stave off cries of sacrilege.

But the remake also modernizes in fun ways -- from characters' use of lock-picking phone apps to its employment of 3-D. I've never been a 3D-fan, but here -- with vampire talons and fangs that leap out at the audience, exploding fireballs and whizzing arrows -- it makes campy sense. The technology doesn't seem remotely like fancy "Avatar" shtick; it's more like classic "House of Wax" fun.

As with the 1985 version, the plot centers on dweeby teenager Charlie Brewster, whose world is turned upside down when a new neighbor turns out to have deadly appetites -- and an eye for his mom (Toni Collette). And like the original, the movie's title refers to both the bloodthirsty menace next door and a campy horror show hosted by a lame showman. But this time around, the "Fright Night" within "Fright Night" is a Las Vegas revue. Its maestro, Peter Vincent (former "Dr. Who" star David Tennant, no stranger to beloved cult classics) is now an eyelinered, egomaniacal, Midori-swilling cross between magician Criss Angel and Russell Brand's Aldous Snow, a man whose entire personality is his greatest illusion.

Director Craig Gillespie ("Lars and the Real Girl") coaxes lively performances out of most of his cast, notably Tennant, whose Vincent is a noble soul shrouded in bravado and too-tight leather pants. The only glaring misstep is that as Charlie, Anton Yelchin is so blandly unweird that neither his vampire obsessiveness nor his hot girlfriend seems entirely convincing. Watching the ever reliable Christopher Mintz-Plasse as his dorky yet authentically poignant pal Ed, it's hard not imagine how much bolder the film might have been with him as the unlikely vampire slayer.

Yet the movie belongs, heart and soul, to Farrell. Conspicuously sniffing around for blood, slouching in doorways and purring, "Hey guy," he's at once self-mocking and utterly menacing -- and almost as despicable as his paunchy cokehead character in "Horrible Bosses." There's an air of swaggery freedom about his Jerry; he's amused and intense at the same time. It's the knowing cockiness that he can do whatever he wants, and the audience will be helplessly mesmerized. And he's right.