Getting to know the Tea Party

It's the GOP's white conservative base in silly costumes. Why couldn't the media figure that out sooner? 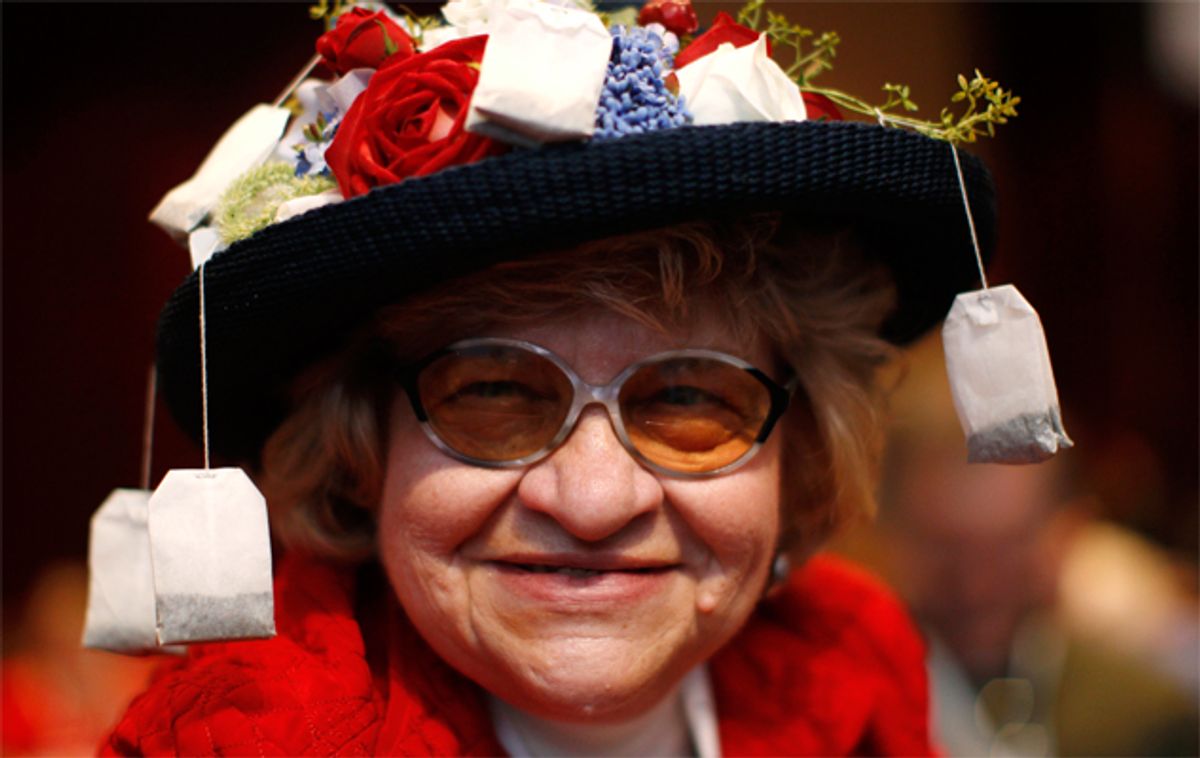 Scholar Robert Putnam, best known for his study of American atomization in "Bowling Alone," has produced new data on the Tea Party and it's being billed as a shocker. Sit down before you read this: They are older, white conservative Christians "who were highly partisan Republicans long before the Tea Party was born."

Not surprised? Neither was I, but the research is actually fascinating. Putnam and Notre Dame's David Campbell tracked the role of faith and politics for their last book, "American Grace: How Religion Divides and Unites Us." They went back to look at attitudes toward the Tea Party among 3,000 survey respondents for the paperback edition, and wrote an Op-Ed in Wednesday's New York Times.

Some of their key findings: "Even compared to other white Republicans, [Tea Party backers] had a low regard for immigrants and blacks long before Barack Obama was president, and they still do." They're not a product of the Great Recession, Campbell and Putnam write. "Many Americans have suffered in the last four years, but they are no more likely than anyone else to support the Tea Party." Big government isn't the issue that drives them: "Concern over big government is hardly the only or even the most important predictor of Tea Party support among voters." They are social conservatives who believe religion should play a strong role in politics: 76 percent said our "laws and policies would be better if more elected officials were deeply religious."

It's great to have data, but this is something a lot of us believed all along -- the Tea Party was the Republican base dressed up in silly costumes. Why was the media so quick to declare them a vital new force in politics? Of course there were some innovative twists on the old mix, but those details got less attention than the supposedly spontaneous democratic uprising (against the Democrats, of course). What enlivened the GOP base and made it look brand-new was the cash and savvy of the Koch brothers, Dick Armey and Americans for Prosperity, who quickly noticed small early anti-stimulus rallies and got some of the organizers money and logistical support, so they could spread their Astroturf.

Most important was the role of Fox News, which did energetic publicity for the early Tea Party rallies. Richard Nixon's media aide, Roger Ailes, finally figured out how to turn his supposed Silent Majority into a Noisy Minority. Glenn Beck founded one of the early groups, the 9/12 movement. The San Francisco Tea Party I attended in April 2009 was promoted by the local right-wing radio station KSFO, home of Rush Limbaugh, at one time Michael Savage, and a host of other righties like Melanie Morgan, who whipped the crowd into an anti-government frenzy that day. A man carrying an "Obama = Imposter" sign handed out fliers demanding that Nancy Pelosi begin impeachment proceedings, because Obama, he told me, "is not a natural-born citizen." There were several hammers and sickles; lots of signs warning against socialism and communism; a guy in what seemed to be a coonskin cap carrying a big sign with a gun that read "Reload for the Revolution."

Contrary to the Tea Party’s "origin story," Campbell and Putnam write, in which the new activists were often described as "nonpartisan political neophytes," they were "highly partisan Republicans long before the Tea Party was born, and were more likely than others to have contacted government officials. In fact, past Republican affiliation is the single strongest predictor of Tea Party support today."

The role of race is nothing new. A New York Times survey as well as a University of Washington study found Tea Party members more likely even than other Republicans to say that too much has been made of the problems facing black people, that the Obama administration favors blacks over whites, and to blame black disadvantage on the shortcomings of black people, rather than on the legacy of slavery and discrimination. Is it only about having a black president? Um, that probably doesn't help. But it's worth noting that these are the same people who've been fighting the Democratic Party since the days of the Civil Rights Act, the Voting Rights Act and the beginning of the War on Poverty, almost 50 years ago. They associate those long overdue social reforms with giving folks, mainly black people, something they don't deserve. I sometimes think just calling them racist against our black president obscures the depths of their hatred for Democrats, period.

Their far-right religious zealotry is an old story too. We act as though the separation of church and state was a question settled by the Founders, but from the country's earliest days many Americans believed that only white Protestants are qualified for democracy. There's a through-line from the evangelical Protestants who burned down Catholic churches and convents in the 19th century, who believed in a religious test for American citizenship, to Texas Gov. Rick Perry and his evangelical-Christians-only Christapalooza in Houston last weekend. Perry's preacher friends include Catholic bashers who'd make Lyman Beecher proud. We've been fighting this impulse for a long time.

The good news, though? To know the Tea Party is not to love them. CBS/New York Times polls show that disapproval of the Tea Party movement doubled between April 2010 and June 2011, from 18 percent to 40 percent in 14 months. Putnam and Campbell found the Tea Party "ranks lower than any of the 23 other groups we asked about -- lower than both Republicans and Democrats. It is even less popular than much maligned groups like 'atheists' and 'Muslims.' Interestingly, one group that approaches it in unpopularity is the Christian Right." Let's hope Republican politicians, and even our over-conciliatory Democratic president, sees the growing unpopularity of the Tea Party movement, and stop letting them run the country.

I talked about the Tea Party data with David Campbell on MSNBC's "Hardball" today: