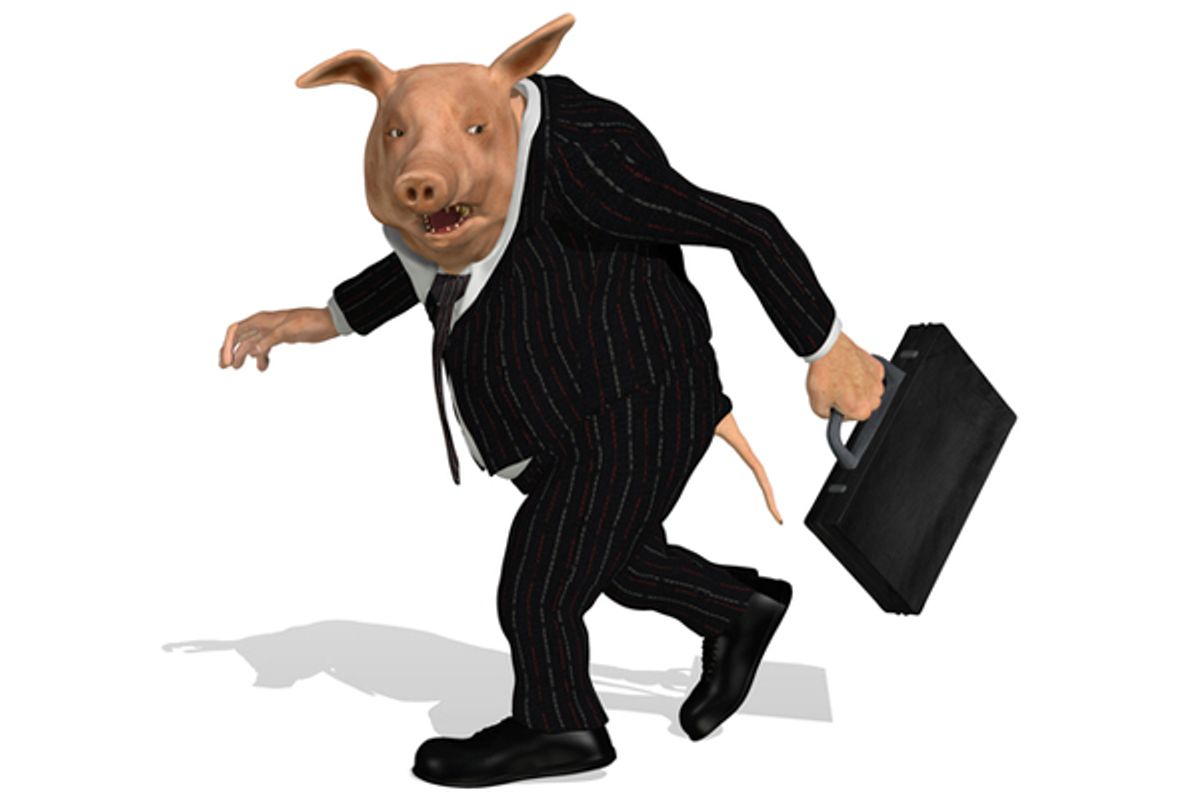 By now the story is familiar. For the last decade US-based business corporations have been engaged in the massive offshoring of good jobs to high-growth, low-wage areas of the world, especially China and India. In general, these companies have found offshoring to be immensely profitable. For working people in the United States to gain some benefit from this globalization process, US-based corporations must repatriate some of their foreign profits to invest in high value-added job opportunities back home.

Yet prevailing US tax law both encourages offshoring and discourages the repatriation of profits. In principle, US individuals and corporations are supposed to pay US taxes on their worldwide income. Through an overseas tax deferral law, however, a US company does not pay the 35 percent corporation tax on foreign earnings until it repatriates these profits to the United States. The tax law gives US corporations an added incentive not only to offshore employment but also to reinvest the earnings of offshored operations outside the United States.

The deferral law has a long history, dating back to 1960 when the Eisenhower administration wanted to encourage an expanded US business presence around the world. From 1961 to 1963, President Kennedy tried, without success, to get rid of the law, arguing that it resulted in the export of US jobs and deprived the United States of tax revenues. Since then, the Democrats have tried from time to time to rescind this corporate tax privilege.

In June 1976, for example, an attempt to overturn the law narrowly failed in the US Senate. As observed in the Wall Street Journal just before the Senate vote: "Closing some tax 'loopholes' of corporations and the rich is required for its own sake, liberals say, and to help finance full extension of last year’s tax cuts and an immediate tax break for retired persons." (From "Senate Liberals to Renew Attempts at Cut In Tax Benefits for Corporations, the Rich," June 28, 1976). On the day after the vote, the New York Times reported: "The defeat by a vote of 45 to 44 was another in a series for organized labor and its supporters in the Senate who charge that thousands of United States jobs are lost because multinationals are encouraged by the deferral tax advantage to build plants overseas." (From "Tax Law Retained for Multinationals," June 30, 1976).

Fast forward to February 2004 when Sen. John Kerry, a declared candidate for the Democratic presidential nomination, issued a press release that indicated his objection to the tax deferral law in no uncertain terms:

My economic policy is not to export American jobs, but to reward companies for creating and keeping good jobs in America. Unlike the Bush Administration, I want to repeal every tax break and loophole that rewards any Benedict Arnold CEO or corporation for shipping American jobs overseas.

The preferred approach of the Bush administration to inducing repatriation of foreign profits was the Homeland Investment Act as part of the American Job Creation Act of 2004. It provided a corporate tax rate of 5.25 percent for profits repatriated in one fiscal year, with the stipulation that these profits had to be used for investments that create jobs. The Act expressly prohibited the use of these funds to pay dividends or do stock buybacks. US corporations responded by repatriating $299 billion in profits in 2005, compared with an average of $62 billion in 2000-2004, and a subsequent decline to $102 billion in 2006.

A persistent promise in Barack Obama’s campaigns for the Senate in 2004 and the presidency in 2008 was that he would end tax breaks for corporations that ship jobs overseas. True to his word, in a speech in May 2009, President Obama declared: "It’s a tax code that says you should pay lower taxes if you create a job in Bangalore, India, than if you create one in Buffalo, New York." In June 2009, Microsoft CEO Steve Ballmer responded that an end to the overseas tax deferral would make "U.S. jobs more expensive" and that if the Obama administration insisted on changing the tax law, Microsoft would be "better off taking lots of people and moving them out of the U.S." In September 2009, the Obama administration met with US high-tech executives and agreed to shelve the plan to end the tax deferral.

Nevertheless, in his State of the Union address on January 27, 2010, President Obama insisted that "it is time to finally slash the tax breaks for companies that ship our jobs overseas and give those tax breaks to companies that create jobs right here in the United States of America."

This tax loophole has not yet been closed. Indeed, in October 2010, John Chambers, chairman and CEO of Cisco Systems, and Safra Catz, president of Oracle, published an op-ed in the Wall Street Journal in which they sought to counter criticism in the press that US corporations were sitting on one trillion dollars in cash instead of investing in jobs in the United States. The two high-tech executives claimed that US corporations were holding the cash in question overseas and recognized that these funds "could be invested in U.S. jobs, capital assets, research and development, and more" if US corporations had an incentive to do so. "But," they continued, "for U.S. companies such repatriation of earnings carries a significant penalty: a federal tax of up to 35%. This means that U.S. companies can, without significant consequence, use their foreign earnings to invest in any country in the world -- except here."

Having deftly transformed an existing government tax concession to US corporations into a tax penalty on US corporations, Chambers and Catz noted that, among other things, repatriated profits could "provide needed stability for the equity markets because companies would expand their activity in mergers and acquisitions, and would pay dividends or buy back stock." To lure the $1 trillion back to the United States, they proposed a 5 percent tax on repatriated profits that would yield the US government a quick $50 billion, which could then "be used to help put America back to work…[by giving] employers -- large or small -- a refundable tax credit for hiring previously unemployed workers (including recent graduates)." "Such a program," they crowed (their plan having saved their companies 30% in taxes on foreign profits), "could help put more than two million Americans back to work at no cost to the government or American taxpayers. How’s that for a good idea?"

Along with other business executives, Chambers presented his "good idea" directly to President Obama at the White House on December 15, 2010. In mid-January 2011, Treasury Secretary Tim Geithner met with a dozen CFOs who pushed for an end to taxes on foreign profits on the grounds that it would make US companies more competitive internationally. In his State of the Union address on January 25, 2011, Obama mentioned innovation 11 times, but made no mention of the repeal of the tax deferral law to help finance it. Instead, he just exhorted Congress to simply the tax system: "Get rid of loopholes. Level the playing field. And use the savings to lower the corporate tax rate for the first time in 25 years -- without adding to our deficit." This past July, in Congress, the "Gang of Six," lobbied by the Business Roundtable, pushed for an end to the taxation of foreign profits.

With this kowtowing to corporate interests and their constant quest for "maximizing shareholder value," it is no wonder that neither Obama nor Congressional Democrats can come up with a jobs plan. Like it or not, the US economy is an autocratic corporate economy in which the CEOs of major corporations must take the lead in investing in innovation and job creation for a jobs plan to have a significant and sustainable impact. That was true in the era of Dwight D. Eisenhower and it is true in the era of Barack H. Obama.

Back then, however, US corporations were still focused on investing in the US economy, and they had not yet succumbed to the debilitating ideology that corporations should be run in the name of shareholder value. Top corporate executives, not President Obama or Congress, are the ones who control the resources to create jobs in the business sector and pay the taxes to support job creation in the government sector. These business leaders have, however, taken a hike on the nation, and indeed even on the working people and taxpayers who built the very business organizations that have made them so incredibly powerful and rich.

William Lazonick is director of the UMass Center for Industrial Competitiveness and president of The Academic-Industry Research Network. His book, "Sustainable Prosperity in the New Economy? Business Organization and High-Tech Employment in the United States" (Upjohn Institute 2009) was awarded the 2010 Schumpeter Prize.

William Lazonick is professor of economics and director of the UMass Center for Industrial Competitiveness. He is president of the Academic-Industry Research Network. His book, "Sustainable Prosperity in the New Economy? Business Organization and High-Tech Employment in the United States" (Upjohn Institute, 2009) won the 2010 Schumpeter Prize.