Is there a remotely piloted jetliner in the foreseeable future?

No way. But some are still skeptical, despite my best efforts. Here's one last shot at convincing you holdouts 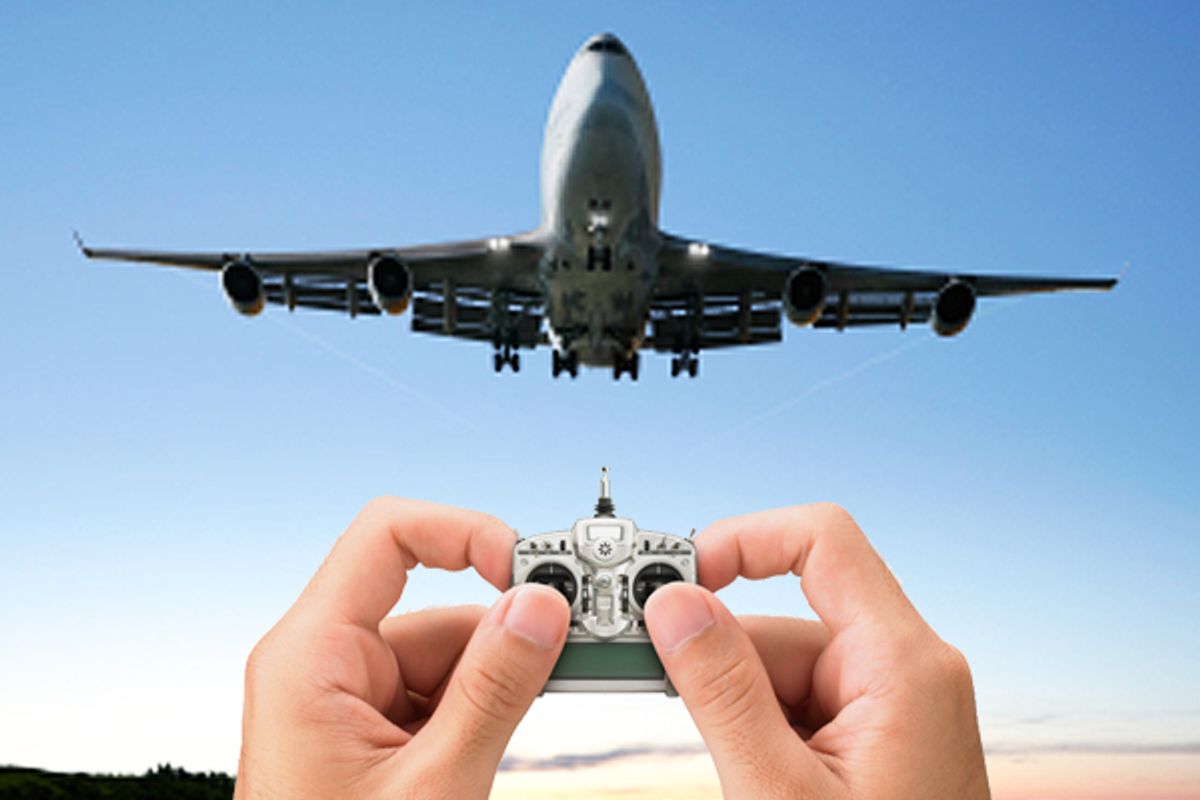 No doubt you're tired of listening to me lecture about myths of autopilots and automation, and how the idea of remote-control airliners is a lot more far-fetched than certain researchers and academics make it out to be. Just a few loose ends, I promise ...

The most effective, and probably the most fun way of making my point, I think, would be through a demonstration in a flight simulator. Cost and practicality make that pretty much impossible, however, and so you're stuck with me writing about it.

And in doing so, either I'm a lousy wordsmith or my audience is a lot more stubborn than is healthy or reasonable. Because as hard as I try, I just can't put the skeptics out of their misery.

"Well, you are an airline pilot," emailed one reader, whose doubt was so palpable I could feel it oozing through the screen. "So I suppose we should take your word for it as to how planes are flown."

No, really. Take my word for it.

Most readers aren't as cynical (or insufferable), and are willing to trust me -- though not always fully.

Which is fair, I guess. Despite my best efforts, I've probably left some questions unanswered -- and others not answered with the conviction they deserve. That's the way it will have to remain, I'm afraid. Trying to explain the art and science of flight to a layperson is an extraordinarily difficult thing. And there is only so much that I have the time, the patience and, frankly, the talents to make clear.

And no matter; people like Missy Cummings, with their splashy credentials and even splashier ideas, manage to reach a far broader audience than I do. It's a losing battle. My only comfort, I suppose, is knowing with 100 percent certainty that none of you will be stepping on board a remotely piloted jetliner at any point in the foreseeable future.

One more shot, though, before letting this go. The challenges -- and my responses -- below are from a letter by "dizuel," posted in the Salon forum following my column on Aug. 4. The letter does a good job of encapsulating that lingering sense of incredulity. My responses, cranky and impatient as they are, may or may not be convincing. I'll leave that up to you. If nothing else, it's an addendum to my earlier rantings on the topic.

"I think you have established that aircraft are not flown automatically today. That the capability for autoland exists and is functional, but rarely used. But you have not established why aircraft could not be flown without pilots someday. If the capability exists, then why could some future version not handle takeoffs and landings on a regular basis?"

For one, because this isn't about takeoffs and landings. For all intents and purposes, takeoffs and landings are the easy part. The hard part is dealing with all of the many contingencies, large and small, that arise during any commercial flight. As I've said before, a flight is a very organic thing. For all of its scripted protocols -- checklists and SOP -- hundreds of subjective decisions are made by the crew, from deviating around a cumulus buildup (how far, how high, how long) to troubleshooting a mechanical issue to handling an on-board medical problem. I'm not talking about Sully-esque emergencies, but the run-of-the-mill situations that arise every single day, on every single flight. I cannot fathom the idea of these things being handled remotely.

I know that it works for military drones and unmanned aerial vehicles. These machines are very sophisticated, obviously. But a drone is not a commercial jet carrying hundreds of people. It has an entirely different mission, and operates in a wholly different environment -- with far less at stake should something go wrong. You don't simply take the drone concept, scale it up, throw in a few redundancies and off you go.

Adapting the UAV model to the commercial realm would require, in addition to gigantic technological challenges, a restructuring of the entire commercial aviation infrastructure, from airports to air traffic control. We're talking hundreds of billions of dollars, from the planes themselves to the facilities they'd rely on. We still haven't perfected the idea of remote control cars, trains or ships. The leap to commercial aircraft would be harder and more expensive by order of magnitude.

And for what? You'd still need human beings to operate these planes remotely. Thus I'm not sure what the benefit of this would be in terms of cost.

"Take the A380 engine failure some months ago. The crew did an amazing job saving that airplane. Could that have been done remotely? You could argue it could have ... Remote cameras can provide visuals of any part of the aircraft. And, since they are not actually on the plane, the crew may be able to react in a calmer and more calculated manner."

They also may not get a full and realistic sense of what, exactly, is happening -- not to mention the complexities of dealing with cabin crew and hundreds of passengers. Again, these situations tend to be organic and subject to all sorts of subjective decision-making -- much of which would be apparent from afar. If you ask me, about the easiest way of turning a minor problem into a catastrophe would be to move the crew thousands of miles away.

"It is the ugly side of progress -- many valuable skills from the past are being commoditized. It sucks. But it's life. The reason why piloting went from being a high-paying job to a low-paying job is because it has become easier. More people can do it, and thus the supply has overwhelmed the demand."

Sure, modern automation means there's a reduced workload in certain regimes of flight than there used to be. But, if you're going to tell me that flying a contemporary Boeing or Airbus is "easier," in terms of required expertise and knowledge, than flying earlier generation planes, you're simply wrong. On the contrary, I submit that it's considerably harder once you account for all of the operational aspects of modern flying -- not merely the hands-on aspects of driving the plane and running its systems, but familiarity with everything else that a flight entails: planning, navigating, communicating and so on. The emphasis is on a somewhat different skill set, but the volume of requisite knowledge is greater than it used to be.

And the reason piloting became a lower-paying job (in places) is mostly a function of bottom-line economics. Pilots once earned more because the companies they worked for used to be a lot more profitable. The regional airline sector, meanwhile, has essentially tripled in size in the last quarter-century or so, dragging down the average wage substantially. Regional pilots are the lowest-paid, yet in terms of both technical skills and general career challenges, theirs is arguably the most difficult job of all.

"What you have to provide is a strong argument that flying an airplane is immune to progress and the relentless advance of technology."

No, I don't. Why is elimination of the pilot the inevitable endpoint of this technological evolution? I've never understood that. Are modern medical advances striving to eliminate surgeons from operating rooms? What exists in the cockpit today is already a fine example of how progress and technology have improved flying -- making it faster, far safer and more reliable than it once was. But it has not made it easy, and it is a long, long way from engineering the on-board pilot out of the picture -- something we needn't be looking for in the first place. I am not against the advance of technology. I am against foolish extrapolations of it.

And with that, I declare this discussion over. At least until the next annoying Discovery Channel segment or Popular Science feature gets the whole thing foaming again.

Below are some thoughts from an Airbus A330 captain (he wishes to remain anonymous), tackling some common presumptions regarding what went wrong aboard Air France Flight 447 two years ago. This is the kind of technical commentary I normally stay away from, but it represents a point of view the media has hardly touched on during its analysis of the most recent findings: that perhaps the engineering of the A330 itself played an important role. This is by no means to imply the A330 is an unsafe aircraft. However, focusing solely on pilot error is remiss, and neglects to consider the complexity of the situation -- and possible idiosyncrasies of the airplane. And with our just-concluded conversation in mind, somewhere in here, perhaps, we see the dark side of putting too much faith in automation. (I've edited the letter for clarity.)

We know the airplane stalled, but the interim reports do not detail how the Air France pilots reached this point in the first place. No way do I believe that the pilots manually commanded an extreme nose-up input, as the report is claiming. To say that a pilot would, for an "unreliable airspeed event," initiate a 7,000-foot-per-minute climb, with 16 degrees of nose-up input, is crazy.

But the electronic flight control system (EFCS) of the A330 is capable of generating this magnitude of performance on its own, if, say, the overspeed protection mode was activated by the blocked pitot probes. This is what the A330 simulator displays when this fault is inserted. The auto trim also runs up to about 13 degrees of nose-up trim -- the same figure mentioned in the interims -- and reduces the nose-down authority for the resulting stall.

The pilot cannot override the EFCS quickly when it is misbehaving. The checklist procedures for this are time-consuming and confusing. The "unreliable airspeed" checklist is also ineffective if the EFCS takes control of pitch, as the pilot is locked out.

Meanwhile, operators have since received a "reminder" from Airbus regarding re-engagement of an autopilot after an unreliable airspeed event, because the aircraft can experience a pitch-up command. Maybe that explains how the nose got so high? After all, it is instinctive for pilots to try to re-engage a second or third autopilot if one for whatever reason disengages, as it did on Flight 447.

Additionally, the plane's warning systems were presenting a flood of fault messages, aural chimes and alarms; at the same time the pilots were confronted with impending loss of control due to high angle-of-attack, and stall, at night, in bad weather, without knowing which instruments to trust with their lives.

This is pushing the limits of what a pilot can synthesize and react to.