Is a weak presidency real or an excuse used to justify Obama's failures? 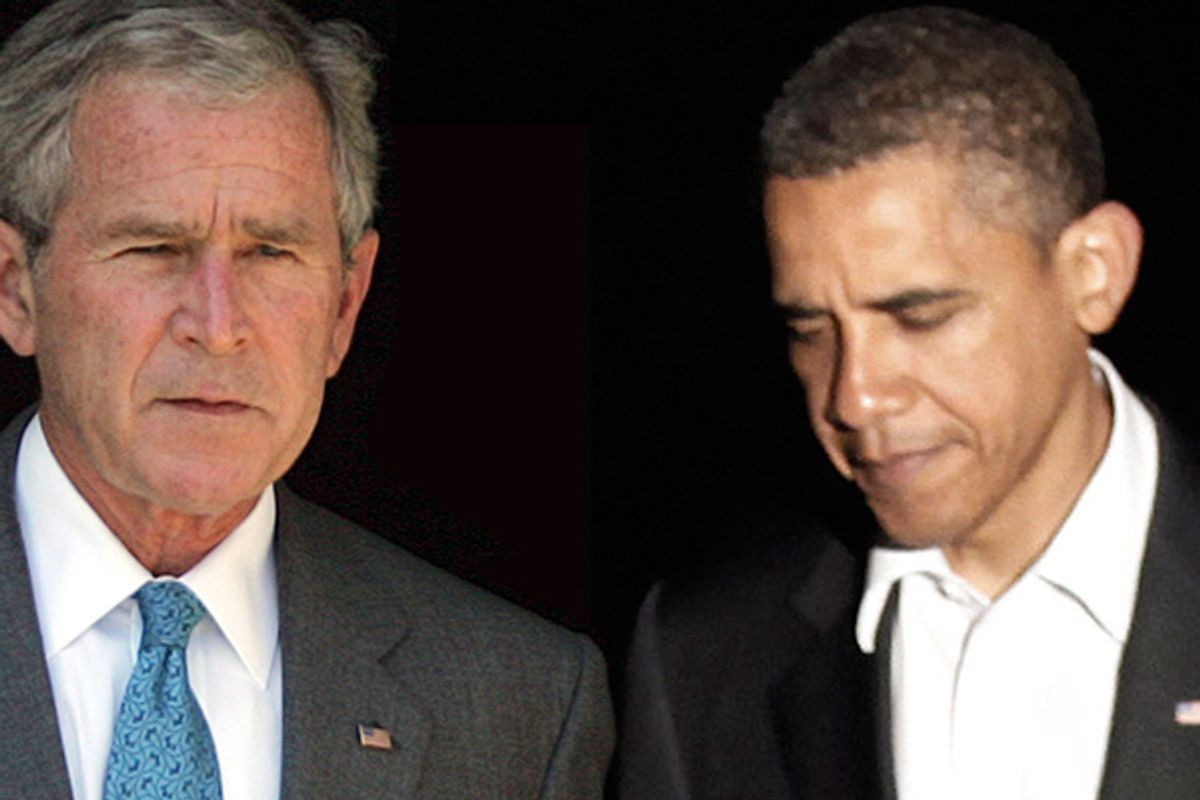 Scott Lemieux hauls out the presidency-is-weak excuse to explain away some of Obama's failures; I've addressed that theory many times at length before and won't repeat those points here, but this bit of historical revisionism, made in service of that excuse-making, merits a response:

I've asked this before, but since I've never received a decent answer let me ask again: for people who believe in the Green Lantern theory of domestic presidential power, how do you explain the near-total lack of major legislation passed during George W. Bush's second term, including a failure to even get a congressional vote on his signature initiative to privatize Social Security? He didn’t give enough speeches? He wasn’t ruthless enough? Help me out here.

Lemieux's strangely selective focus on Bush's second rather than first term is worth a brief comment.  After all, the current President in question is in his first term, which would seem to make that period (when Bush dictated to a submissive Congress at will, including when Democrats controlled the Senate) the better point of comparison; moreover, by his second term, Bush was plagued by a deeply unpopular war, fatigue over his voice after so many years, and collapsed approval ratings, which explains his weakness relative to his first term.  None of that has been true of Obama over the last two years.  And Bush never enjoyed Congressional majorities as large as Obama had for his first two years.

But more to the point, to claim that there was a "near-total lack of major legislation passed during George W. Bush's second term" means Lemieux has either forgotten about numerous events during that period or has a very narrow definition of the word "major."  There was, for instance, this: 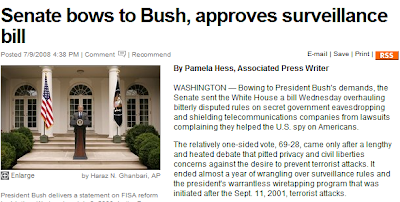 That bill -- passed with substantial Democratic support -- basically legalized Bush's previously illegal warrantless domestic spying program and bestowed retroactive immunity on the entire telecom industry, which seems pretty "major" to me.  So does this: 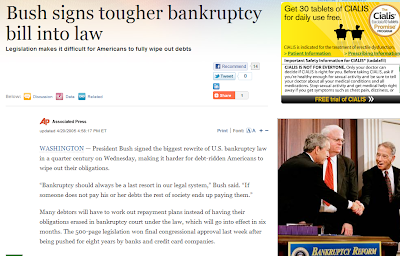 That bill, a huge boon to the credit card industry, strangled the ability of ordinary Americans to work their way out of debt, which also strikes me as quite "major."  Then there's this: 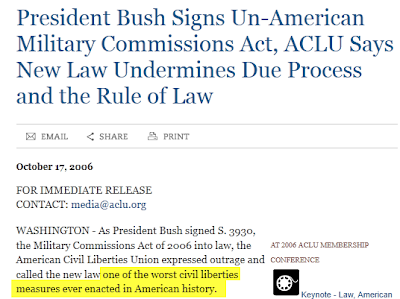 That's referring to the Military Commissions Act, enacted upon the demands of the Bush administration with substantial Democratic support; I trust I don't need to explain how "major" that was.  There was also this: 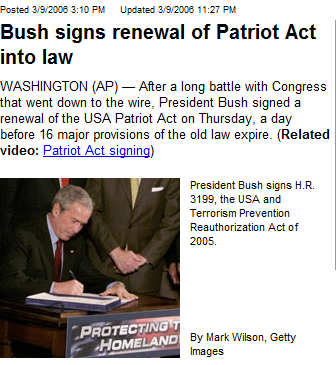 Democrats babbled about the evils of the Patriot Act for years and then meekly submitted to Bush's demands that its key and most controversial provisions be renewed; that also seems "major."  Just as significant was the legislation Bush prevented the Congress from passing, even when both houses were controlled by Democrats, such as this:

Given that the Democrats in the 2006 midterm election convinced the American people to hand them control of the Senate and House by promising to end the deeply unpopular war in Iraq, Bush's repeated success in blocking any such efforts -- accomplished by things such as steadfast, serious veto threats -- strikes me as a very "major" victory.

Granted, Bush's success on Iraq falls into the foreign rather than domestic realm, and some of the other examples are hybrids (Patriot Act and domestic spying), but they illustrate the real power Presidents can exert over Congress.  Moreover, this presidency-is-weak excuse is often invoked to justify Obama's failures in all contexts beyond purely domestic policy (e.g., closing Guantanamo and the war in Libya).  And all this is to say nothing of the panoply of domestic legislation -- including Bush tax cuts, No Child Left Behind, and the Medicare D prescription drug entitlement -- that Bush pushed through Congress in his first term, or his virtually unrestrained ability to force Congress to confirm even his most controversial nominees, including when Democrats were in control of Congress.

That doesn't seem too weak or ineffectual to me: quite the opposite.  In fact, so dominant was the Bush White House over Congress that Dan Froomkin, in 2007 -- when Democrats controlled both houses -- memorably observed: "Historians looking back on the Bush presidency may well wonder if Congress actually existed."  In sum, nobody -- and I mean nobody -- was talking about how weak the presidency supposedly is before Barack Obama was inaugurated: neither in the domestic nor foreign policy realm.  To the contrary, just a few years ago, the power of the Presidency was typically conceived of as far too robust, not too limited.

It is true, as Lemieux suggests, that Bush suffered some legislative defeats in his second term (three in particular), but even those defeats highlight critical points about Obama.  Two of those defeats -- failure of immigration reform and the forced withdrawal of the Harriet Miers Supreme Court nomination -- happened not because a powerful Congress overrode him, but rather because his own right-wing base rose up and refused to accept those proposals on the ground that they so violently conflicted with their political values: imagine that!  The other defeat -- Social Security privatization -- was a real defeat because that's a very difficult goal to achieve in American politics (The Third Rail), but Bush did everything possible to succeed (including frenzily touring the country for months with speeches making his case), which is how one knew that he really wanted that to happen.  That's what Presidents do when they're genuinely committed to a goal rather than pretending to be.

In that regard, Lemieux, ironically, claims to be burning down a strawman even as he props up his own: a very common one among those making this weak-presidency excuse.  Nobody -- and I mean nobody -- argues that Obama can impose without constraints whatever policy outcomes he wants (what Lemieux and many others deride as the "Green Lantern Theory").  That viewpoint is a non-existent caricature.  Of course it's the case that Presidents sometimes fail even when they use all the weapons in their arsenal (as Bush did with Social Security privatization).

The critique of Obama isn't that he tries but fails to achieve certain progressive outcomes and his omnipotence should ensure success.  Nobody believes he's omnipotent.  The critique is that he doesn't try, doesn't use the weapons at his disposal: the ones he wields when he actually cares about something (such as the ones he uses to ensure ongoing war funding -- or, even more convincing, see the first indented paragraph here).  That evidence leads to the rational conclusion that he is not actually committed to (or, worse, outright opposes) many of the outcomes which progressive pundits assume he desires.

That's why Paul Krugman has been pointing out over and over that Obama wasn't helplessly forced into an austerity mindset by an intransigent Congress but actually believes in it, that he wants severe cuts.  Identically, the evidence is now overwhelming that the public option was excluded from the health care bill because Obama wanted that outcome and thus secretly negotiated it away with the insurance industry, not because Congress or the 60-vote requirement prevented it.  Similarly, while Congress did enact legislation preventing the closing of Guantanamo, Obama never wanted to shut it down in any meaningful way, but simply move it (and its defining abuse: indefinite detention) a few thousand miles North to Illinois.

The criticism isn't that Obama tried but failed to stave off austerity policies, a public-option-free entrenchment of the private health insurance industry, the preservation of indefinite detention or similar "centrist"/right/corporatist policies; it's that his lack of fight against them (or his affirmative fight for them) shows he craves those outcomes (just as nobody forced him to continue the vast bulk of the Bush/Cheney Terrorism approach he (and most Democrats) once so vehemently denounced).  And whatever else is true, claiming that George Bush was similarly "weak" in the face of Congress is revisionist in the extreme.

One last point: Lemieux's very literalist criticism of Vast Left's cartoon isn't exactly wrong -- it's a two-line cartoon that relies on caricature -- but its central point is accurate: there is a serious, obvious tension between, on the one hand, saying things like this to explain away Obama's failures, and then turning around and announcing that his re-election must be the overarching, supreme priority that outweighs and subordinates all other political concerns, both short- and long-term.

UPDATE: Elissar008 reminds me in comments that I neglected to include this:

Bailing out Wall Street with $700 billion seems to be yet another "major" legislative accomplishment no matter how one might define that term.


UPDATE II: In comments, dgt004 notes another irony: "Bush's major failure during his second term was the inability to gut social security. However, Obama appears to be on the verge of doing so successfully."  If that happens -- and it is a prime purpose of the Super Committee, since those eager to cut Social Security have long said it can happen only with a bipartisan, fast-tracked Commission -- we will undoubtedly hear the same claim: that a helpless Obama was tragically forced into accepting it by Congress.  That Obama has said over and over -- in public -- that he desires and is fighting for exactly this outcome will not deter the proffering of that "weakness" excuse.  It is strange indeed -- and revealing -- that some Obama supporters think the best way to defend him is by constantly emphasizing his weakness.


UPDATE III:  Highly recommended:  Yale Professor David Bromwich examines the "impressive continuities" of what he calls the "Bush-Obama presidency."  It's a very thorough list: consider how much of it can be fairly blamed on Congress.