"Have you ever had sex with Rick Perry?" 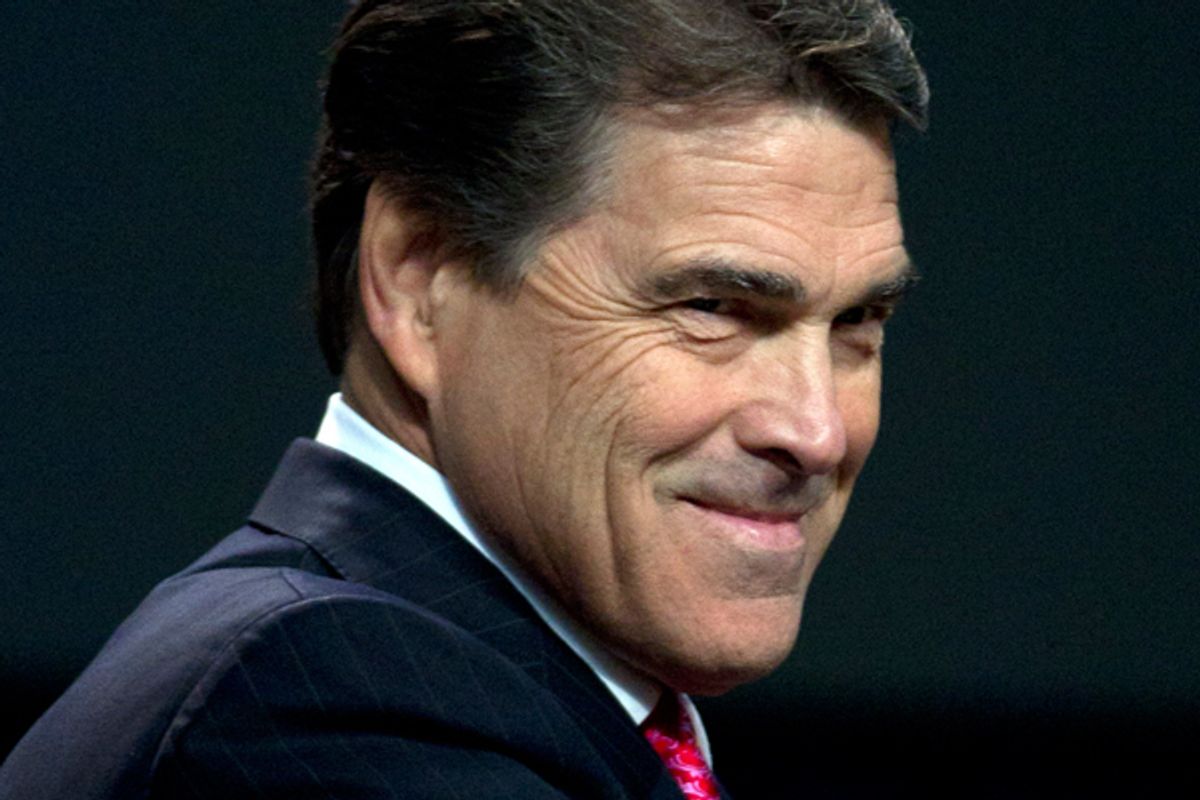 An Austin Ron Paul supporter has taken out a full-page ad in the local alt weekly newspaper seeking any "stripper ... escort ... or 'young hottie'" who has slept with Rick Perry, part of his single-minded jihad against the presidential candidate.

Robert Morrow describes himself as a "self-employed investor and political activist" as well as a three-time delegate to the Texas state GOP convention.

"Have you ever had sex with Rick Perry?" blares the ad, placed by Morrow in this week's Austin Chronicle. "Are you a stripper, an escort, or just a 'young hottie' impressed by an arrogant, entitled governor of Texas? Contact CASH, and we will help you publicize your direct dealings with a Christian-buzzwords-spouting, 'family values' hypocrite and fraud."

CASH is the Committee Against Sexual Hypocrisy, of which Morrow is president. "Is it a real group? No. It's just me," he told Salon earlier this week. Here is the ad, which the paper confirmed is running today (click for full size): To be clear, there is absolutely no evidence that Perry has had extramarital affairs. But Morrow has written a screed, currently circulating online, that denounces Perry both for his policies (it labels him a "crony capitalist" and a "Neocon") as well as his alleged dalliances.

Morrow claims that he knows strippers in Austin who have stories about Perry, but none of them are willing to come forward to the press; hence, the need for an ad in the Chronicle. "I think it's only a matter of time until somebody credible comes forward," he told me.

At the bottom of the ad is a nod to the longtime (and equally unsubstantiated) rumors that Perry, who has pursued sundry anti-gay policies, is himself gay. "Note to gay people: If you know the truth about Rick, please QUIT covering for him," it reads.

The Chronicle itself looked into the infidelity/gay rumors in 2004, calling them "extraordinary in their baroque detail and remarkable persistence." It found "no evidence of any truth to any of them, whatsoever." Just this past June, Politico reported that Perry's organization was "more than prepared" for a re-airing of the gay rumors. His spokesman said that Perry and his wife, Anita, "have been lovingly married since 1982 and are parents to two grown children."

Morrow, meanwhile, has been leaving comments on blogs, writing his widely circulated anti-Perry essay, and, he says, fielding calls from multiple reporters. (He even says he spoke with a National Enquirer reporter who is being dispatched to Austin.)

This isn't the first time Morrow has engaged in this sort of one-man attack campaign. Back in 2008, he paid for (and personally voiced) an anti-Hillary robocall in South Carolina that made the unsubstantiated claim that "Hillary knew about and helped cover up Bill's rape of Juanita Broaddrick."