"Tiny Confessions": What your animal is really thinking about you

Slide show: A healthy dose of shame from your pet, courtesy of comedian Christopher Rozzi 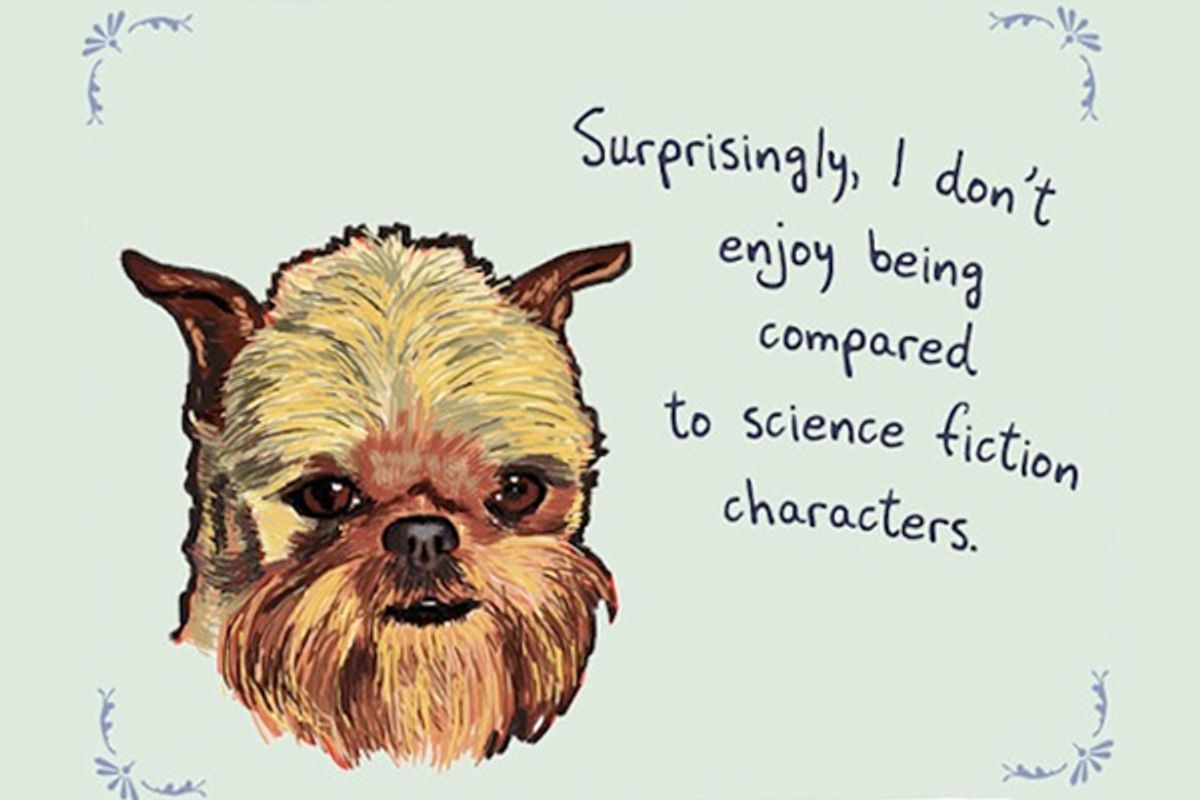 I have to admit, I'm obsessed with the idea of anonymous confessionals. PostSecret.com  was my jam in college: a blog where people would send in anonymous postcards (not e-cards, but those kinds that required stamps) admitting to some dark and grievous sin that they felt they need to atone for. OK, a lot of it was just emo whining, but PostSecret became a big enough success to warrant its own book.

Christopher Rozzi has taken the idea of those secret confessionals one step further. On his Etsy site, Tiny Confessions, he sells drawings of the world's most adorable pets airing the same sort of self-doubts that led you to buy a cute little Shih Tzu in the first place. If you're the kind of person who feels like your cat is secretly judging you, then Rozzi's work is right up your alley. I posed five questions to the New York-based comedian in the hopes of alleviating my fears that deep down, my dog doesn't love me as much as he seems to.

1. What's your profession, and how old are you? Where are you located? (The basics.)

I am a writer, comedian and artist living and working in New York City. I have performed my one-man comedy, "Outré Island," in different venues around the city, where I portray many unusual characters in a lost civilization. I also do commissioned paintings and graphic design.

My wife and I adopted our dog, Willie, about a year ago. Being a comedian, I naturally began imagining his thoughts and dreams as we walked around. As I had been trying to figure out a way to combine my comedy writing with my art, this seemed to work perfectly together. I was really just trying to amuse myself and hope that others would follow along.

3. A lot of these themes have to revolve around guilt complexes ... but I'm not sure if I'm supposed to feel sorry for these animals, or if these animals are feeling sorry for me.

For some reason I have always found guilty secrets to be funny. There’s a Woody Allen movie where he steals a woman’s purse, only to find that it contains chains and other crazy things. I like the idea that everyone has some hidden weirdness or eccentricity. That seems to be what my comedy is always about. For the most part, though, I try to keep them fairly positive and light. I don’t think anyone wants a print of a cat that says, "I once killed a man in Texas."

4. What was your very first (or favorite?) Tiny Confession?

The first one was a Yorkshire terrier thinking, "I have no concept of how small I am." My poofy little bichon sometimes tries to get into it with Rottweilers and pit bulls. I also thought it was an inspiring message for shorter people like me and my wife. My favorite Tiny Confession is one that I can’t release just yet because of copyright infringement. It’s an image of Darth Vader thinking, "I was hoping that the other guy was my son." Maybe one day Tiny Confessions will be so big that George Lucas will want to combine our empires together. Until then I’m trying to stay out of jail.

5. You've done mostly animals, but have branched out to several human figures as well as a fortune cookie. Any plans on future Tiny Confessions?

Yes, I am constantly coming up with new subjects for these. So far I have done one "historical" figure in William Shakespeare. The silly thing about it is it's really just me dressed as William Shakespeare. So I plan on doing a whole series of historical figures, but with me in costume. Again, trying to amuse myself.