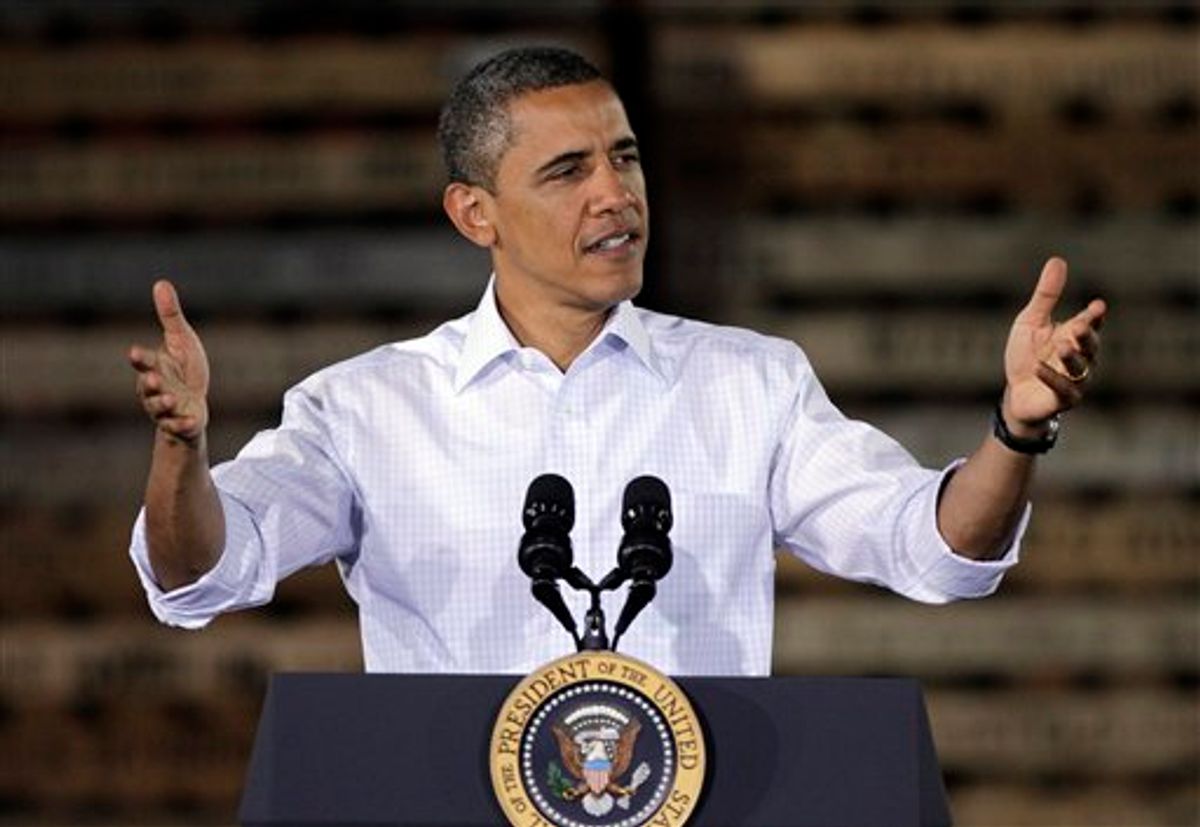 Under fire in a nation desperate for jobs, President Barack Obama will soon announce a broad package of tax cuts, construction work and help for the millions of Americans who have been unemployed for months, a White House official said Wednesday. Republicans immediately cast doubt about any such plan, setting up a fresh economic showdown as the presidential campaign intensifies.

Obama will unveil his economic strategy in a speech right after Labor Day, hoping to frame the autumn jobs debate by pressuring Republicans in Congress to act or face the voters' wrath. The country is in a deep state of disgust about Washington politics, piling urgency on both parties to help the economy quickly -- or somehow position the other side to take the blame.

To pay for his jobs ideas, Obama will challenge the new "super committee" in Congress to go well beyond its goal of finding $1.5 trillion in deficit reduction, with part of the savings used to cover some of his economy-jolting help without sinking the nation deeper in debt. But there, too, Obama already faces trouble from Republican members who have ruled out tax hikes.

It's all leading to a sharp campaign for public opinion, the outcome shaping the presidential and congressional elections in 2012.

Obama, as the most visible target for voter ire, is seeking re-election with unemployment north of 9 percent. No incumbent in recent times has won a second term with the jobless rate anywhere near that high.

The final details of Obama's new economic plan have not been decided, and it is expected to be broader than the proposals known so far.

It is likely to include tax cuts to help the middle class, a build-up-America construction program that goes beyond any infrastructure proposal Obama has had already, and targeted help for the particularly worrisome group of people who have remained unemployed for many months in a row.

A White House official confirmed those details to The Associated Press, on condition of anonymity because the president has not disclosed them publicly.

In Illinois on Wednesday, Obama broadly outlined his plans to help the fragile economy and have the costs covered as part of a broad plan to reduce the deficit. He pledged to present a specific way to do both to the super committee of lawmakers assigned to come up with such a deficit-slicing plan before Thanksgiving.

Previewing his line of argument, Obama has spent much of a three-day bus tour through the Midwest lobbying people to pressure their members of Congress to deal with him.

"If you're delivering that message, it's a lot stronger than me delivering that message because you're the folks ultimately that put those members of Congress into office. All right?" Obama said at a town hall in northwest Illinois. He faced a supportive but restless audience eager for its government to deliver on jobs, aid for the needy and protection of Social Security.

Republicans were underwhelmed by news of another speech, jobs package and deficit plan from the president.

On the campaign trail, Republican presidential front-runner Mitt Romney needled Obama. "Too little, too late," he said from the key primary state of New Hampshire. "But we appreciate the fact that he's going to devote some time to it -- not just going to be on the bus tour, not just going to be vacationing in Martha's Vineyard."

From Congress, Republican House Speaker John Boehner said the Democrats are the ones who have sat on GOP jobs bills in the Senate. Boehner said the burden was on Obama to offer the country fresh proposals "that depart from his previous policies and allow us to find common ground."

And from the liberal flank of Obama's own party, the advocacy group MoveOn.org asked its members to phone the White House and keep pressure on him not to "placate" Republicans who are being pressed in turn by the tea party. "He needs to start listening to the vast majority of the American people who say job creation is the number one priority, and the rich and corporations should be taxed more, not less," the group's email said.

Obama, too, wants to tax the wealthy more as one way to cut the deficit. But up against a potentially catastrophic government default, he settled for a deal with Congress this month that trimmed the debt without any new revenues, just spending cuts.

Obama is trying again by working to influence the new debt committee in Congress.

"You've got to have everything on the table," Obama said Wednesday, meaning taxes and popular health programs. He has little say over whether Congress goes that route.

Nearly 14 million people are out of work, and that doesn't count the millions more who have given up trying to find jobs or who have part-time employment when they want full-time.

The president will propose specific help for the long-term unemployed. Roughly 6.2 million people fit that description, meaning they have been out of work for 6 months or more.

Federal Reserve Chairman Ben Bernanke and many private economists have cited the rise in long-term unemployment as a particularly ominous result of the deep recession and the weak recovery. Their fear is that even as the economy recovers, those who've been out of work that long may never rejoin the work force, relying instead on government help.

The administration official emphasized that Obama's proposals would be fresh ones, not a rehash of plans he has pitched for many weeks. Yet he will keep pushing those other ones, too, including three pending trade deals, patent-law changes and an extension of a payroll tax cut for employers.