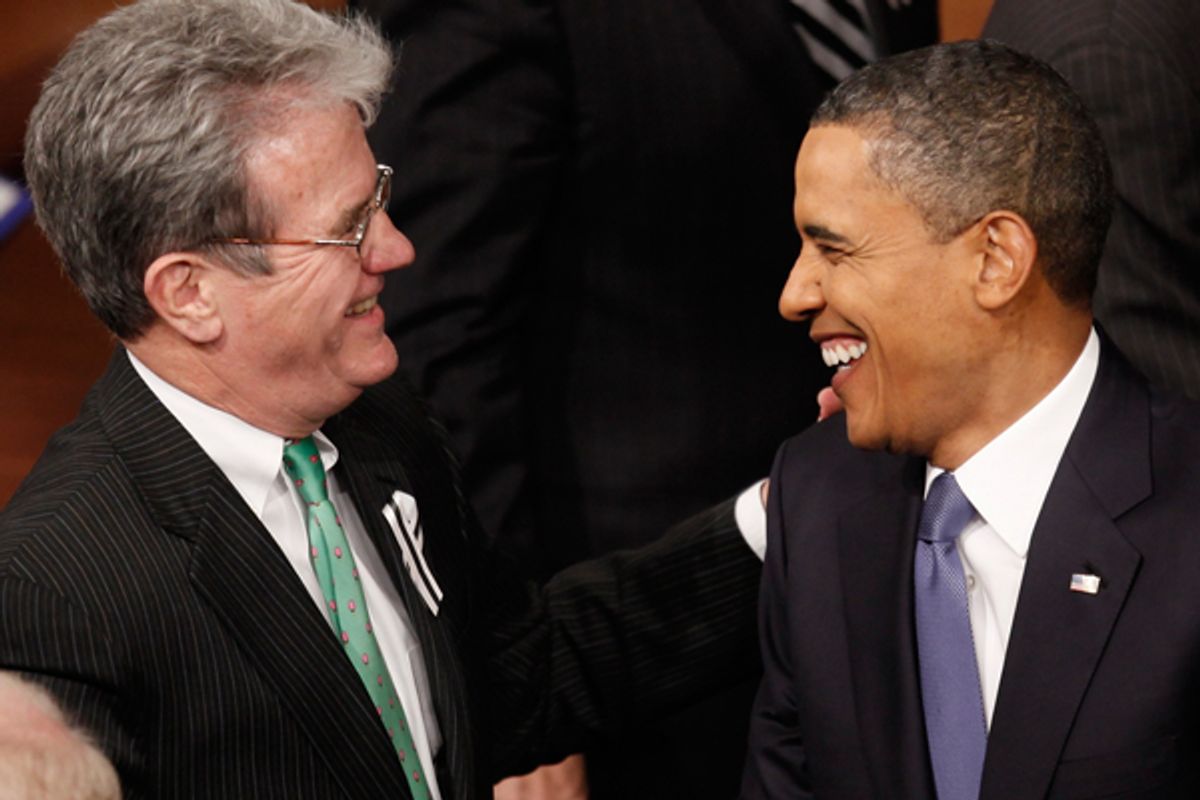 Far-right deficit hawk Sen. Tom Coburn occasionally flirts with decency and challenges GOP obstinacy, most recently when he floated a deficit-reduction plan that raised $1 trillion in revenues by closing "tax expenditures" and cut another trillion from defense. Of course Coburn wanted to slash Medicare and Medicaid and raise the eligibility age for Social Security, so he wasn't abandoning his party completely.

In his latest attempt to appear to be a decent guy, the Tulsa World reports, he defended the president from a constituent who asked if Obama "wants to destroy America." To do so, Coburn indulged in creepy racial stereotyping to explain the president's politics. Obama's "intent is not to destroy," Coburn assured his audience. "His intent is to create dependency because it worked so well for him," he said. The president backs welfare programs, the Oklahoma senator explained, because "as an African-American male," he received "tremendous advantage from a lot of these programs." He didn't exactly call Obama a "welfare queen," I guess, but it's not too far off.

Coburn didn't enumerate exactly what programs the president had relied on as an African-American male. We know that Obama's white mother relied on food stamps briefly when he was a toddler. Is that what the senator is referring to? The vast majority of food stamp recipients, of course, are and always have been white, like Ann Dunham. Maybe the Obamas took the home-mortgage deduction when they bought their Chicago home? That's a government subsidy that creates dependency, disproportionately among wealthy white people and the real estate and banking industries. Maybe it's the student loan system? We know the president and Michelle Obama just finished paying off their student loans, in their 40s. I think Coburn needs to come out and explain the programs that benefited Obama "as an African-American male" so we understand what he's saying about the president.

The Plum Line's Greg Sargent got a copy of the Tulsa World transcript of Coburn's full remarks, and Sargent, an always generous person, thinks they might exonerate Coburn from the worst interpretation of his remarks. I think the full remarks are a little bit more awful, because it's clear the Oklahoma doctor can't see Obama for who he is: a bright, successful middle-class black man who grew up in an economically stable extended family, not a poor black kid from a welfare-plagued ghetto. Right-wing Christian racial condescension drips from Coburn's supposedly sympathetic depiction of the president:

"He's a very bright man. But think about his life. And think about what he was exposed to and what he saw in America. He's only relating what his experience in life was ...

"His intent isn't to destroy. It's to create dependency because it worked so well for him. I don't say that critically. Look at people for what they are. Don't assume ulterior motives. I don't think he doesn't love our country. I think he does.

"As an African American male, coming through the progress of everything he experienced, he got tremendous benefit through a lot of these programs. So he believes in them. I just don't believe they work overall and in the long run they don't help our country. But he doesn't know that because his life experience is something different. So it's very important not to get mad at the man. And I understand, his philosophy -- there's nothing wrong with his philosophy other than it's goofy and wrong [laughter] -- but that doesn't make him a bad person."

The craziest thing is that Coburn is supposed to be one of the president's few "friends" on the other side of the aisle. Obama has repeatedly touted his "unlikely friendship" with Coburn, calling him his friend and his "brother in Christ" at this year's "National Prayer Breakfast." He's a member of the deficit-hawk "Gang of Six" much praised by the president. Coburn has called Obama a "wonderful man." And even in his racially bizarre comments, Coburn called Obama "very bright," despite his "goofy and wrong" political philosophy. In other remarks at home, he defended both Obama and Fed Chairman Ben Bernanke from Rick Perry's crazed attacks, arguing that the real problem is Congress. "It's just a good thing I can't pack a gun on the Senate floor." Of course, in a way, he's just out-Perrying Perry. (Are they still allowed to pack canes on the Senate floor?) And he even channeled Nevada Senate candidate "Chicken" Sue Lowden, insisting seniors were better off before Medicare, when doctors who treated folks who couldn't afford medical care "accepted baked goods or chickens in partial payment."

Coburn is right about one thing. Our president does have a dependency problem. He's overly dependent on the nonexistent goodwill of Republicans who are out to destroy not only his presidency, but the entire system of social opportunity built by the Democratic Party, belatedly and briefly supported by Republicans like Dwight Eisenhower and Richard Nixon, over the last 80 years. Obama's dependency on the notion that he's the lone man who can reason with implacable enemies and lure them to compromise is deeply debilitating, for him and for his party.

The Coburn craziness reminds me of when the president pinned his hopes for a bipartisan healthcare reform bill on Iowa GOP Sen. Charles Grassley -- and Grassley repaid his trust by backing Sarah Palin's "death panels" lie, telling constituents Obamacare would "pull the plug on Grandma." I hope Coburn's crude racial stereotyping can jolt the president from his dependency on respect from Republicans, because he'll never get that respect. That his so-called friend thought he was defending Obama with his racially blinkered theory is sad, for the president and for the country.