The one way Michele Bachmann could actually help the GOP

Nominating Michele Bachmann would be political suicide for Republicans, but they need her to stick around for now 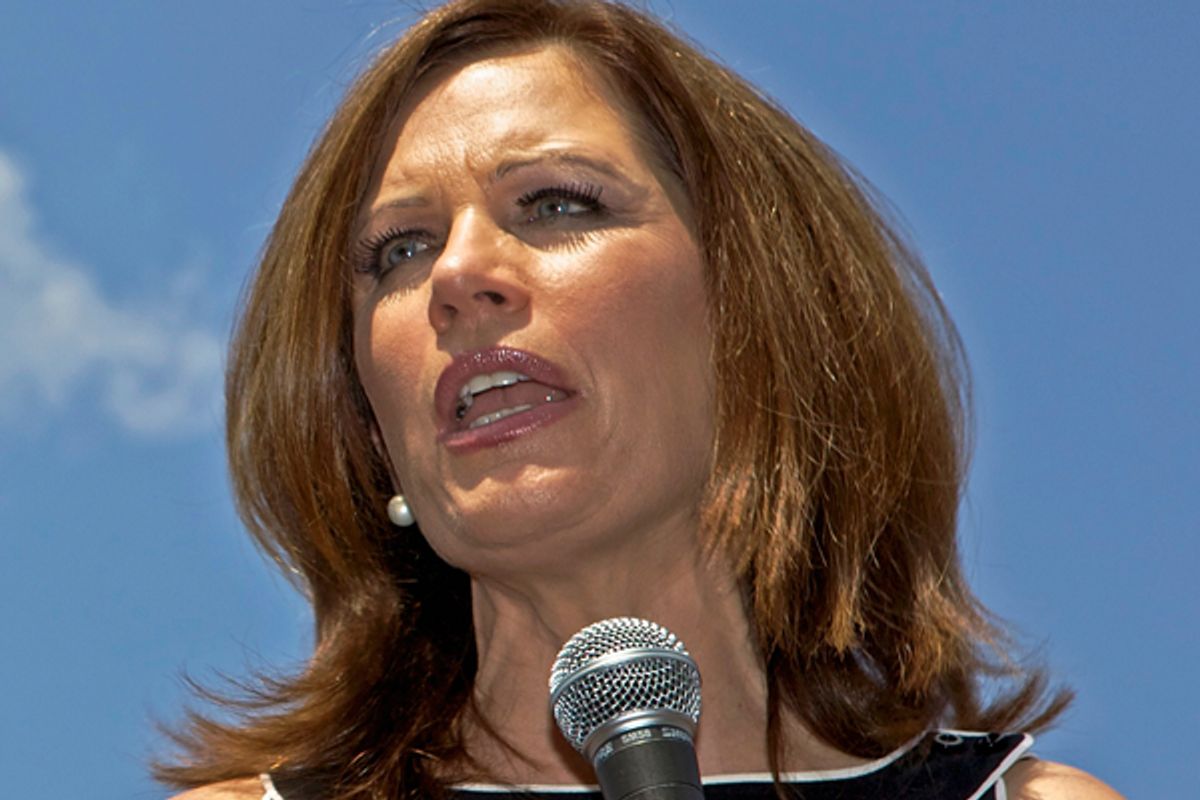 The ways in which Michele Bachmann's presidential candidacy could prove harmful -- maybe even ruinous -- to her party are easy to imagine.

There's the remote, but not entirely implausible, scenario in which she scores a momentum-generating win in Iowa, catches a few breaks, and walks off with the GOP nomination, only to terrify swing voters in the fall and cost her party an utterly winnable election. And there's the less dramatic, but equally unnerving for the GOP, scenario in which she fails to win the nomination but succeeds in hijacking the political conversation and pushing her opponents even farther to the right, making the Republican Party's already serious image problem even worse and creating an opening for Obama to win reelection by running against the GOP label.

In other words, Republicans are playing with fire whenever they offer Bachmann encouragement, which probably explains why the Wall Street Journal -- which had previously been happy to help Bachmann build her brand -- turned its guns on her this week.

But the GOP's opinion leaders might not want to go after her too aggressively, at least not yet, because the events of this week have created the possibility that they'll need her to be a strong candidate in the primaries in order to prevent a different disaster.

This is a result of Rick Perry's rambunctious entry into the race. The Texas governor, as we've been noting, was supposed to be a consensus candidate -- one the party's restive base would like and that November-minded elites would be comfortable with. But his performance since last Saturday has not struck that balance at all. With his overheated antics, he's catered to the GOP base and its passions while arousing fears from elites who now wonder if he'd be any stronger than Bachmann as a general election candidate.

This is where Bachmann comes in. Her ability to channel the base's irrational, swing voter-alienating passions may make her a near-certain November loser, but it also positions her to corral many of the voters Perry is now pursuing. For GOP elites who now have reservations about Perry, this is a very helpful dynamic.

At the very least, it buys them time right now, preventing Perry's campaign from becoming a runaway train while they decide what they really make of him and his general election prospects. And if they do ultimately decide that he'd be a bad November bet, then Bachmann could potentially do them a big favor by winning Iowa, a state where Perry will be expected to do well. If he can't beat Bachmann there, his stature would be reduced, and the next contest probably wouldn't go much better for him: New Hampshire Republicans have long been resistant to overtly religious Southerners. Yes, the race then would head South to Perry's natural turf -- but with Bachmann winning Iowa, she'd almost surely prevent Perry from sweeping through the South, just as he'd eat into her support. The big winner in a scenario like this would be Mitt Romney, who is probably the safest (read: most generic) candidate Republicans could nominate.

Like I said, with Bachmann Republicans are playing with fire. If she were to manage an Iowa victory, the remote chance that she'd end up the nominee would become a little less remote. And having her in the spotlight for the early months of 2012 obviously won't help the party's image. But as long as Republicans are genuinely concerned about Perry's electability, they're probably better off having Bachmann around.