When my cat finally took to the leash

Salon readers urged me to give it another try. And after a world of changes, I did 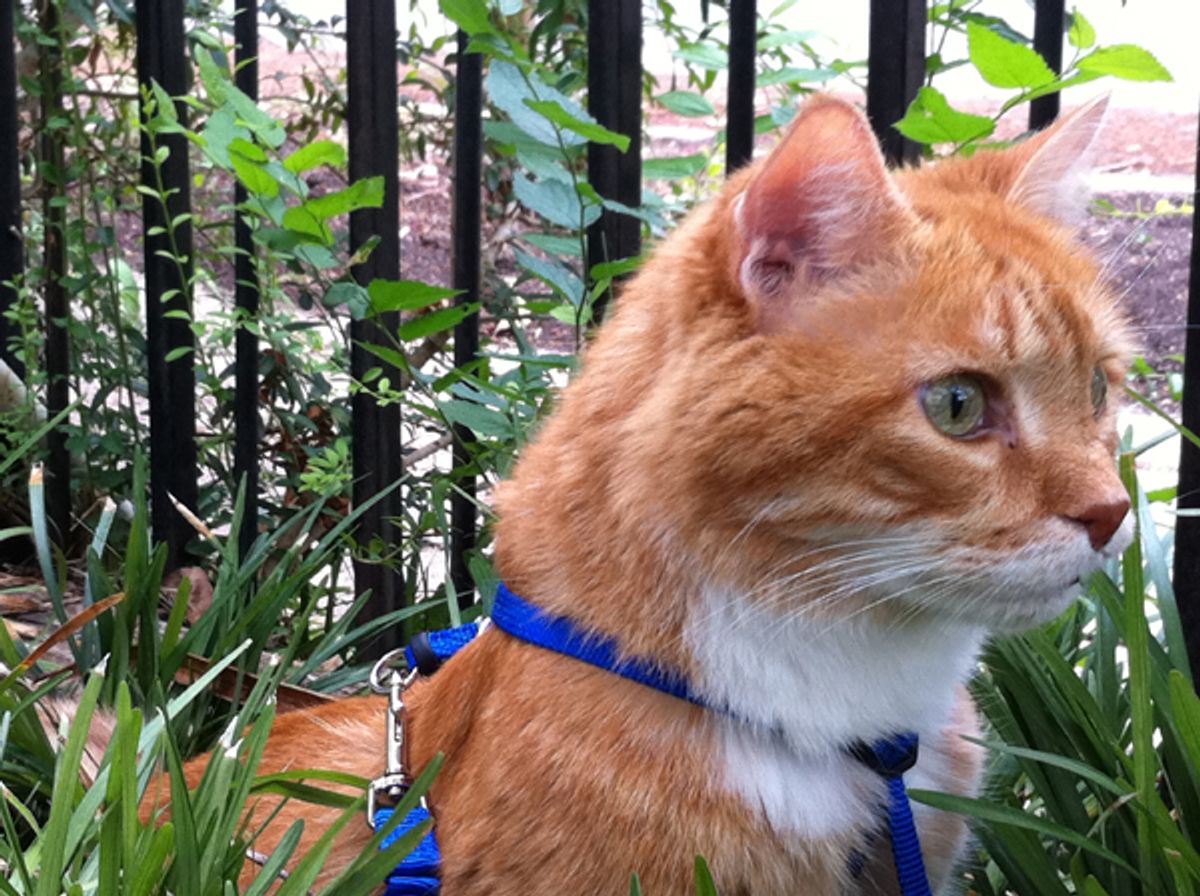 The night I discovered my cat could walk on a leash did not begin well. I was sitting on the couch, toiling away on some dorky craft project, when Bubba set himself down at the front door and began to meow.

"Ugh, cut it out," I said, because everyone knows: That helps.

Only weeks ago, we moved from a 200-square-foot studio in Manhattan to a roomy cottage in Dallas, which was a little bit like waking up one morning and discovering your black-and-white movie had gone Technicolor. This place is a find. It has two stories, a huge open kitchen, and windows that look out onto leafy, sun-dappled trees where birds flutter about. As far as I could tell, this is Cat Paradise.

And while I didn't exactly expect a Martha Stewart thank you card, my mood quickly soured when he didn't appreciate it. I'd already done so much for him: toys littered the floor, unused; a scratching post had become a tacky mail holder. Now, the cat stood at the front door, firm and ever-striving, demanding access to the one place I would not allow him to go.

"You're not going outside," I said.

"The dogs next door will eat you," I said.

I took a deep breath, and tried to focus on my latch hook rug. I don't know how long you can successfully block out a cat's insistent whining -- or a dog's bark, or a baby's screams -- but I have found I can maintain an admirable Zen-like calm for about 10 minutes. After that, I pretty much want to rip out someone's heart.

"If you meow one more time, I'm going to totally lose it, I swear!" I finally said.

Which was such a setup, right? Because, come on: That cat knows one sound. There was zero chance he was going to veer off-script at this point. Bubba looked at the door, looked at me, blinked his gorgeous green peepers, and said: Mrroooww.

That was it. I jumped off the couch and dug through the junk drawer till I found it, stored in the funny plastic packaging in which it had arrived a year ago: "Come with me kitty," it read, next to a picture of a proud tabby walking in his harness, tail aloft. I cracked it open and unfurled the blue nylon like I was holding our nation's flag.

Last July, I wrote a story for Salon about my failed attempt to leash-train my cat. At the time, Bubba had grown cranky in our cramped quarters, and I felt the bone-deep frustration of someone woken up every morning at 5 a.m. by a tiny paw in her face. Everyone I asked about my endeavor -- literally, everyone -- warned me that it would not work. Cats don't take to leashes, particularly at the robust age of 13, but to me it seemed like an elegant solution to the great dilemma of my cat's life. He would die if he went outside. And he would die if he didn't.

I know some cats are content to skitter about in the comfy confines of a house or apartment, never even bothering with the Great Beyond. But not my guy -- he had tasted blood. Years ago, he was an outdoor cat in Dallas who returned at dawn with bloody teeth marks in his cheeks and feathers in his claws, and let me tell you, it has been hell to walk that back. I know he wouldn't have survived this long if he hadn't become an indoor cat -- particularly in New York, where it was the only option -- but there is part of me that will always feel I ripped Bubba away from his true calling just so he could cuddle with me on cold nights.

The leash was a non-starter. Once I coaxed him into the harness, he nailed himself to the floor. When I carried him down the stairs to our courtyard, he whined to go back inside. Cats are stubborn. Trying to force them to enjoy something is like trying to make a goth teenager line-dance at a wedding. And so I tossed the leash in the junk pile, a quirky keepsake from a fizzled experiment, the latest in the funny-sad adventures of pet owners who love too much.

Six months later, Bubba got sick. There were weeks of vomiting, one dramatic trip to the E.R., and a ghastly night in which he spit up white foam and I tried, with shaking hands, to insert a baby enema in the swollen blossom of his rear. He stopped eating. There were tests, and pills twice a day, and dozens of baffling late-night searches on the fear factory that is the Internet. Eventually Bubba got diagnosed with a chronic illness -- irritable bowel disease, or IBD. The incessant 5 a.m. meows from July now seemed less like a cat who craved more square footage and more like the first distress signals of a body winding down.

No one knew exactly how long he had. "He could die next month. He could die in a year," I cried to my mother one afternoon.

"So you have to be grateful for today," my mother said. She is very sane and grounded. It can be deeply irritating at times.

But of course she was right. What else can you do? After we moved back to Dallas, the pills did their job, and he got better, stronger. He regained his appetite, and put back some of the weight. Still, I suspected the outdoors would call to him, and I wasn't sure what to do about that. Our neighbor (and landlord) keeps rescue dogs, three barky bruisers, on the other side of the fence, and I was sternly warned not to let the cat roam free. But the space we had to ourselves was generous: A tidy little lawn, a narrow walkway that leads to a big gravel driveway. It is perfect for sauntering back and forth. It is perfect, quite frankly, for a cat on a leash.

That night, when I grabbed for the package, I did not think the leash was going to work. No way. I was doing that thing where you try to prove your own point by demonstrating the hopelessness of the other side. See how miserable it is on your leash? See, see? But I'd be lying if I didn't admit I'd retained some hope. I had held on to that leash, after all, even after shedding most of my belongings in New York.

After my Salon story, a few readers emailed to tell me I should keep trying. "He'll get used to it," they said. "Don't give up." And those words were dancing around my head as I fastened the harness around his white scuff. He let out a frustrated little yelp.

"You're trying to exhaust me so I won't miss you when you're gone," I told him. And then, I opened the door.

I expected him to hunker down and refuse to budge. Instead, it was like he had been electrified. He wasn't spazzy and frantic, just alert, as though his ears were a tuning fork that had just divined the sounds of the entire universe. He padded through the grass and gummed blades of grass. He rolled around in a pile of dirt. He scratched an old log with his claws. He sniffed everything: the license plate on my car, an old ceramic pot. He sniffed the air like a cartoon animal standing underneath a pie that has just been set on the window sill -- his snout pulsating madly, his whole body arcing upward.

He explored all corners of our little universe that night. A crawl space behind a tree. A patch of scrub in the driveway where bugs hide. The cool feel of the gravel on his belly. I was delighted that he didn't seem to mind being tethered to me. He never tried to break free or wriggle his way out of the harness. A few times the leash got caught on some inconvenient bush, and he waited, patiently, until I untangled it.

I don't know what changed, why the experiment worked this time. Maybe it's the fact that I live on a quiet side street, with less bustling background noise than in the courtyard where we once tried this in New York. Maybe it's that the smells and sounds outside the door finally matched the ones imprinted on his memories from so long ago. Maybe it's just that failure is often the beginning of a success story.

In the weeks since then, we have gone out every day. He knows exactly when the dogs next door are inside, and he announces it with his mewling presence at the front door. Sometimes, he walks out, looks around, and comes right back in. Sometimes, he just lies in the grass while I read the paper. Sometimes, he'll be in the middle of a mission, and a sound will startle him, and he'll bolt so fast that I have to sprint to keep up with him, only I can't move that fast in flip-flops holding a cup of coffee, so he thrashes about on the leash like a caught fish at the end of a line. It's hilarious and horrible. (The leash is a marvel of gentle but sturdy engineering; it is designed for these panics and does not choke or hurt him.) I have new anxieties now: He will scramble up a tree before I catch him; he will somehow make his way into the dogs' yard (his current obsession) and be unable to escape. But he's happier now. He sleeps more soundly.

When my cat first got sick, I panicked. I was not ready to let him go. Worse than the sadness, perhaps, was the embarrassment I felt at how it unraveled me. He was an old cat. He was a cat. Friends of mine were shouldering such epic loss -- a parent, a spouse, a child. I felt like I was just dipping a toe in the stream of grief that life holds for a human being -- and it had undone me. Still, the loss of any true companion can be excruciating. It's just in our nature.

Each night at 10:30 p.m. we wander outside and sit together on the gravel driveway. He stares up at a streetlight where the dragonflies buzz and cluster. I stare up at the moon. I still don't know if he'll die next month, or next year. But I try to be grateful that today, at least, my cat got to live.