How I found a home with the Juggalos

The Insane Clown Posse's annual fest is widely reviled, but I saw a sense of family, and a raw anger, I understood 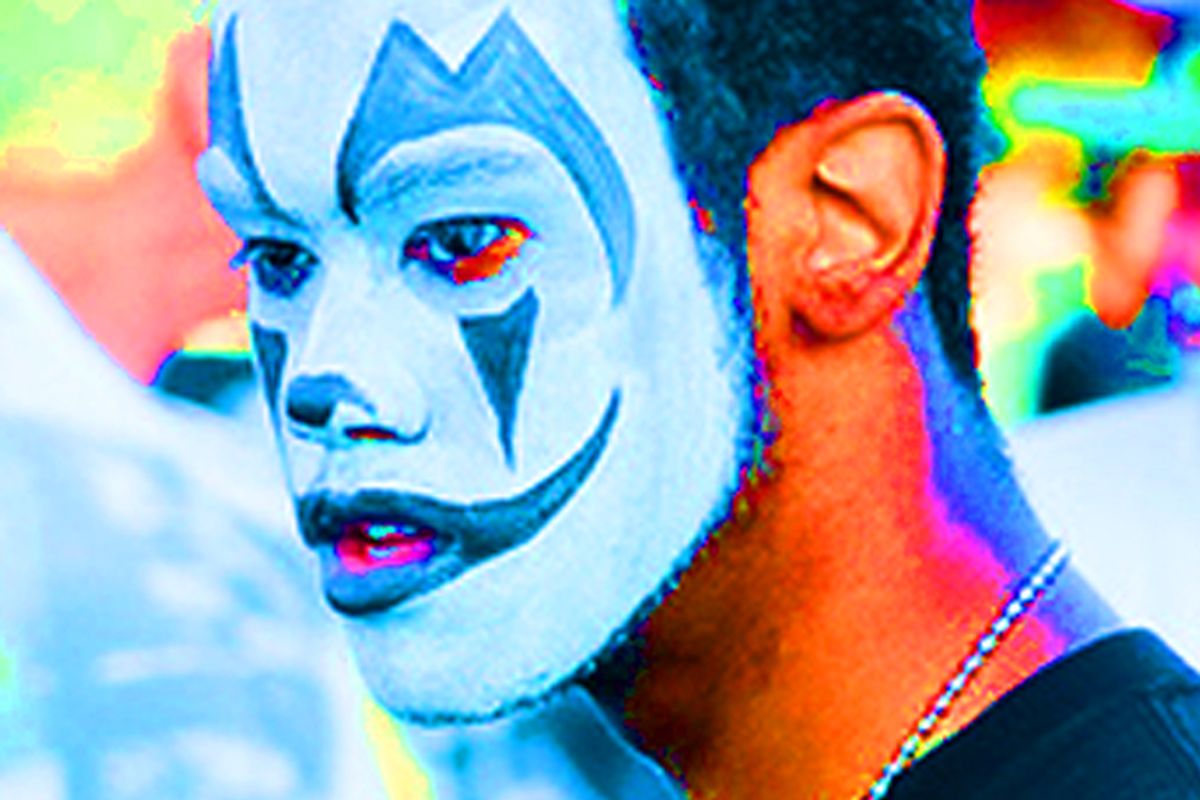 We got to the 12th annual Gathering of the Juggalos early in the morning last Sunday. The event is held every year inside Illinois' Shawnee National Forest, near a cave once used by marauders who hid there to attack people on the Ohio River. I was there with my best friend Farris. We were exhausted -- and a little afraid of what might happen to us.

"Whoop whoop!" someone screamed at us in a car as they passed, and we screamed right back, but more out of fear and surprise than anything else.

As you may have read, the Gathering of the Juggalos is a four-day event, hosted by Insane Clown Posse, that consists of horror rap, lots of drugs, women flashing their breasts, horrific sanitary conditions and Faygo soda, the event's officially unofficial drink, which is poured, chugged and sprayed in ample amounts. Last year, the Gathering drew attention after performer Tila Tequila was pelted with empty bottles and feces. But the bands who play here, and their fans, have been the subject of hand-wringing news reports for years. Insane Clown Posse sell shirts that say, "Most Hated Band in the World," which is hard to argue with. It would not be an uncommon opinion to say the Juggalos represent the end of civilization.

Of course, whatever poor people are up to always represents the end of civilization. Anything that makes poor people get loud and rowdy scares us middle-classers -- which, thank you very much, I am.

I live in New York. I have wacky frames for my glasses. Hell, I'm a performance artist who performs pop songs in downtown venues, even in a few museums. I have rehearsals in which the words "pedagogical" and "hermeneutics" get bandied about.

But years ago, I was a skinny white kid in Texas who used to get followed in the mall while wearing my Public Enemy shirt. I wrote intense and heartfelt "screw the world" rants in my journal. I was a dork who got into fights, who may or may not have done a few different drugs, who "borrowed" things from gas stations, almost got shot by the police, was on welfare.

I knew I identified with the Juggalos on some level, and I knew they were artistically interesting. So I went to the Gathering to research a show I'm making about them at, yep, a downtown New York theater (the Kitchen, January-February 2012! Come check it out!). And I used my big vocabulary to justify my interest to others, who were a little taken aback that I was tackling this, especially after doing a Beyoncé concert reenactment and a two-part Britney Spears/Hannah Montana epic.

Hipsters don't get Insane Clown Posse. While they chuckle over the "Miracles" video and forward it on to friends, they go grandpa on me for defending these degenerate, stupid, creepy clowns. Meanwhile, Odd Future and Tyler the Creator are just as offensive, misogynist and homophobic as Insane Clown Posse. Somehow, they're critical darlings.

Don't get me wrong: Lyrics I overheard at the Gathering made me cringe to the depths of my feminist soul. But I was surprised how comfortable I was with these guys -- and ladies, who must have made up at least 40 percent of the crowd.

It was the economics of the place that I first felt at home with, the small-form poor-people capitalism. Adam Smith would have been fascinated. The Juggalos sold drugs, like I mentioned, as well as handmade paintings of evil clowns and glow-in-the-dark hatchets. Water cost money, and so did the privilege of writing on an attractive girl's stomach. This was the opposite of the punk ethos, in which you resent having to pay even $5 to see 12 bands. That bourgeois posture of poverty always rankled me. Juggalos don't go in for that anarchist, everything-should-be-free thing. Screw that. They need gas money.

Twiztid, one of the many Psychopath Records acts on the festival roster and arguably more popular than the ICP, even did a little grass-roots market research. They held a "seminar" in the tent, a regular feature of the Gathering that is part comedy show and part question-and-answer session. They asked for a show of hands in order to gauge the success of WF*ckOff Radio, their online radio station. It was about half the crowd. Then they asked how many people used Twitter. It was only about a quarter.

"OK, OK, that's good to know, because this is how we research that shit."

Farris stood in the tent wearing his Psychopathic Records hat (which I dorkily got excited about because it echoes the NWA hats that Eazy-E and company used to wear). He said the Gathering felt like a tent revival.

Which is another thing I think I liked about it. I grew up Pentecostal, in a small, tight band of churchgoers who met once a week, spoke in tongues and other such things that people make fun of and fear. Lots of things sucked about it -- and I mean lots -- but there was still a feeling generated by all of us in the same room, trying to have mystical experiences, singing real American Southern hymns that sounded like where we lived (much better than that old dry Episcopal music) and trading run-of-the-mill life where you had to act normal for a world of intensity and shouting and crying. It bound us together.

I loved the fact that, unlike your typical outdoor concert series or church camp, there was absolutely no one -- other than a smattering of poorly disguised bloggers and media people roaming about, snapping the requisite pictures of sunburned and heavy bodies -- watching over this whole thing. In this underground world, Q&A's served as market surveys and handmade signs were billboards. And yes, bad things happened. A fellow died, for example, which is horrible. But for those of us who lived, who cheered on the Prince impersonator who battled uphill (unsuccessfully) to dethrone the Michael Jackson impersonator in a "party" hosted in a side area by Violent J who was tossing free food into the crowd, it was kinda magical. If filth and a few thousand crazies are your idea of magical.

Turns out for me, and the bits of East Texas cracker that still exist inside me, they are.

Again, I'm not saying that being in a crowd full of Juggalos isn't something to worry about. There were fast-moving vehicles flying around on and off the paths, unsanctioned fireworks, the grossest bathrooms ever and the trash- and bottle-throwing outrageousness of the crowds, supremely tweaked and rolling and high individuals you normally just see simmering angrily in stores most teenagers wouldn't even take a part-time job in. Some guys in the crowd held up tiki torches instead of lighters during Psychopathic Records artist Boondox's set.

And you can't gloss over the misogyny in some of the songs. I would say it was a more welcoming environment than other concerts I've been to, with their built-in meathead contingent of frat guys, but still. I wish some intrepid feminist scholars would go study the Gathering, with its 40 percent female attendees and the casual camaraderie among the fans, male and female, and the weird, gleeful nudity and report back to me.

But, despite the lack of safety, I felt safe. Ish. And I like feeling safe-ish. I knew to duck the technically-against-the-rules fireworks being shot off around me. I knew that when I got hit with a bottle it wasn't a big deal. No one was bumping into me (unless I went into the mosh pit, of course) and starting fights like I've seen at Apple- and AmEx-sponsored outdoor festivals. Everyone, even when they fought over fireworks being fired at someone's tent, seemed able to relax. Probably because, for once, these Juggalos weren't gritting their teeth at some stranger in the real world. They were among their fam-i-ly, as the chant goes. When you think about how much every one of those people, on sight, would be kicked out or followed or fretted over in any store or restaurant in the country, you can understand why they embrace each other so hard.

It really did feel like a family, though. A weird, unbathed family, to be sure, but one that I was surprised to find I kinda sorta belong to. There's still a shoplifter in me, still someone who is afraid of the cops, still someone who feels messed up and damaged and likes danger. It doesn't matter how many Urvashi Vaid books I read or how many times I say "epistemological." I'm still a juggalo.

On Monday morning, it was all over. Farris was still wiping Faygo soda off his glasses. My bag was full of handmade clown paintings and glow-in-the-dark hatchets I'd bought.

Staring out the plane window, I started to feel like that one summer I went to Christian camp and actually got into it. What would my friends think? What do I do with the information that I actually enjoyed myself at the Gathering of the Juggalos?

Neal Medlyn is a performance artist in New York whose pop music and pop star based shows have appeared at the Kitchen, PS122, Dance Theater Workshop, the New Museum for Contemporary Art and others. He has toured his work around the US and internationally and is a co-host and co-creator of Our Hit Parade monthly at Joe's Pub. He has also written for New York magazine online and Nerve. He has a show based on juggalos and the Insane Clown Posse in late January, early February 2012 at the Kitchen.