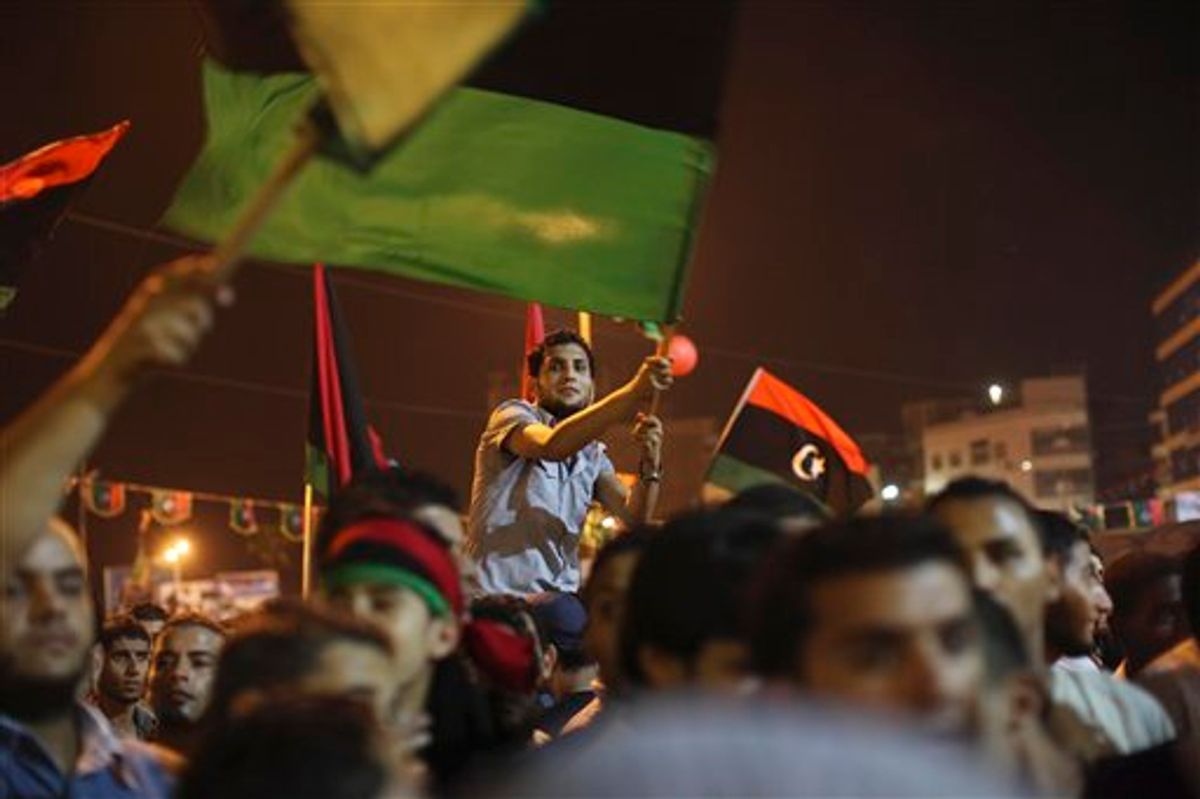 A senior rebel official says the military unit in charge of protecting Moammar Gadhafi and the capital Tripoli has surrendered. Mahmoud Shammam, the rebel minister of information, told the Associated Press on Sunday that the unit commander "has joined the revolution and ordered his soldiers to drop their weapons."

When the unit dropped its arms, it essentially opened the way for the rebels to enter the city with little resistance.

The trappings of Moammar Gadhafi's regime crumbled Sunday as hundreds of euphoric Libyan rebels overran a major military base defending the capital, carted away truckloads of weapons and raced to the outskirts of Tripoli with virtually no resistance.

The rebels' surprising and speedy leap forward, after six months of largely deadlocked civil war, was packed into just a few dramatic hours. By nightfall, they had advanced more than 20 miles to the edge of Gadhafi's last major bastion of support.

Along the way, they freed several hundred prisoners from a regime lockup. The fighters and the prisoners -- many looking weak and dazed and showing scars and bruises from beatings -- embraced and wept with joy.

Thousands of jubilant civilians rushed out of their homes to cheer the long convoys of pickup trucks packed with rebel fighters shooting in the air. Some were hoarse, shouting: "We are coming for you, frizz-head," a mocking nickname for Gadhafi. In villages along the way that fell to the rebels one after another, mosque loudspeakers blared "Allahu Akbar," or "God is great."

"We are going to sacrifice our lives for freedom," said Nabil al-Ghowail, a 30-year-old dentist holding a rifle in the streets of Janzour, a suburb just six miles west of Tripoli. Heavy gunfire erupted nearby.

As town after town fell and Gadhafi forces melted away, the mood turned euphoric. Some shouted: "We are getting to Tripoli tonight." Others were shooting in the air, honking horns and yelling "Allahu Akbar."

Inside Tripoli, widespread clashes erupted for a second day between rebel "sleeper cells" and Gadhafi loyalists. Rebels fighter who spoke to relatives in Tripoli by phone said hundreds rushed into the streets in anti-regime protests in several neighborhoods.

Libyan state television aired an angry audio message from Gadhafi Sunday night, urging families in Tripoli to arm themselves and fight for the capital.

"The time is now to fight for your politics, your oil, your land," he said. "I am with you in Tripoli -- together until the ends of the earth," Gadhafi shouted.

The day's first breakthrough came when hundreds of rebels fought their way into a major symbol of the Gadhafi regime -- the base of the elite 32nd Brigade commanded by Gadhafi's son, Khamis. Fighters said they met with little resistance.

Hundreds of rebels cheered wildly and danced as they took over the compound filled with eucalyptus trees, raising their tricolor from the front gate and tearing down a large billboard of Gadhafi.

Inside, they cracked open wooden crates labeled "Libyan Armed Forces" and loaded their trucks with huge quantities of munitions. One of the rebels carried off a tube of grenades, while another carted off two mortars.

"This is the wealth of the Libyan people that he was using against us," said Ahmed al-Ajdal, 27, pointing to his haul. "Now we will use it against him and any other dictator who goes against the Libyan people."

One group started up a tank, drove it out of the gate, crushing the median of the main highway and driving off toward Tripoli. Rebels celebrated the capture with deafening amounts of celebratory gunfire, filling the air with smoke.

Across the street, rebels raided a huge warehouse, making off with hundreds of crates of rockets, artillery shells and large-caliber ammunition. The warehouse had once been using to storage packaged foods, and in the back, cans of beans were still stacked toward the ceiling.

The prisoners had been held in the walled compound and when the rebels rushed in, they freed more than 300 of them.

"We were sitting in our cells when all of a sudden we heard lots of gunfire and people yelling 'Allahu Akbar.' We didn't know what was happening, and then we saw rebels running in and saying 'We're on your side.' And they let us out," said 23-year-old Majid al-Hodeiri from Zawiya. He said he was captured four months ago by Gadhafi's forces and taken to base. He said he was beaten and tortured while under detention.

Many of the prisoners looked disoriented as they stopped at a gathering place for fighters several miles away from the base. Some had signs of severe beatings. Others were dressed in tattered T-shirts or barefoot. Rebels fighters and prisoners embraced.

From the military base, about 16 miles west of Tripoli, the convoy pushed on toward the capital.

Mahmoud al-Ghwei, 20 and unarmed, said he had just came along with a friend for the ride .

"It's a great feeling. For all these years, we wanted freedom and Gadhafi kept it from us. Now we're going to get rid of Gadhafi and get our freedom," he said.

At nightfall, the fighters reached Janzour, a Tripoli suburb. Along the way, they were greeted by civilians lining the streets and waving rebel flags. One man grabbed a rebel flag that had been draped over the hood of a slow-moving car and kissed it, overcome with emotion.

"We are not going back," said Issam Wallani, another rebel. "God willing, this evening we will enter Tripoli."

The uprising against Gadhafi broke out in mid-February, and anti-regime protests quickly spread across the vast desert nation with only 6 million people. A brutal regime crackdown quickly transformed the protests into an armed rebellion. Rebels seized Libya's east, setting up an internationally recognized transitional government there, and two pockets in the west, the port city of Misrata and the Nafusa mountain range.

Gadhafi clung to the remaining territory, and his forces failed to subdue the rebellion in Misrata, Libya's third-largest city, and in the Nafusa mountains. Since the start of August, thousands of rebel fighters, including many who fled Gadhafi-held cities, joined an offensive launched from the mountains toward the coast.

The fighters who had set out from the mountains three weeks ago rushed toward Tripoli on Sunday, start out at dawn from a village just east of the coastal city of Zawiya. Only a day earlier had the rebels claimed full control of Zawiya, an anti-regime stronghold with 200,000 people and Libya's last functioning oil refinery.

Rebels said Saturday that they had launched their first attack on Tripoli in coordination with NATO and gunbattles and mortar rounds rocked the city. NATO aircraft also made heavier than usual bombing runs after nightfall, with loud explosions booming across the city.

On Sunday, more heavy machine gun fire and explosions rang out across the capital with more clashes and protests.

Government minders in a hotel where foreign journalists have been staying in Tripoli armed themselves on Sunday in anticipation of a rebel take over. The hotel manager said he had received calls from angry rebels threatening to charge the hotel to capture the government's spokesman, Moussa Ibrahim.

Heavy gun fire was heard in the neighborhood around the Rixos hotel, and smoke was seen rising from a close by building.

"We are scared and staying in our houses, but the younger boys are going out to protect our homes," said a woman who spoke to The Associated Press by telephone from the pro-rebel Tripoli neighborhood of Bin Ashour. She spoke on condition of anonymity for fear of reprisal. She said a neighbor's son was shot dead on Saturday night by Gadhafi troops as he tried to protect his street with a group of rebel youth.

Nuri al-Zawi, another resident of Bin Ashour, told the AP by phone that the rebels were using light arms to protect their streets, and in some cases were using only their bodies to fend off the Gadhafi troops riding in pickup trucks.

"We are used to this situation now. We are a city that is cut off from the world now," he said.

The residents reported clashes in neighborhoods all over Tripoli as well as the city's Mitiga military airport. They said they heard loud explosions and exchanges in of gunfire in the Fashloum, Tajoura and Bin Ashour neighborhoods. Residents and opposition fighters also reported large anti-regime protests in those same neighborhoods. In some of them, thousands braved the bullets of snipers perched atop high buildings.

Mukhtar Lahab, a rebel commander closing in on Tripoli and a former captain in Gadhafi's army, said his relatives inside the capital reported mass protests in four neighborhoods known as sympathetic to the opposition: Fashloum, Souk al-Jouma, Tajoura and Janzour. He said mosques there were rallying residents with chants of "Allahu Akbar" or "God is great," broadcast on loudspeakers.

Laub and Hubbard reported from Janzour, Libya. Hadeel Al-Shalchi in Cairo and Slobodan Lekic in Brussels contributed to this report.