On behalf of Wall Street, Obama officials pressure the NY State Attorney General to put an end to investigations 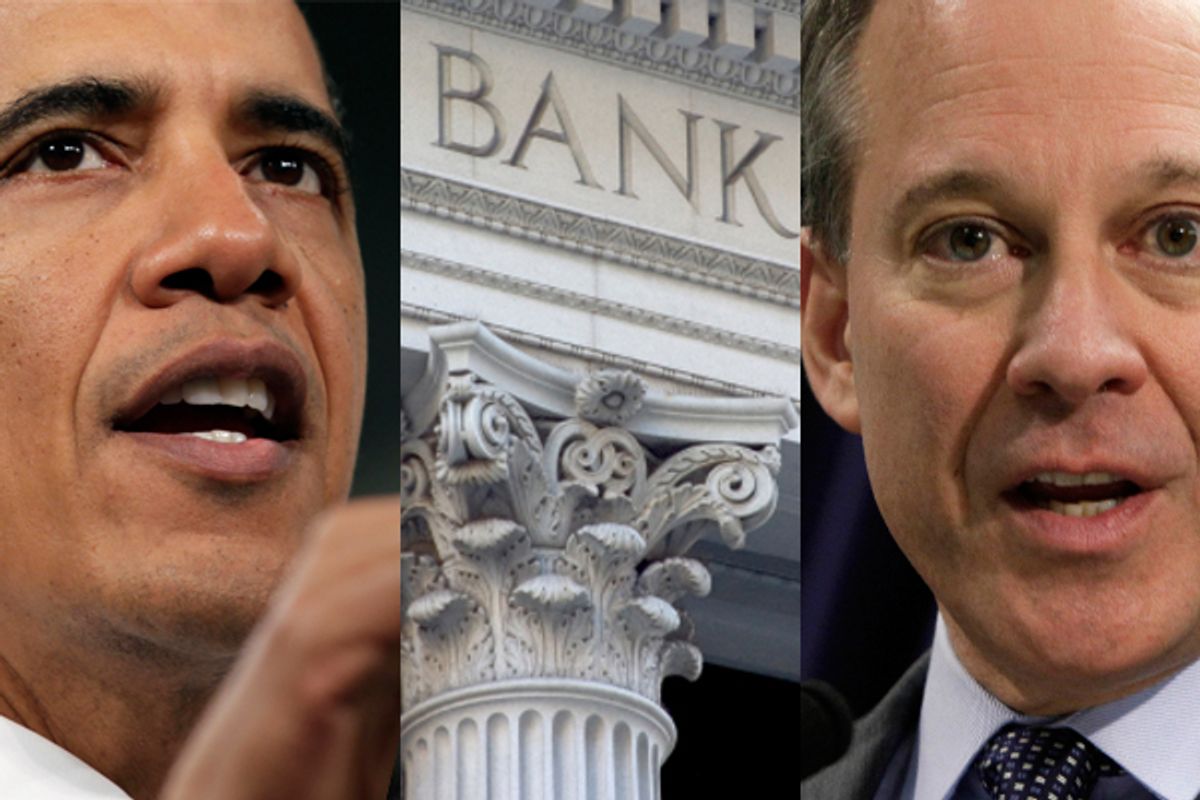 In mid-May, I wrote about the commendable -- one might say heroic -- efforts of New York Attorney General Eric Schneiderman to single-handedly impose meaningful accountability on Wall Street banks for their role in the 2008 financial crisis and the mortgage fraud/foreclosure schemes.  Not only was Schneiderman launching probing investigations at a time when the Obama DOJ was steadfastly failing to do so, but -- more importantly -- he was refusing to sign onto a global settlement agreement being pushed by the DOJ that would have insulated the mortgage banks (including Bank of America, Citigroup, JPMorgan Chase and Wells Fargo) from all criminal investigations in exchange for some relatively modest civil fines.  In response, many commenters wondered whether Schneiderman, if he persisted, would be targeted by the banks with some type of campaign of destruction of the kind that brought down Eliot Spitzer, but fortunately for the banks, they can dispatch their owned servants in Washington to apply the pressure for them:

Eric T. Schneiderman, the attorney general of New York, has come under increasing pressure from the Obama administration to drop his opposition to a wide-ranging state settlement with banks over dubious foreclosure practices, according to people briefed on discussions about the deal.

In recent weeks, Shaun Donovan, the secretary of Housing and Urban Development, and high-level Justice Department officials have been waging an intensifying campaign to try to persuade the attorney general to support the settlement, said the people briefed on the talks.

Mr. Schneiderman and top prosecutors in some other states have objected to the proposed settlement with major banks, saying it would restrict their ability to investigate and prosecute wrongdoing in a variety of areas, including the bundling of loans in mortgage securities.

But Mr. Donovan and others in the administration have been contacting not only Mr. Schneiderman but his allies, including consumer groups and advocates for borrowers, seeking help to secure the attorney general's participation in the deal, these people said. One recipient described the calls from Mr. Donovan, but asked not to be identified for fear of retaliation.

Not surprising, the large banks, which are eager to reach a settlement, have grown increasingly frustrated with Mr. Schneiderman. Bank officials recently discussed asking Mr. Donovan for help in changing the attorney general’s mind, according to a person briefed on those talks.

In response to this story, the DOJ claims that the settlement is necessary to help people whose homes are in foreclosure, an absurd rationalization which Marcy Wheeler simply destroys.  Meanwhile, Yves Smith, whose coverage of banking and mortgage fraud (and the administration's protection of it) has long been indispensable, writes today:

It is high time to describe the Obama Administration by its proper name: corrupt.

Admittedly, corruption among our elites generally and in Washington in particular has become so widespread and blatant as to fall into the "dog bites man" category. But the nauseating gap between the Administration's propaganda and the many and varied ways it sells out average Americans on behalf of its favored backers, in this case the too big to fail banks, has become so noisome that it has become impossible to ignore the fetid smell.

The Administration has now taken to pressuring parties that are not part of the machinery reporting to the President to fall in and do his bidding. We’ve gotten so used to the US attorney general being conveniently missing in action that we have forgotten that regulators and the AG are supposed to be independent.

Her entire analysis should be read.  The President -- who kicked off his campaign vowing to put an end to "the era of Scooter Libby justice" -- will stand before the electorate in 2012 having done everything in his power to shield top Bush officials from all accountability for their crimes and will have done the same for Wall Street banks, all while continuing to preside over the planet's largest Prison State . . . for ordinary Americans convicted even of trivial offenses, particularly (though not only) from the War on Drugs he continues steadfastly to defend.  And as Sam Seder noted this morning, none of this has anything to do with Congress and cannot be blamed on the Weak Presidency, the need to compromise, or the "crazy" GOP.

I particularly regret that my book to be released in October -- examining America's two-tiered justice system, whereby political and financial elites are immunized from accountability even for the most egregious crimes while ordinary Americans (particularly poor and minorities) suffer unfathomably harsh punishments for minor transgressions -- won't include this incident, as it so perfectly highlights the book's argument (though it's long been obvious that Wall Street criminals would be immunized from accountability and the book deals with that extensively).  Also worth reading in that regard is this article from Joseph Stiglitz on how failure to criminally prosecute mortgage fraud would destroy the rule of law. As I wrote at the end of my May post on Schniederman:

It is worth keeping a watchful eye on Schneiderman's investigative efforts and doing everything possible to provide what will undoubtedly be much-needed support if, as appears to be the case, he is serious about taking on these pernicious factions and impeding the conspiring by the political class to protect their benefactors/owners.

When I wrote that, I assumed the pressure would come from the banks themselves, not from top Executive Branch officials.  At this point, though, the mistake is to consider those entities as separate and distinct at all.  As Democratic Sen. Dick Durbin said of the branch of government in which he serves:  banks "frankly own the place."  Capitol Hill is obviously not the only property they own on Pennsylvania Avenue.