The colorful world of forgotten trains 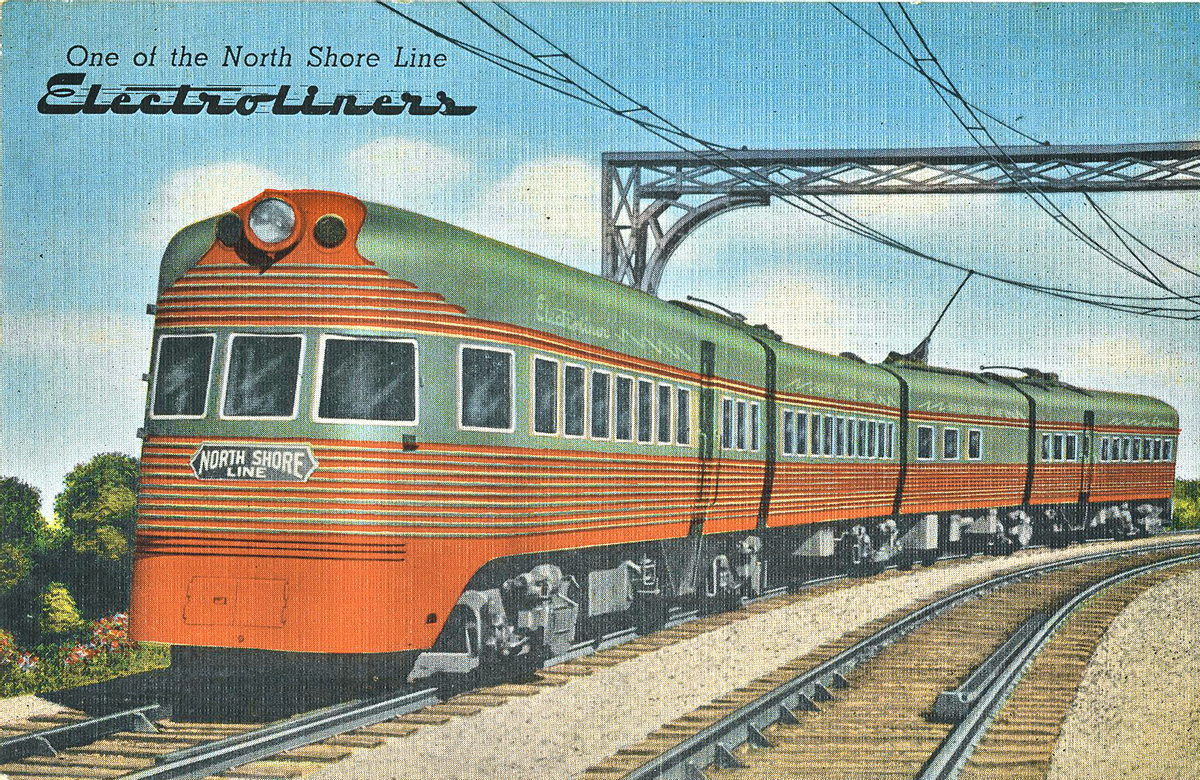 When I was 5-6 years old my Mom and I would take the "L" to church every Sunday between suburban Evanston, Ill., and Chicago. The trains of the CTA (Chicago Transit Authority) were colorful yet hardly eye-popping, but each Sunday I used to see one train that was the exception to the normal livery. It was deep turquoise with salmon red stripes and, get this, silver lightning bolts on its sides. It would zip up to the station platform, and after a very brief stop it would disappear from the terminal and down a distant curve. My mom called it "The Mysterious Train." To a kid of my age, the existence of this outrageous looking train was pure magic!

An Electroliner as I would have seen it on the Chicago L circa 1962. (Scholes Photos)

Turns out "The Mysterious Train" was actually an "Electroliner." These trains ran on the tracks of the Chicago North Shore & Milwaukee Ry (The North Shore Line) and the CRT (Chicago Rapid Transit -- later the CTA) between 1941 and the railway's abandonment in 1963. The "World's First All Electric Streamliners" traveled the round-trip between the downtown Chicago "Loop" and the heart of Milwaukee, Wis., about 85 miles away. There were two four-car articulated sets built and they routinely hit 90 miles per hour during their "5 trips each way daily."

By the late 1930s, the North Shore Line's business had been decimated by the Great Depression, leading to receivership and a dip in employee morale. It was the era of "Streamlining" and it was time for the North Shore to get up to date. The modern, aerodynamic styling of the Burlington Route's 1934 stainless-steel "Pioneer Zephyr" diesel streamliner appealed to the imagination of the North Shore's management. In 1939 they took a huge financial risk and ordered the production of the two trains. The North Shore could now compete on a Chicago/Milwaukee schedule with the new  "400," and Otto Kuhler designed "Hiawatha"steam-streamliners, which travelled on the paralleling Chicago & North Western and Milwaukee Road railroads.

The Electroliners were designed by the architectural/design firm James F. Eppenstein Associates. I can't think of any train with such a distinctive (and labor-intensive) paint scheme. Each stripe had to be hand-masked and painted. Within a year's time the Electroliners had evolved into being the defining image of the North Shore Line -- they had become the railway's branding tool!

Invitation to the unveiling of the Electroliners February 1941

A stunning profile view of one of the trains upon delivery. (From an original Kodachrome transparency by Charles E. Keevil, collection of Walter R. Keevil)

Trade advert 1941 with photo by Hedrich-Blessing

In service careers of only 22 years, the twin trains each ran more than 3 million miles, carrying millions of riders who enjoyed the comforts of air-conditioning, plus the luxury offered by a tidy, compact tavern-lounge car.

Upon the North Shore Line's demise, the Electroliners were purchased by Philadephia's "Red Arrow Lines" where they ran from 1964 to approximately 1976 as "Liberty Liners."

One of the converted Electroliners (re-named "Liberty-Liners") outside Philadelphia circa 1965.

One set now sits outside awaiting restoration at the Rockhill Trolley Museum in Orbisonia, Pa.

The other is lovingly attended to in beautifully restored condition at the Illinois Railway Museum in Union, Ill.

Special thanks to Walter Keevil, John Horachek, Mitch Markovitz and Corrie Lebens for their help!

*All images courtesy of the author