Who are the "sons of Mubarak"?

In Egypt, a small but vocal minority still supports the fallen dictator 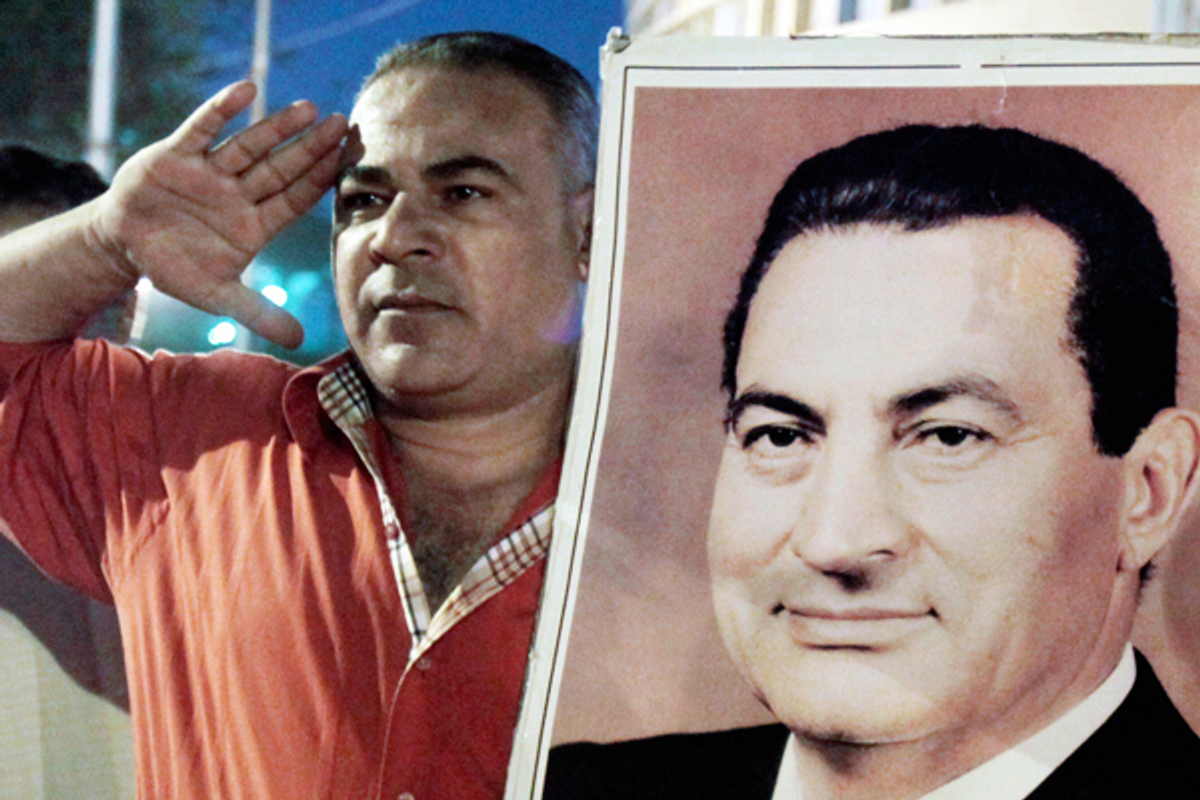 CAIRO, Egypt -- Egypt's revolutionaries received a crucial bit of closure earlier this month when Egypt's ailing ex-president, 83-year-old Hosni Mubarak, was wheeled inside the caged dock of a Cairo courtroom, clad in a white prison jumpsuit.

The televised images of Mubarak, as shocking and surreal as they were, offered many Egyptians a glimmer of hope that justice would finally prevail after the bloodshed of the January 25 uprising and three decades of repressive rule.

Not everyone, however, was cheering.

Outside the court, hundreds of Mubarak allies chanted and waived placards of support before and during his trial, which opened on Aug. 3 and met for a second session on Aug. 15.

"Oh Mubarak, hold your head high," screamed protesters, according to Reuters. "We will demolish the prison and burn it down, if Hosni Mubarak is sentenced."

These ardent supporters of the former president -- the self-described "sons of Mubarak" -- hope to spare their former president from the humiliation of detention and intense scrutiny of a public trial.

His most vocal backers may be in the minority these days -- depending on who you ask -- but they are unwavering, both online and on the street, in their conviction that Mubarak, who is under detention in a Cairo hospital until his next court date, is a national hero who led the Arab world's most populous nation to 30 years of peace, prosperity and stability.

"We traded our national security for political corruption and economic chaos," said Yousry Abdel Razik, a lawyer who attended the recent proceedings. "This was no revolution. Revolutions are supposed to make countries better, not worse."

Abdel Razik recently signed on to give pro-bono legal aid to Mubarak's defense team, which is led by veteran Egyptian lawyer Farid el-Deeb.

The charges Mubarak is facing -- corruption, abuse of power and ordering his security forces to kill more than 800 protesters -- could result in the death penalty if he is found guilty.

That harsh reality alone was enough to bring Abdel Razik, 35, to tears during the trial.

"The only other time I've cried in my lifetime was when my father died two years ago," he said. "But I love Mubarak. He is my father too."

On the west bank of the Nile River, a few dozen Mubarak supporters have set up a makeshift, Tahrir-like rallying point in a traffic circle. There, they occasionally meet to drink tea, discuss the latest news and reminisce about the old days.

They are angry that billboards carrying Mubarak's once-ubiquitous image have been torn down, and that his name has been scrubbed from schools and subway station maps.

Most of them -- men and a few women, young and old, rich and poor -- are still dumbfounded by Mubarak's ouster. They point fingers at various foreign elements, mostly the United States and Israel, as the ones responsible for his downfall.

"My family and I never benefited at all from Mubarak, economically speaking," said Karim Hussein, who grew up in a working class neighborhood near the Pyramids. "But I am proud to defend him even to this day."

But a day after thousands of young Egyptians descended on Cairo's Tahrir Square on January 25, aided in part by the coordinated use of social media, Hussein launched his own Facebook page in support of Mubarak.

He said he was inspired to defend his president because he thought protesters were treating the elderly leader unfairly after so many years in power.

The Facebook group, translated as "We Are Sorry Mr. President," organizes rallies and celebrates and defends Mubarak's "achievements." The page has attracted more than 100,000 fans to date, though Hussein admits some of those followers are hackers and naysayers.

In a troubling reversal, it is now these Egyptians, those that support Mubarak, who are on occasion the target of violence. They point to bandages, casts, scars and other battle wounds as signs that they have now become Egypt’s most marginalized minority.

Hassan Ghandour, a 30-year-old who claimed to be a former soldier in Mubarak's presidential guard unit, unbuttoned his shirt to reveal a long, deep gash he received during clashes that erupted during Mubarak's trial on Aug. 15.

Insults between the two opposing sides of protesters had escalated into an all out brawl, leaving dozens injured.

Ghandour denied that he or any of his comrades were "counter-revolutionaries" seeking to reinstall the former leader, as reform activists frequently claim.

"All of this chaos happening now is not from us," Ghandour said. "It's because of the revolution that burned and destroyed our country."

Most of the "sons of Mubarak" believe their former president will soon have his legacy restored.

Abdel Razik, the volunteer lawyer, said he is confident that the former president will be exonerated within a few months.

At the very least, said a beaming Abdel Razik, the Egyptian public will no longer be able to watch live images of Mubarak in a cage -- the judge ruled that the trial would no longer be televised.