The insanity of running as a sane GOP candidate

Jon Huntsman is talking up science and bashing debt ceiling brinkmanship: What on earth is he thinking? 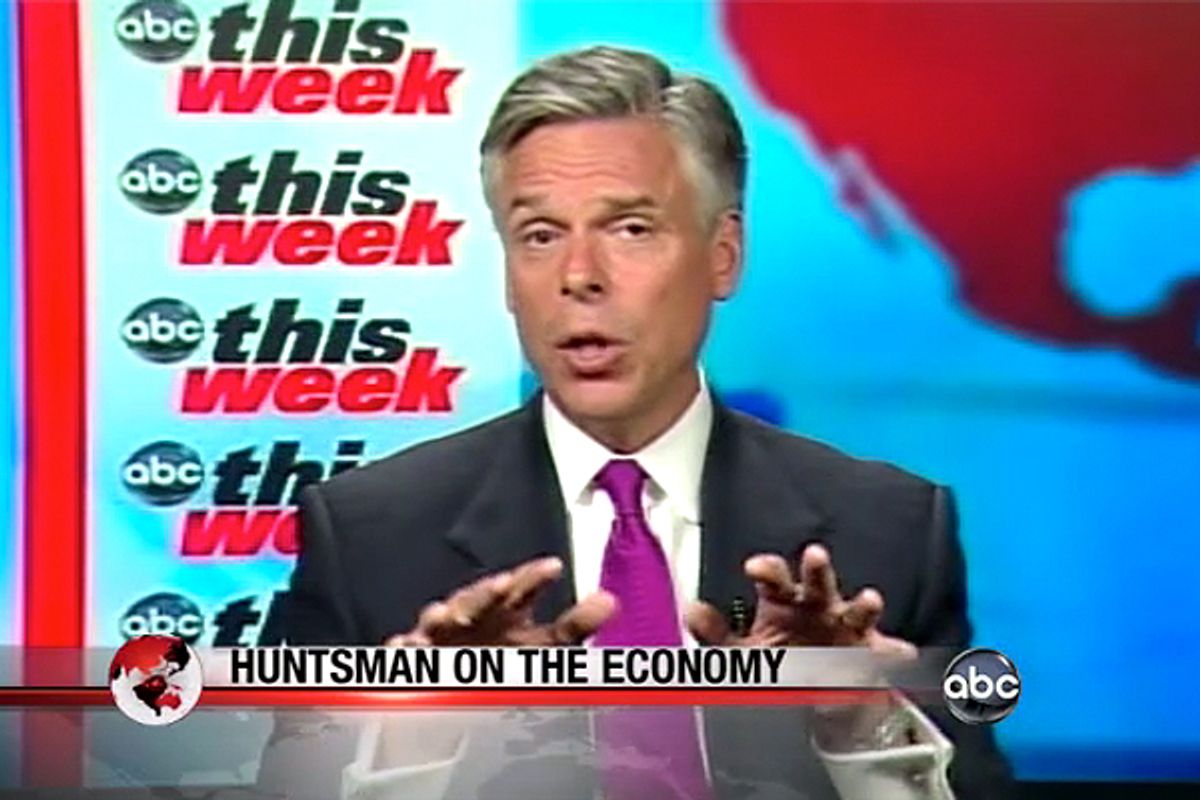 Jon Huntsman has made no secret of his desire to emulate the strategy that John McCain used when he ran for the GOP presidential nomination in 2000.

In that campaign, McCain shunned Iowa and then ambushed George W. Bush in New Hampshire, catering to the state's independent spirit with his reform message and racking up a shocking 19-point victory.  Overnight, McCain became a national celebrity, virtually erasing Bush's previously enormous fundraising and national polling advantages. Eventually, Bush wore him down and prevailed, but McCain emerged from the race as the most popular political figure in the country -- and the "next in line" guy for the next open GOP nomination.

That's the basic trajectory Huntsman had in mind when he hired McCain's 2000 strategist John Weaver to run his campaign, and when he decided a while back to skip Iowa and to disparage the vagaries of its caucus system. And it seems to be what he's aiming for with his new strategy: defiant attacks on the Tea Party orthodoxy that has infected the Obama era GOP.

Huntsman debuted his message in a pretaped interview that aired on ABC over the weekend, declaring that his fellow GOP candidates are "too far to the right" and have brought "zero substance" to the debate, and claiming that "I wouldn't necessarily trust any of my opponents who were on the recent debate stage with me when every single one of them would have allowed this country to default." He also sent out a tweet last week affirming his belief that evolution and global warming are both real.

The idea is to build the same kind of maverick image that McCain, with his Straight Talk Express and campaign finance reform crusade, established for himself in 2000. There is some logic to this: Surely, there are a fair number of Republican voters who are bothered by the party's direction these past few years, and even if they're a minority within the party, it's not like anyone else is airing their concerns. Plus, it's a great way to rekindle the media's interest in Huntsman, which seemed to be (finally) waning these past few weeks, especially after his dreary performance at the Aug. 11 GOP debate.

But there are some crucial differences between what McCain did in 2000 (and why he was able to do it) and what Huntsman's strategy is likely to produce.

One is that McCain wasn't actually that far off the GOP reservation. His main break with the GOP establishment was over campaign finance reform, an issue that mattered for nothing to most Republican voters but that mattered a great deal to the party's interest group establishment.  To them, McCain's crusade was proof that he wasn't a team player, and they mobilized to stop him once he pulled off his New Hampshire win. Beyond that, McCain presented himself as a devout Reagan/Goldwater conservative. Huntsman, by contrast, now seems to be defining himself mainly as a man who's willing to say the same things about the GOP that Democrats say: It's why the DNC followed up his ABC interview with a glowing press release.

There's also matter of biography. McCain's own heroic personal story meshed neatly with the maverick-warrior image he was trying to create. Huntsman doesn't have the kind of battle scars that McCain did, and that Republican voters tend to appreciate. Nor does he seem especially skilled at selling his supposed authenticity, another area where McCain (with his everything-on-the-record bull sessions) excelled in 2000.

But the more fundamental problem for Huntsman is that the Republican Party is just in a different place than it was 11 years ago. Ever since Barack Obama was elected, a siege mentality has gripped the GOP. Even Republicans who agree with him on some level are apt to shrug off Huntsman's calls for intraparty soul-searching: There'll be time for that fight after we get the socialist out of the White House, not before.