The demise of Gadhafi -- and an obnoxious talking point

If the Libyan strongman goes, will right-wing hawks still sneer at "leading from behind"? 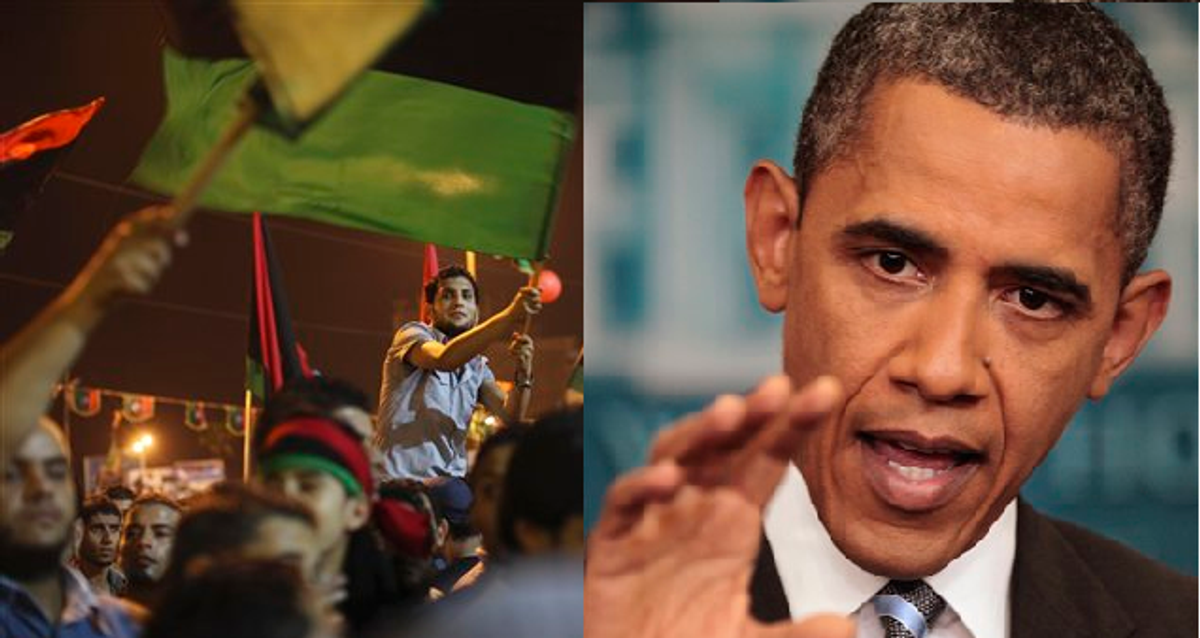 The seemingly imminent demise of Moammar Gadhafi -- he apparently remains in control of at least three sites in Tripoli but there are strong signs the end is near -- does not automatically validate President Obama’s decision to intervene in Libya, nor should it silence the debate over his failure to seek and obtain congressional authorization to do so.

But if this is, in fact, it for the Libyan strongman, it should do damage to a particularly obnoxious anti-Obama talking point from hawks on the right -- the idea that he’s excessively deferential, naïve and just plain weak on the world stage and that his foreign policy can only lead to failure and humiliation.

The Libyan mission was supposed to be proof of this. "Leading from behind" is actually a phrase that an Obama advisor used in a New Yorker piece this spring to describe the administration’s approach to toppling Gadhafi. The idea was that the president was seeking a sensible balance by trying to boost the rebel cause while minimizing the U.S. footprint, but the right giddily trumpeted the phrase as proof that Obama was only too willing to let America get bullied around. Charles Krauthammer led the charge:

It’s been a foreign policy of hesitation, delay and indecision, marked by plaintive appeals to the (fictional) “international community” to do what only America can.

Others joined in and disdain for the "leading from behind" approach became a common refrain among the GOP’s presidential candidates. For instance, Mitt Romney’s website brags that "[i]nstead of apologizing for America abroad and 'leading from behind,' Mitt Romney will pursue a strategy of American strength." And in his own campaign announcement speech in June, Romney said of Obama:

At a time of historic change and great opportunity in the Arab world, he’s hesitant and uncertain. He hesitated to speak out for the dissidents in Iran. His administration boasts that he is leading from behind in Libya.

In terms of making their case, it certainly helped the right that the NATO-led operation to which Obama committed American support didn’t immediately dislodge Gadhafi, and that it appeared throughout the spring and into the summer that the civil war would continue along indefinitely as a stalemate. It was during this window that Rick Santorum, Romney’s fellow candidate, opined that Libya was "a morass."

But then, all of a sudden, came the past few days and a series of dramatic advances by the rebels, culminating in their move into Tripoli and the arrest of two of Gadhafi’s sons. For now, Gadhafi himself is still at large and his remaining forces seem to be putting up some resistance; rebels were forced to pull back from Green Square on Monday afternoon Tripoli time. But it was still all enough for Obama to issue a statement Sunday night claiming that "the momentum against the Gadhafi regime has reached a tipping point" and that "Tripoli is slipping from the grasp of a tyrant." And for French President Nicolas Sarkozy to say on Monday that "ehe end of Gadhafi and his regime is now inevitable and near."

If Sarkozy is right, then it will be the outcome that hawks on the right have been saying they wanted all along. That it is now on the brink of being achieved five months after the implementation of the no fly zone would seem to suggest that, just maybe, there was actually some wisdom to "leading from behind." At the very least, it exposes the attacks of Krauthammer, Romney and others for what they were: overheated efforts to reinforce the Obama-as-Carter caricature they’ve been pushing since the start of his presidency. Nor is it the first time Obama has defied this caricature: Remember when our "weak" and "naïve" president announced that Osama bin Laden -- the man who had eluded George W. Bush for nearly eight years -- had been killed?

It’s worth repeating that Gadhafi’s fall hardly would hardly guarantee that history will smile on Obama’s handling of Libya. What would come next for the country is an open question, and the possibility that the void created by Gadhafi’s departure will be filled by violence and chaos is all too real. There are plenty of people on both the right and the left who have insisted all along the U.S. had no business intervening, and the latest developments do not necessarily prove them wrong.

But they seem to be a blow to the right-wing hawks who still dominate the GOP’s foreign policy discourse. Not for the first time, they've spent months the past few months crowing that Obama was too incompetent to achieve a goal that he and they shared. But suddenly that goal is on the verge of being realized.