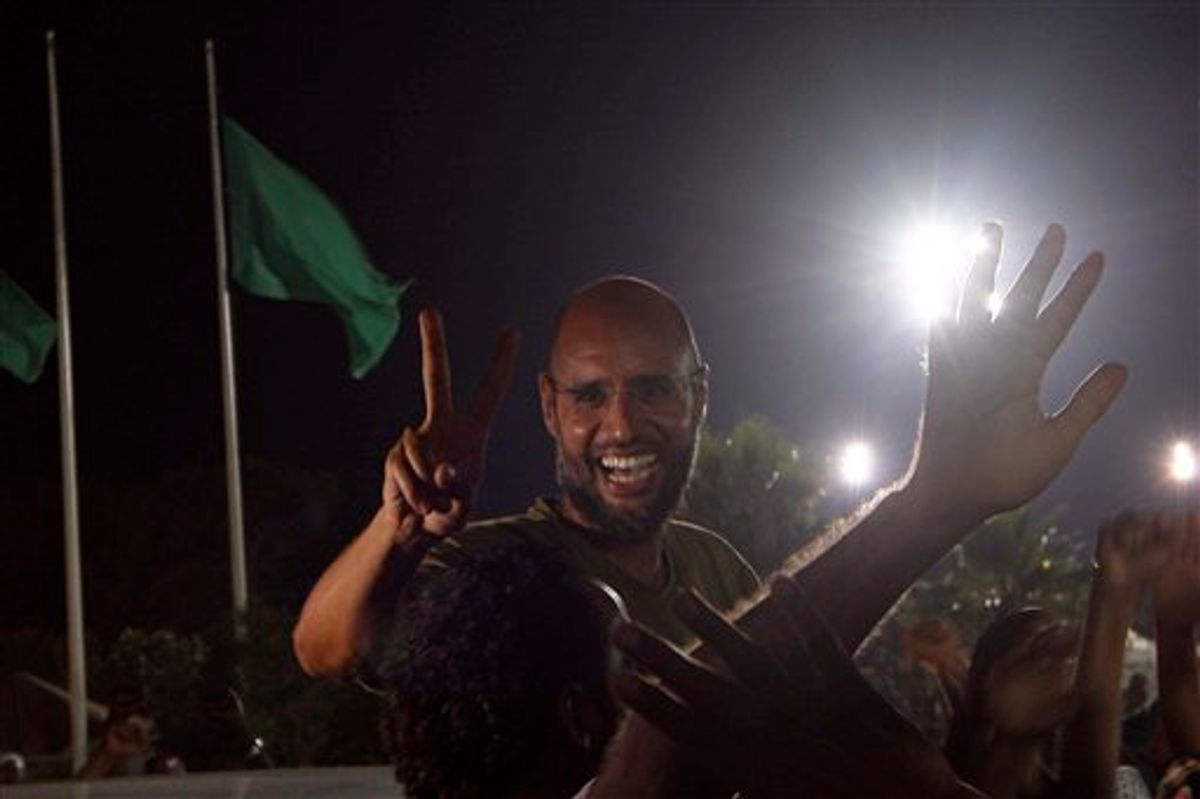 Moammar Gadhafi's son, Seif al-Islam gestures to troops loyal to his father in Tripoli, Libya, Tuesday, Aug. 23, 2011. Seif al-Islam, who was earlier reported arrested by Libya's rebels, turned up early Tuesday morning at the hotel where foreign journalists stay in Tripoli, then took reporters in his convoy on a drive through the city. (AP Photo/Imed Lamloum, Pool) (AP)
--

Fresh fighting erupted in Tripoli on Tuesday hours after Moammar Gadhafi's son turned up free to thwart Libyan rebel claims he had been captured, a move that seems to have energized forces still loyal to the embattled regime.

Rebels and pro-regime troops fought fierce street battles in several parts of the city, a day after opposition fighters swept into the capital with relative ease, claiming to have most of it under their control.

Thick clouds of gray and white smoke filled the Tripoli sky as heavy gunfire and explosions shook several districts of the city of 2 million people. Some of the heaviest fighting was around Gadhafi's Bab al-Aziziya main compound and military barracks.

The compound, which has been heavily damaged by NATO airstrikes, has emerged as one of the centers of government resistance since tanks rolled out Monday and began firing at rebels trying to get in.

Seif al-Islam's sudden -- even surreal -- arrival at a Tripoli hotel where foreign journalists are staying threw the situation in the capital into confusion. The appearance of Gadhafi's son and former heir apparent underlined the potential for the longtime Libyan leader, whose whereabouts remain unknown, to strike back even as his grip on power seemed to be slipping fast.

Rebels say they control most of Tripoli, but they faced pockets of fierce resistance from regime loyalists firing mortars and anti-aircraft guns. Rebel spokesman Mohammed Abdel-Rahman, who was in Tripoli, said the "danger is still there" as long as the longtime Libyan leader remains on the run.

He warned that pro-Gadhafi brigades are positioned on Tripoli's outskirts and could "be in the middle of the city in half an hour."

The rebel leadership seemed stunned that Seif al-Islam was free. A spokesman, Sadeq al-Kabir, had no explanation and could only say, "This could be all lies."

He could not confirm whether Seif al-Islam escaped rebel custody, but he did say that another captured Gadhafi son, Mohammed, had escaped the home arrest that rebels had placed him in a day earlier. On Monday, the rebels had said Seif al-Islam was captured, but did not give details on where he was held.

The Netherlands-based International Criminal Court -- which indicted Seif al-Islam and his father -- had announced his capture, but spokesman Fadi El Abdallah said Tuesday the court never received official confirmation from Libya's rebel authorities that he had been arrested.

Seif al-Islam, with a full beard and wearing an olive-green T-shirt and camouflage trousers, turned up early Tuesday morning at the Rixos hotel, where about 30 foreign journalists are staying in Tripoli under the close watch of regime minders.

Riding in a white limousine amid a convoy of armored SUVs, he took reporters on a drive through parts of the city still under the regime's control, saying, "We are going to hit the hottest spots in Tripoli." Associated Press reporters were among the journalists who saw him and went on the tour.

The tour covered mainly the area that was known to still be under the regime's control -- the district around the Rixos hotel and nearby Bab al-Aziziya, Gadhafi's residential compound and military barracks. The tour went through streets full of armed Gadhafi backers, controlled by roadblocks, and into the Gadhafi stronghold neighborhood Bu Slim.

At Bab al-Aziziya, at least a hundred men were waiting in lines for guns being distributed to volunteers to defend the regime. Seif al-Islam shook hands with supporters, beaming and flashing the "V for victory" sign.

When asked about the ICC's claim that he was arrested by rebels, he told reporters: "The ICC can go to hell," and added "We are going to break the backbone of the rebels."

In Benghazi, the de facto rebel capital hundreds of miles east of Tripoli, the head of the rebel National Transitional Council said the rebels have no idea where the 69-year-old Gadhafi is or whether he is even in Tripoli.

"The real moment of victory is when Gadhafi is captured," Mustafa Abdel-Jalil said. An Obama administration official said the U.S. had no indication that Gadhafi had left Libya.

President Barack Obama said the situation in Libya reached a tipping point in recent days after a five month NATO-led bombing campaign. However, he acknowledged that the situation remained fluid and that elements of the regime remained a threat.

The Obama administration official said the U.S. believes 90 percent of the capital is under rebel control, while regime loyalists still control Sirte and the southern city of Sebha. The official spoke on the condition of anonymity because the official was not authorized to speak publicly.

Gadhafi's forces remained active, firing off a short-range Scud missile Monday near Sirte, Gadhafi's hometown and one of the few remaining cities still under his control, said U.S. military officials, who declined to be identified in order to discuss military operations. It was unclear where the missile landed or if anyone was hurt.

It was only the second Scud missile fired during this year's conflict. On Aug. 15, Libyan government forces launched one near Sirte that landed in the desert outside Brega, injuring no one.

NATO vowed to keep up its air campaign until all pro-Gadhafi forces surrender or return to their barracks. The alliance's warplanes have hit at least 40 targets in and around Tripoli in the past two days -- the highest number on a single geographic location since the bombing started in March, NATO said.

But the situation in Tripoli, a metropolis of 2 million, remained volatile and rebels appeared to be on the defensive, ducking for cover during frequent clashes with regime fighters. Stores were shuttered and large areas were lifeless, including the old gold market, in the past a draw for tourists.

The International Organization for Migration said Tuesday that a rescue mission to pluck 300 foreign nationals from the Libyan capital has been delayed by fighting. The Geneva-based group says an IOM-chartered ship will remain off the coast of Tripoli "until security conditions have improved and the safety of staff and migrants can be guaranteed."

The rebels have sent reinforcements to the city from the north, south and southeast, and a rebel field commander said Monday that more than 4,000 fighters were part of the final push to bring down the regime. Rebels manned checkpoints on the western approaches to the city Monday, handing out candy to motorists and inquiring about their destinations.

Around midday Monday, rebel fighters took over a women's police college near the Mediterranean and declared that they would set up their new headquarters there.

But the rebels' optimistic mood of the morning quickly changed. By mid-afternoon, the college came under heavy fire. Snipers from nearby high-rises aimed at motorists speeding by. An anti-aircraft gun pounded the compound, creating a deafening noise. A handful of rebel fighters inside seemed jumpy and unsure what to do.

Gadhafi loyalists also launched attacks in two other areas of Tripoli, said Ashraf Hussein, a rebel fighter who sat pressed against an inner wall of the compound for safety.

Still, revelers flocked to Green Square, the symbolic heart of the fading Gadhafi regime that fell under rebel control late Sunday. They flashed the "V" for victory sign and motorists circled the plaza, honking horns and waving rebel flags.

Outside of Tripoli, almost all of eastern and western Libya is now under rebel control. The east of the country from the Egyptian border to Benghazi fell into rebel hands at the beginning of the uprising. In the weeks leading up to Sunday's lightning advance on Tripoli, the rebels consolidated control of the western Nafusa mountain range near the border with Tunisia. It was from there they staged the run on the capital. Most of the rest of the country was quickly falling into their hands.

The city of Sirte, Gadhafi's hometown to the east of Tripoli, was the most important loyalist bastion to remain fully under his control.

On Monday, the city was without power and full of heavily guarded Gadhafi checkpoints, said Hassan al-Daroui, an official with the rebel council in Benghazi who was in touch with people there by satellite phone. Many people there were not even aware that rebels had pushed into the capital, 250 miles (400 kilometers) to the northwest, he said.

On Saturday rebels said they gained control of the oil refineries and airport at the oil terminal of Brega, on the road heading out of Benghazi west toward Tripoli.

The rebels' startling breakthrough on Sunday, after a long deadlock in Libya's 6-month-old civil war, was the culmination of a closely coordinated plan by rebels, NATO and anti-Gadhafi residents inside Tripoli, rebel leaders said.

Associated Press writer Mike Corder at The Hague, Netherlands, contributed to this report.