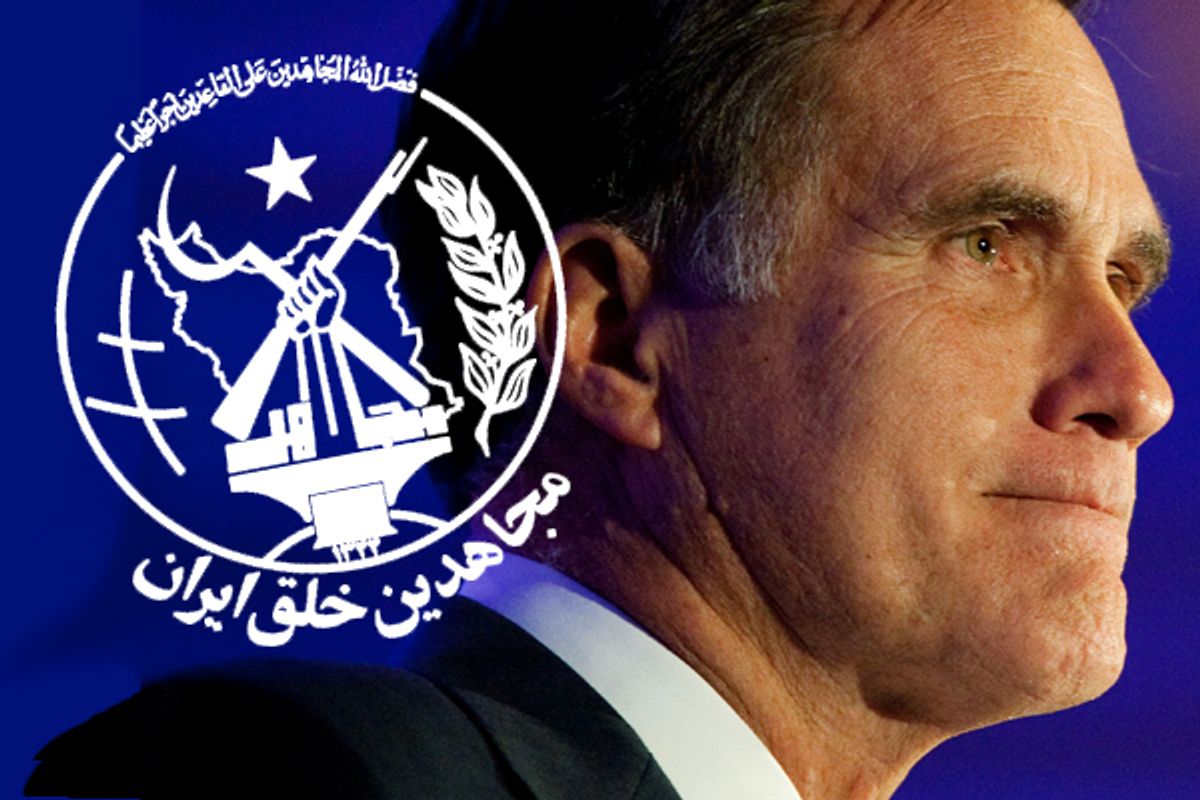 A foreign policy advisor to Republican presidential candidate Mitt Romney has been active in recent months in an advocacy campaign to rehabilitate the reputation of an underground organization in Iran known as the Mujahedin-e Khalq. The MEK has been designated by the U.S. State Department as a "terrorist" organization.

Currently president of Washington College in Maryland, Reiss has played a leading role in an ongoing campaign to get the MEK removed from the U.S. government's official list of foreign organizations said to be involved in terrorism. Inclusion on the State Department list has far-reaching legal consequences -- including making it illegal for U.S. citizens to support or even join the group.

"[T]he U.S. State Department needs to delist the MEK immediately," Reiss said at a pro-MEK conference in Washington in April, where he was joined by a group of other luminaries, some of whom have acknowledged being paid to appear.

"Time is running out, lives are at stake," he declared. "For the United States this is a case where American interests of opposing the regime in Tehran are entirely consistent with American values of freedom and democracy."

In January he spoke at a conference organized by ExecutiveAction, a D.C.-based "problem solving company" that has spearheaded the campaign to delist the MEK. He also moderated a second, similar MEK event in April at the Capital Hilton in Washington and moderated yet another in July at the Willard Intercontinental Hotel.

The MEK qualified for the State Department list because of its attacks on Iranian civilian targets beginning in the 1970s.

The Obama administration, which has engaged in complex negotiations with the Iranians over their nuclear aspirations, is being pressured to "delist" the MEK by those who say this would help undermine the Iranian regime, which is seen as a threat to Israel, a U.S. ally.

"With one simple signature, the Obama administration can help empower Iranians to seize control over their destiny — and perhaps end the mullahs' mad nuclear dash," wrote Daniel Pipes in National Review last month.

Romney has not taken a public position on the MEK, but he has previously spoken about Iran in aggressive terms.

"The Iranian regime is unalloyed evil, run by people who are at once ruthless and fanatical," he told an American-Israel Public Affairs Committee (AIPAC) summit in San Diego in 2009. "Stop thinking that a charm offensive will talk the Iranians out of their pursuit of nuclear weapons."

The MEK follows a philosophy that mixes Marxism and Islam, according to the State Department. The group, led by a husband-and-wife duo, Maryam and Massoud Rajavi, has been criticized for its "cult-like" qualities. It killed several Americans in Iran in the 1970s, including the deputy chief of the U.S. Military Mission in Tehran and two civilian employees of Rockwell International, a manufacturing conglomerate.

As recently as 2000, according to the State Department, the MEK launched attacks on Iranian government and civilian targets. The MEK says it renounced terrorism in 2001. (More on its tangled history here.)

In the past year or so, MEK supporters have mounted an intense public relations campaign fueled by millions of dollars of money, the sources of which are difficult to identify. A decision from the administration in an ongoing review of MEK's terrorist designation is expected soon, according to State Department watchers.

The Obama administration, like the Bush administration before it, has not been moved by the MEK's public relations efforts so far.

But Washington's most agile gladhanders have noticed that the MEK is nothing if not generous. Former Pennsylvania Gov. Ed Rendell, a Democrat with little foreign policy experience outside the state of Pennsylvania, was paid $20,000 for a 10-minute speech in which he said, "This has been a terrific learning experience for me, someone who knew practically nothing about the issues."

Gen. Anthony Zinni, retired, a liberal-minded general and an early Iraq war critic, was paid his "standard speaking fee" -- $20,000 to $30,000 -- for an eight-minute speech at an MEK-linked conference. “I am shocked and surprised that we still chase this illusion that there can be a meaningful dialogue with the regime," Zinni said at the January event.

Other politicos advocating for the MEK include liberal Democrats Howard Dean and Bill Bradley.

All of this raises the question of what, if anything, Reiss -- an advisor to a major presidential candidate -- has been paid for his MEK advocacy, and where that money is coming from. Funds for the pro-MEK campaign have come from "a fluid and enigmatic network of support groups based in the United States," says the Huffington Post, citing an unnamed MEK leader. Reiss and the Romney campaign did not return phone calls seeking comment.

Reiss is a veteran policymaker. The author of "Negotiating With Evil: When to Talk to Terrorists" and two books about nuclear nonproliferation, he also served as George W. Bush's special envoy for the Northern Ireland peace process.

Here is a video of Reiss at one of the pro-MEK conferences in April:

And here are his opening remarks at the July event: