How to make Sarah Palin disappear

If you want her to just go away, you should probably be hoping she decides to run for president 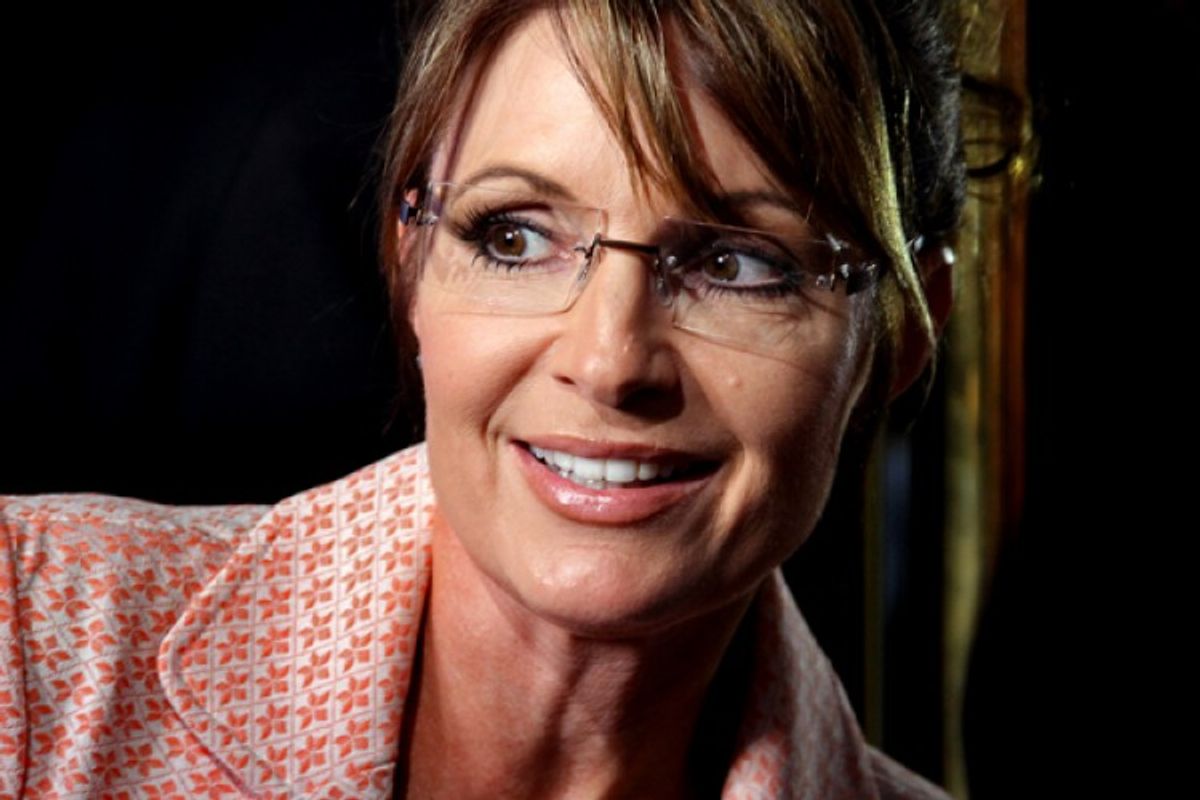 The safe bet remains that Sarah Palin is simply engaged in a long and tiresome tease. Every few weeks comes some new sign of her supposedly imminent entry into the GOP presidential race, but nothing ever seems to happen.

For the latest flurry of speculation, we can thank Karl Rove, who used several television appearances last weekend to argue that "I think she gets in" and to suggest that Palin's scheduled appearance at a Sept. 3 Tea Party event in Iowa might double as a campaign launch. Like each one that's come before it, chances are that this eruption will soon die down without amounting to anything. Rove may just have been trying to spoil the campaign rollout of his old nemesis, Rick Perry, and Palin is now tamping down the speculation.

Why? Because a presidential campaign would almost certainly end in defeat for Palin. And not just any kind of defeat -- epic, humiliating defeat, the sort of disaster that might once and for all convince the political and media worlds that the empress has no clothes.

Sure, when her name is included in GOP polling now, she fares well enough. A recent national survey conducted by CNN placed her in a tie for third at 12 percent, just 5 points behind Mitt Romney. And in an Iowa poll released a few days ago, she stood at 10 percent. These numbers are respectable enough, but they're mainly a product of Palin's celebrity, and there's no reason to suspect that they'd do anything but drop if she actually entered the race.

The main problem for Palin is how profoundly she's alienated the Republican Party's elites -- the elected officials, fundraisers, political professionals, activist group leaders and commentators who help shape mass opinion on the right -- since her 2008 vice presidential campaign. Instead of cultivating them and seeking to use her newfound celebrity to build a genuine national political operation, she pushed them all away, preferring to chart her own erratic course. The result has been a public relations nightmare. Relying on her own instincts, Palin has found herself in one needless, self-induced and no-win controversy after another, with virtually no opinion-shaping elites using their clout to defend her. This was best illustrated in the aftermath of the Gabrielle Giffords shooting in January, which influential conservative commentators took as an opportunity to inflict serious political damage on Palin.

Palin is now saddled with a truly poisonous level of unpopularity among all voters who aren't conservative Republicans. And even within that group, her image isn't what it used to be. If she were to mount a campaign, she would be entirely on her own, just like she has been since 2008, and that's a recipe for disaster.

This is why I've previously likened a potential Palin bid to the post-scandal presidential campaign that Democrat Gary Hart waged in 1988. Hart had emerged from his near-miss race against Walter Mondale in 1984 as one of the most popular politicians in the country and the clear front-runner for his party's '88 nomination, only to drop out in early 1987 after a sex scandal. But as '87 wore on, Hart came to regret his hasty decision, sensed an opening, and returned to the race just before Christmas. It was treated as huge news, just as any Palin announcement now would be, and polls initially showed Hart in contention.

But it was a mirage. The scandal had wrecked Hart's standing with his own party's elites, and his own unfavorable rating with Democratic voters had more than doubled since his spring exit. Hart was left to run a campaign without much formal organization, relying on his celebrity and ability to attract press coverage.

When he reentered the race, a poll put him at 34 percent in Iowa, good for first place. But a month later, on the eve of the first-in-the-nation caucuses, he was down to 13 percent. In the actual caucuses, he ended up receiving less than 1 percent. A week later, he finished with 4 percent in New Hampshire -- the same state where he'd won with nearly 40 percent in the 1984 primary. He carried on for a few more weeks, but it was pointless: Hart was relying on media coverage, which had been so easy to generate throughout 1987, but the gruesome Iowa and New Hampshire results prompted the press to treat him like a dead man.

This is about what we could expect from a Palin campaign. If she jumped in, polls would initially show her in contention, but she'd be running a structure- and discipline-free campaign with no support from GOP opinion-shapers and on a message that really isn't unique. Republican voters who haven't yet figured it out would realize she's not a viable option and abandon her for a candidate who seems to have a better chance. If she were to then suffer humiliating defeats in Iowa and New Hampshire, Palin might suddenly find that the media isn't nearly as interested in her every tweet and Facebook post as it once was.

In other words, those who just want her to go away should consider a Palin presidential campaign an investment: You'd have to deal with a few weeks (or maybe even months) of saturation coverage, but there'd be a good chance it would all end with Palin's presence in our lives severely and permanently diminished.