Costa Rica's universal system has long been lauded. Now, it's on the verge of going broke 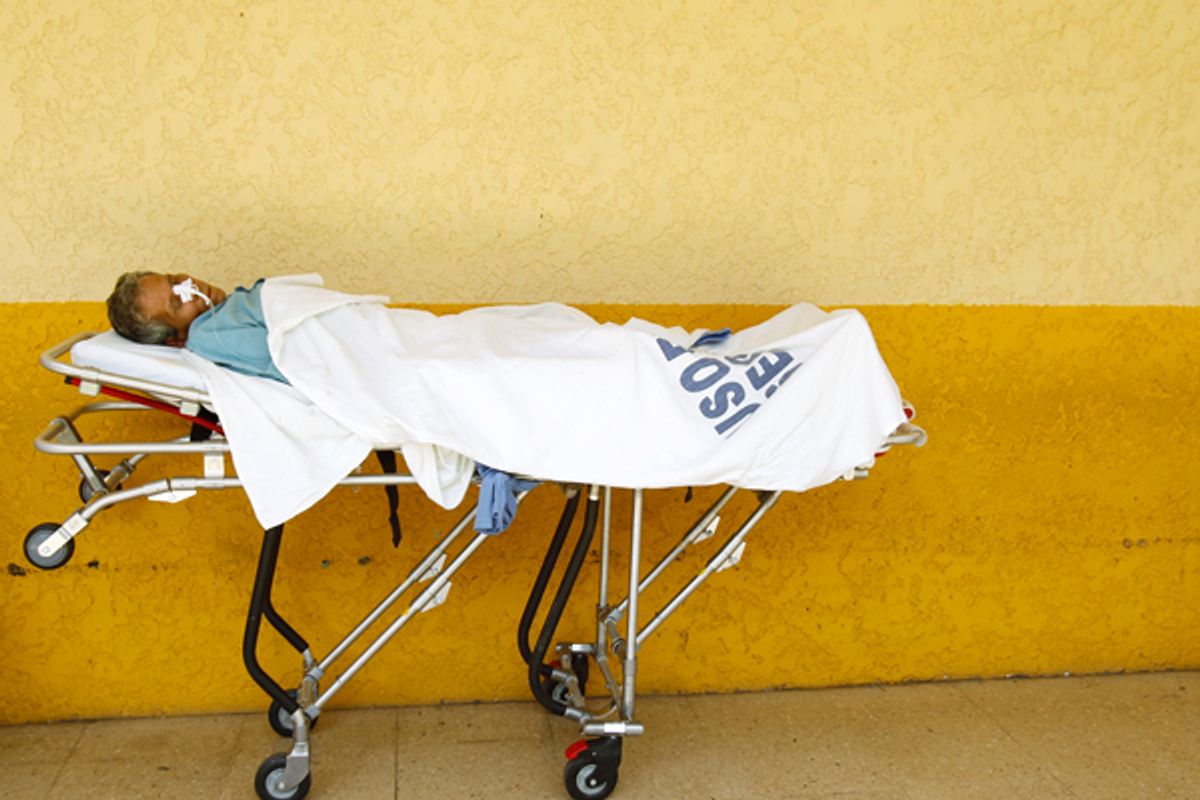 Limbaugh might have overlooked a couple of critical details: Costa Rica's respected universal healthcare system is highly socialized. It's also on the verge of going broke.

Costa Ricans credit health care with helping boost its life expectancy to 78.7 years -- on par with the richest countries in the world. Costa Rica's broad coverage ranked better than most of the Americas, including the United States, in a 2000 World Health Organization index.

Now, hobbled by mismanagement, the system has become overwhelmed by a burgeoning population that includes an increasing number of elderly and new immigrants who rely on the public system for care.

A damning report by the Pan American Health Organization, an international public health agency, found that Costa Rica's social security system, known as "la Caja," or savings bank in Spanish, spent greater sums than ever on health care even as service in public hospitals faltered.

Laura Chinchilla, Costa Rica's president, told television viewers last month in one of her most somber addresses that la Caja is on the brink of a "serious crisis."

"The [budget] shortage can no longer be covered by the current system, and any temporary solution will do nothing more than worsen the problem and the future situation of the institution," Chinchilla said.

The long queues sway patients with means to opt for faster care in private clinics, popular among throngs of "medical tourists" from the United States.

"If it's a little thing, it's better to go to a private doctor," said Susana Trejos, whose family grows fine coffee in the southern region of San Vito de Coto Brus.

But private health care prices are prohibitively high for most Costa Ricans, so they turn instead to la Caja.

To fund it, wage earners pay a little over 9 percent of their salary in social security tax. Their employer matches that with another 27 percent of each worker's salary, and the government pays into la Caja as well to help cover the poor.

Anyone in the country of about 4.6 million can fill a prescription at a public pharmacy or have an operation, all paid for by Caja insurance.

Now, Costa Rica's population is aging rapidly compared to the slowing birth rate -- with some enduring seniors living past 100.

Many elderly people live on meager state pensions, leaving them to rely on the state for their care. "This can cost a fortune, and it all keeps getting handed out with not a single charge," said Dr. Fernando Morales, director of the National Geriatric Hospital in San Jose.

Costa Rica's labor landscape has also changed, with larger numbers of migrant workers and freelancers that feed a thriving informal sector that now makes up an estimated 40 percent of the Costa Rican workforce, who all receive care from la Caja.

Health officials say that tax fraud is another major drain on the system. Some companies underreport staff salaries to snag a lower tax rate. In a crackdown in 2009, the authorities shuttered a soccer stadium just hours before a big game to force the team owners to cough up over $1 million in social-security back pay.

Much of the blame for la Caja's shortfall has fallen on previous managers. Under the former Caja chief's watch, the public health system hired thousands of new workers and hiked wages. Pay for sick leave and overtime also ran up the bills. Social-security revenue, meanwhile, failed to keep pace.

The accusations of mismanagement triggered a shakeup in the Chinchilla administration, causing the embattled president to lose top cabinet officials. Recently, the health minister stepped down, saying that she disagreed with the way the president has handled the crisis at la Caja.

Chinchilla has vowed to rescue the system, ordering cash injections and setting up a committee of Caja directors to draw up a report on suggested reforms. There's no word on when the report might be released, and it will take time to implement any changes it might suggest.

In the meantime, Hospital de Alajuela, the nearest public hospital to the capital's international airport, has slashed its emergency-room hours due to budget troubles. For now, it seems that deep reform is stuck in the waiting room.