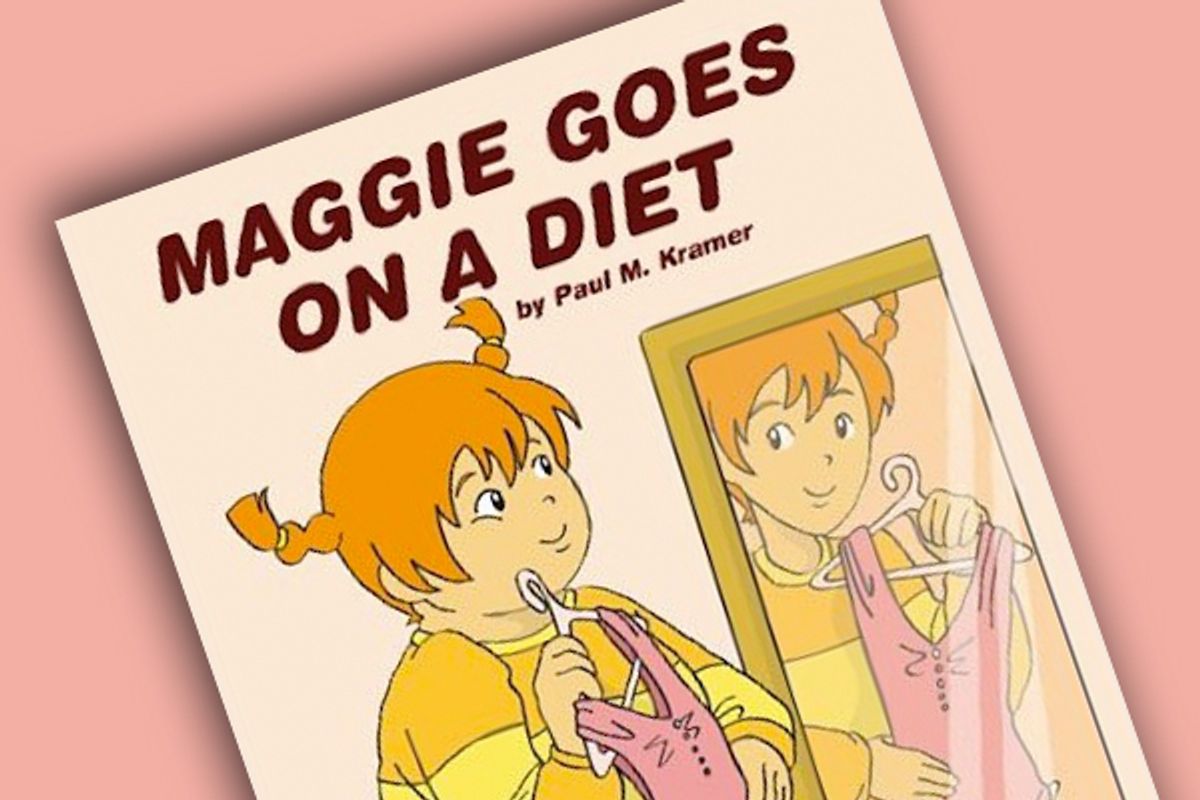 It's the kind of aspirational image familiar from women's magazines and yogurt ads -- a frumpy girl standing before the mirror, holding up the outfit she longs to fit into, dreaming of the smiling, slim version of herself waiting on the other side. But this isn't some Slim-Fast pitch or another Bikini Body by Friday! morning show segment. It's the cover of a children's book.

It won't even come out until October, but "Maggie Goes on a Diet" already has attracted more ferocious critics than the "Twilight" saga. The story of a plus-size 14-year-old "who goes on a diet and is transformed from being overweight and insecure to a normal-sized teen" -- and then a popular soccer star -- has Amazon members calling it "an abomination" and "revolting." Some people are even musing about whether it might trigger eating disorders in young readers. (The tale, told in verse, is aimed at ages 6 and up.)

Why would a little self-published book from the author of "Do Not Dread Wetting the Bed" and "Booger Bob" cause such a stir? Paul M. Kramer's not exactly Dr. Seuss, and if it weren't for the controversy, his book would likely have been all but ignored in the vast sea of children's titles out there. Instead, things have become so heated that Kramer has taken to the airwaves to defend himself. On "Good Morning America" earlier this week, he explained that Maggie "does want to look better. She does want to feel better and she does not want to be teased." He defended the book for tackling "the issues that kids face today."

Not everyone is outraged. Writing in a Los Angeles Times blog, Karen Kaplan argued that the ideas in the book "sound like the kind of sensible advice recommended by experts." Even Fox's usually hysterical Dr. Keith Ablow declared Maggie "a welcome truth-seeker" and added that "she's a fabulous role model ... far better than the size-20 women who go on talk shows and lie about how happy they are with their bodies." Just imagine! A size-20 woman truly being happy with herself!

Yet despite its somewhat dubious defenders, the book isn't a crash course in starvation for the sake of social acceptance -- it's about a girl who learns to make healthier eating choices and become more active. The harsh reality is that between 16 and 33 percent of American children and teens are obese -- a number that just keeps growing. And as it does, so does our national epidemic of heart disease, Type II diabetes and other weight-related health problems. So why wouldn't a book that promotes healthy lifestyle choices, and makes it clear that breaking old habits and getting fit take time and effort, be praised as a boon for kids, a way to open up the dialogue?

Maybe it's because the book, with its depiction of bullies teasing Maggie as a "fatty," and its images of the portly girl reaching into the refrigerator for consolation, looks like a wildly clumsy stab at empowerment. Much of the problem is right there on the book's cover. Maggie is conspicuously not depicted sweating through a soccer practice -- she's holding up a too-small pink dress.

And then there's the title. Perhaps Kramer, as a dude, is unfamiliar with the horrendous psychic weight that one word, "diet," carries for so many females. According to information from Duke University, almost 40 percent of American girls ages 9 and 10 are now or have been on a diet. The U.S. Department of Health and Human Services says that eating disorders in children under 12 have risen 119 percent in the past decade. By the time many girls reach Maggie's age of 14 and well beyond, they associate the word with self-punishment and with failure. A Self magazine study three years ago revealed that three out of four American women have disordered attitudes around food, and a whopping 67 percent say they're trying to lose weight. That's why I was frankly delighted today when my 7-year-old saw the book cover today and asked, "What's a diet?" My 11-year-old, meanwhile, declared, "That looks lame." Word.

It's possible to write honestly and competently about weighty issues -- even for kids. There's the always terrific Marc and Laurie Krasny Brown's "Dinosaurs Alive and Well!: A Guide to Good Health," or Harriet Ziefert's "Murphy Meets the Treadmill," for starters. But healthy habits and attitudes in young children don't include fat shaming. And while childhood obesity can lead to serious adult health struggles, destructive attitudes can hurt just as deeply -- and linger just as long.