"Don't Be Afraid of the Dark": Voices in the basement 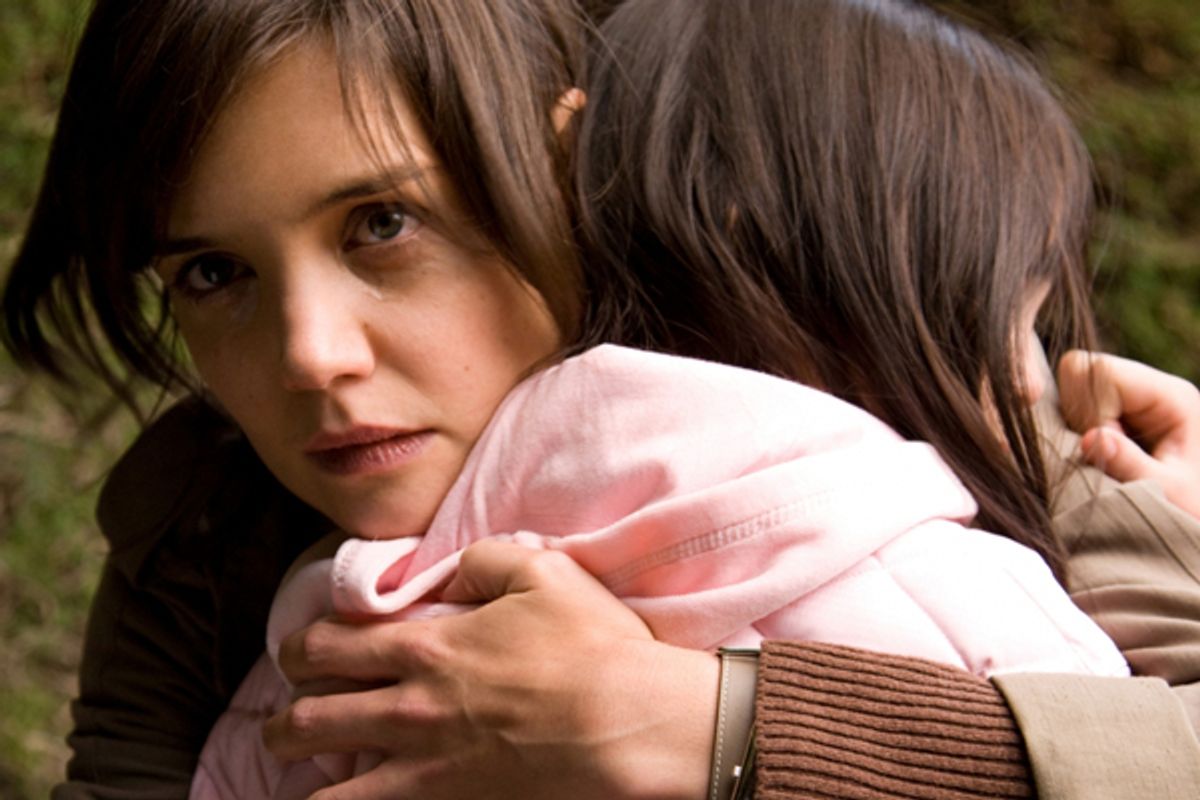 Katie Holmes and Bailee Madison in "Don't Be Afraid of the Dark."
--

Here is my brilliant considered opinion on the much-debated subject of horror-movie remakes: Usually they suck, but it all depends.

Movies in general serve as reflections of the collective unconscious, and horror movies perhaps most of all. As we've seen time and time again, removing them from their era -- transplanting "The Texas Chainsaw Massacre" from the paranoid early '70s, or "Nightmare on Elm Street" out of the Reagan years -- tends to rob them not merely of situational context, but their life and meaning as well. Maybe I'm venturing into a dubious mystical argument by suggesting that a work's value can come from extrinsic environmental factors beyond anyone's conscious control, but I think it's often true.

That may go some way toward explaining why "Don't Be Afraid of the Dark," a Guillermo del Toro-supervised remake of a legendary TV film that traumatized generations of 1970s and '80s viewers, is both better and worse than its source material. (Del Toro did not direct this movie, although he gets his name above the title; he's pulled in too many directions on 50 gazillion other projects to bother with that. He did produce and co-write the screenplay.) This is an above-average horror flick by any measure, nicely directed by del Toro protégé Troy Nixey in an atmospheric, unshowy style that recalls cheapo '70s cinema without mimicking it. If I didn't find this tale of an old, dark house infested by ancient and evil goblins exceptionally terrifying, that might be because I've seen the original and knew what would (probably) happen. Still, Nixey delivers numerous nasty shocks and an overriding sense of menace, and if the premise is new to you this movie will do more than enough to give you nightmares.

While the 1973 original had laughably bad special effects -- I seriously think those goblins were stop-motion apple dolls -- hammy acting from Kim Darby as the haunted housewife and Jim Hutton as the clueless husband, and a script full of clunky devices, it also had a clarity and a simplicity that were irresistible. The little monsters from the dark Freudian sub-basement tell Darby what they're going to do and then do it; nobody is watching and nobody believes her, except us. It was a fable of almost Kafkaesque intensity, a story in which all the hope in the universe dwindles down to a single flashlight beam and then goes out. Without consciously intending to, it engaged all sorts of proto-feminist fears and anxieties about the changing roles of women and the ways they are so often victimized or go unheard.

In the Nixey-del Toro version, the central couple, Kim and Alex, are played by Katie Holmes and Guy Pearce, two much stronger actors. But the monstrous homunculi aren't focused on either of them but on a vulnerable child named Sally (Bailee Madison), who is Alex's daughter by an off-screen ex-wife. Sally takes ADHD medication and is evidently screwed up in other ways, which both introduces a lot of half-relevant, pseudo-contemporary emotional drama and creates a somewhat hackneyed red herring: When Kim's best dresses are mysteriously torn to shreds, she and Alex pull long faces and drag Sally to the shrink for some serious intervention. "Sure, honey, little monsters from inside the heating ducts did it. Uh huh. Now take your powerful psychoactive drugs and go to bed."

Not only does the husband-wife dichotomy of the original film become a stepmother-stepdaughter triangle, but the screenplay (by del Toro and Matthew Robbins) introduces a whole lot of mythological and folkloric back story that simply isn't necessary. Oh, I can see the appeal of dragging in Celtic legends about the "little people" and the tooth-fairy tradition and secret treaties signed with supernatural entities by medieval popes, and it almost feels as if del Toro wishes they were making a different movie, a geeky "Da Vinci Code" horror-thriller that explored the secret history of goblin-human relations. I'd definitely watch that, but this one's supposed to be about the fact that our house is full of horrible little creatures who want to eat us and cannot be defeated. I'm not sure that juridical or political explanations for their behavior are all that helpful.

There's also a little bit of, say, "The Secret Garden" introduced into this remake, although one could just as well cite any of the dozens of books about a child alone in an old house. Sally arrives from L.A. to the crumbling Rhode Island mansion that architect Alex and helpmeet Kim are fixing up as a resale showpiece, and soon discovers not just the previously unknown basement room but the iron furnace grate someone has bolted shut and the local handyman doesn't want to talk about. Hmm, maybe it'd be fun to find some tools and open it up! Especially because the little voices down there say they want to come out and play! There are plenty of edge-of-your-seat, spooky-loo moments early in "Don't Be Afraid of the Dark," before Sally grasps the true nature of her new playmates, along with a few shriek-inducing ones later on.

There isn't much for Guy Pearce to do as the tone-deaf, perennially irritated dad, but Holmes -- whose acting is often overwhelmed by her Mrs. Tom Cruise fame -- delivers a sensitive performance as Kim gradually builds a tender, hesitant rapport with Sally. Still, there are problems with the characters and story here that the cast can't fix. It feels as if del Toro and Robbins never clearly chose between leaving the film in the cruel, manipulative horror idiom of the '70s -- in which telephones never work, cars never start, and minor coincidences and catastrophes keep the family inside the house long past the point when any ordinary idiot would have fled -- or uprooting it. So some of the knife-twisting later scenes in "Don't Be Afraid of the Dark" feel almost campy, like winks at the audience or studious self-referentiality. None of this is quite enough to ruin a gripping, gruesome fable, which of course del Toro's fans and other genre buffs will rush out to see, but it does render the movie a minor muddle rather than a horror masterwork.