Our airports ain't what they used to be

They've becoming painfully generic as classic, friendly buildings get replaced by structures with no identity 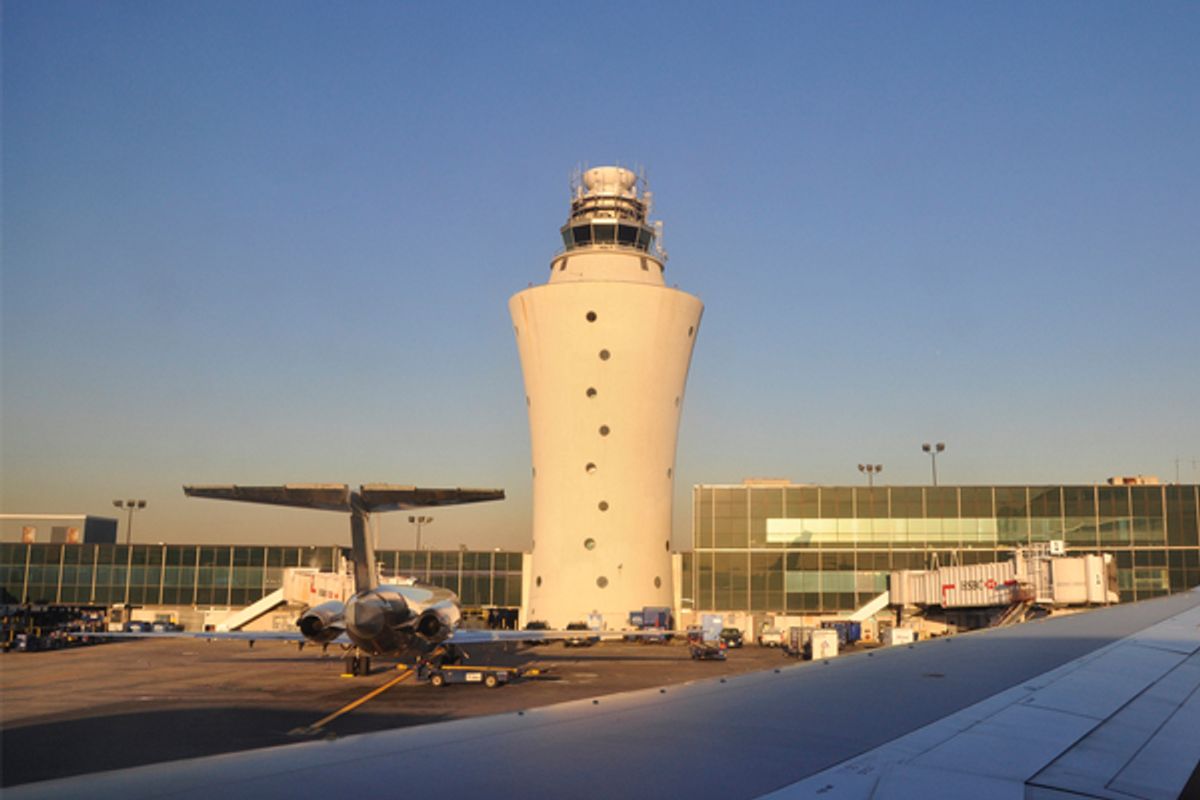 The 40-year-old control tower at LaGuardia.
--

Two classic American airport buildings are in the process of disappearing.

Over at New York's Kennedy airport, crews are laying waste to I.M. Pei's Terminal 6. I was there the other day, taking in the destruction from the elevated walkway between JetBlue and the JFK AirTrain. The gateside section has been annihilated, the earth turned inside-out to a depth of two stories, as if it took a direct hit from a couple of bunker busters. The main building, with its boxy rectangular rooftop and exterior glass walls, awaits the bulldozers.

The facility opened in 1970 as the home of National Airlines. It was called the "Sundrome" -- a nod to National's yellow and orange sunburst logo, and its popular routes between the Northeast and Florida. After National was folded into Pan Am, the terminal was taken over by TWA. It was later used by JetBlue, then abandoned when that carrier moved to the new (and much overrated) Terminal 5. It has been vacant since 2008.

If it's any consolation, right next door, enveloped by the JetBlue complex, Eero Saarinen's landmark TWA "Flight Center" still stands -- albeit in a state of restoration limbo. Saved from the wrecking ball in 2003, it was supposed to serve as an entryway lobby and ticketing plaza for JetBlue's T5. For now it remains semi-derelict and only partly renovated. I wish they'd finish the thing so that more people could appreciate what is arguably the most architecturally significant airport terminal in the world.

Pei and Saarinen, a half-minute walk from each other. Our airports ain't what they used to be.

Over on the north side of Queens, meanwhile, say goodbye to the 40-year-old control tower at LaGuardia. Frequent fliers remember this building well -- hourglass-shaped and of modest height, bejeweled with a top-to-bottom series of portholes. It was an odd, playful structure.

Nearby, at a cost of $100 million, stands its replacement. The new building is what you might call the FAA Standard Model A1 Control Tower -- a control tower that looks like every other American control tower put up over the past 20 or 30 years. I think they come prefab in a great big packing crate.

The old one is about halfway gone at last check, sheathed in a black debris screen, sans its top half. It looks like a decapitated tree trunk.

Airports, like the planes that serve them, have become painfully generic. Functionality aside, part of any major airport building's job is to create a sense of identity, inside and out -- the kind of place that, when you glimpse it on TV or in a movie, even for just a second, you know exactly where it is.

A dwindling number of airport facilities are distinctive in this way. The spidery "Theme Building" at LAX is the most enduring. The main terminal at Denver is another, as is the one at Washington-Dulles (Saarinen, again). And we shan't forget my sentimental favorite, the twin-stanchion control tower at Boston-Logan. (If only its 16th floor observation deck were still intact.)

Is there a reason, other than simple maintenance, they couldn't have left LaGuardia's porthole tower standing?

It may not have been state-of-the-art, but it was a welcoming, almost mischievous visual flourish in an otherwise joyless vista of seawater and concrete. It lent a friendly touch to an airport that, in most respects, is anything but friendly. It was, almost literally, an exclamation point. It said: LaGuardia!