The mainstream media takes a Will Smith rumor viral. Does anyone think twice before reposting a sloppy story? 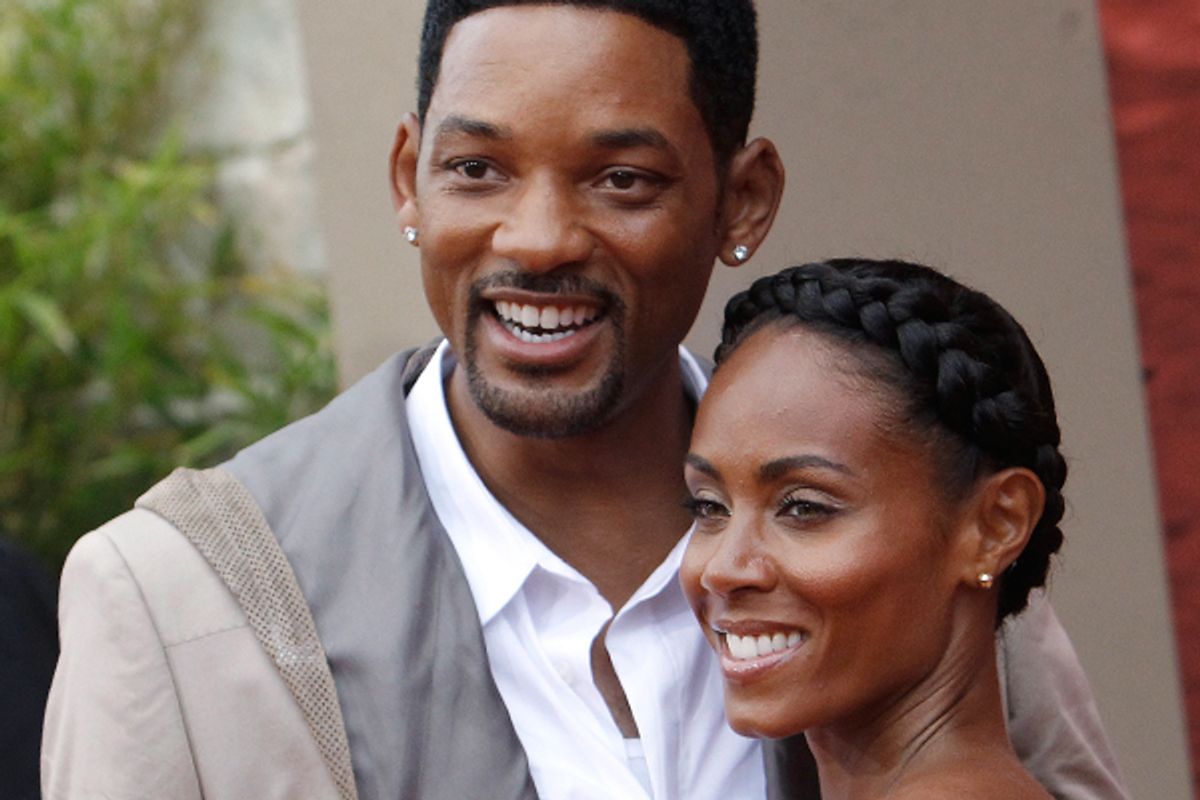 Will and Jada Pinkett Smith.
--

The supermarket tabloids -- they of the relentless Kardashian speculation and notorious overuse of exclamation points -- aren't exactly renowned as papers of record. Yet when no less an authority as In Touch decreed Tuesday morning that Hollywood golden couple Will and Jada Pinkett Smith were splitting up, that was good enough for media outlets who should have known better. Here's the exact quote: "After 13 years of marriage, Will Smith and Jada Pinkett Smith have decided to separate, an insider tells In Touch Weekly exclusively." Well, if an In Touch "insider" says so!

Sure enough, within minutes, the story gained better Internet traction than a Scott Baio death rumor -- greased by the Twitterverse but aided exponentially by considerably more mainstream sources. Yahoo's OMG gossip site promptly asked "Have Will Smith & Jada Pinkett Smith Split?" as did Chicago's Fox affiliate. The Daily News in New York also got around the sketchy sourcing by posing the story as a question in a piece on "Celebrity Ex Files." MSNBC also posted on the "report" of the split, and Jezebel went so far as to turn the report into a witty piece on "The Curse Of Bragging About Your Sex Life."

By the end of the day, the whole thing had gone kablooey, with the couple issuing a joint statement that "Although we are reluctant to respond to these types of press reports, the rumors circulating about our relationship are completely false. We are still together, and our marriage is intact." Cue a barrage of hasty retractions and updates -- the Huffington Post, in what might be a record number for a nonexistent story, racked up an impressive four of them.

You expect blatant rumor and innuendo from the tabloids. Earlier this month, In Touch ran a "Nanny tells all!" cover on "ice queen mom" Angelina Jolie -- that turned out to be about Jolie's own childhood caretaker. The Star recently announced that Kate Middleton was "95 pounds and having a baby!" According to the current Life & Style, "It's twins!" for Jennifer Aniston, who, according to In Touch, is "Hooked on Mr. Wrong."

So it isn't surprising that a celebrity couple would be dogged by magazine rumors of marital instability. And in a summer that's already seen the split of Jennifer Lopez and Marc Anthony -- who conveniently costars with Pinkett Smith on "Hawthorne" -- you can't expect the tabloids not to go for the obvious. The prospect of a big breakup for a duo who have been so famously -- nay, nauseatingly -- lovey-dovey for so long would be a juicy scoop. Isn't Smith the guy who in 2008 told Ellen DeGeneres, "Divorce is not an option"?

It's likewise to be expected that even the whiff of a rumor or a mere suggestion of scandal would take off like a rocket on Twitter. That's what Twitter's all about -- random musings and unconfirmed BS. But the Smith story also illuminates how utterly pathetic the mainstream media's mania for headlines has become. Just toss up any old dubious report, and if you're really butt-covering, tack a question mark at the end of it. You've got a story! It took Smith's son Trey to tamp down the story -- via Twitter, naturally -- with a declaration that it's "NOT TRUE AT ALL!!" before the wheels began to grind to a halt on this one. And before the Smiths issued their statement, Radar, apparently the new standard bearer of journalistic integrity, went all out and bothered to track down a family member -- anonymously, of course -- to deny the story.

Somewhere along the way, the notion of printing everything as truth and letting the retractions and corrections come later has become the new standard -- and not just for cheesy celebrity rags. Why? Because scandal means eyeballs, and everybody's competing for the lion's share. I used to think the terrifying thing about news is that it never stops coming. But now I think there's a far bigger problem. It's that sometimes it does stop. Sometimes, for whole minutes at a time, there isn't a damn thing to say. Nobody's breaking up. The sky is not falling. In the meantime, we have a relentless cycle of desperate headlines drumming up an insatiable appetite for something, anything to happen. A non-story becomes news. And more pointless effort is expended on fixing mistakes than getting the facts right in the first place.