Ultra-trashy "Colombiana" could be a future camp classic 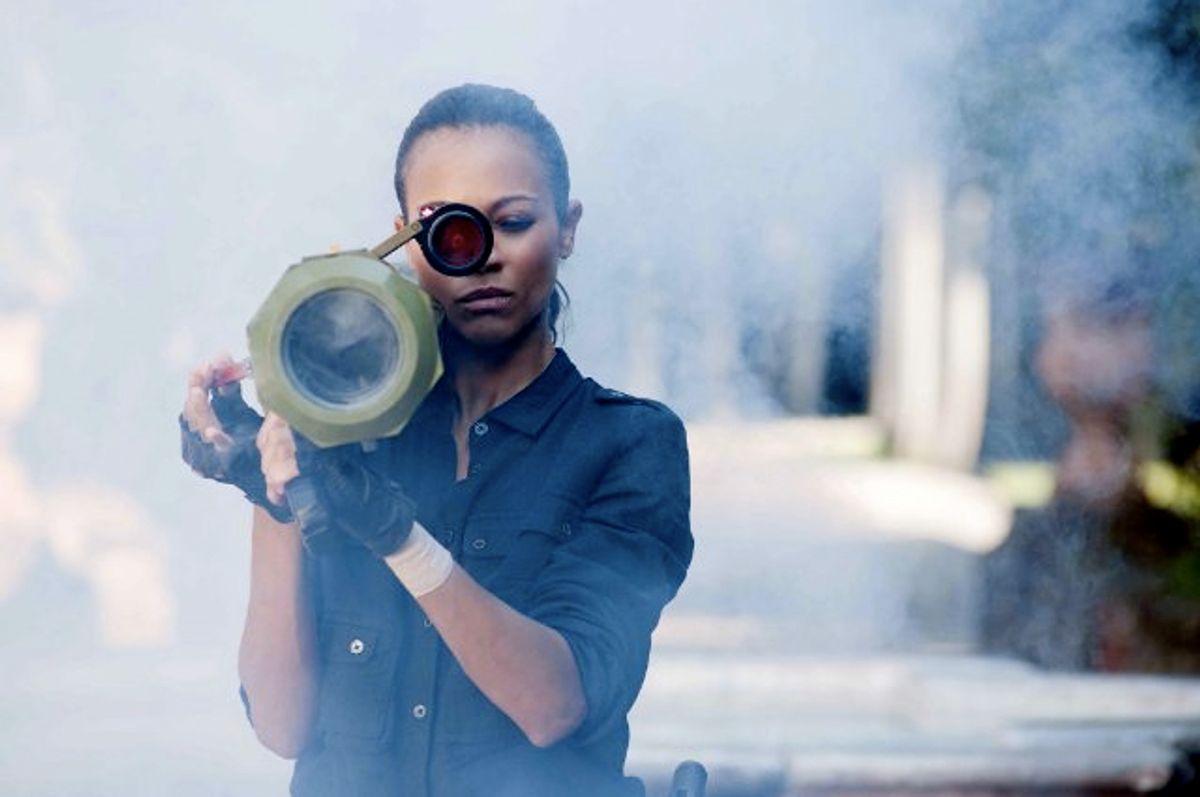 Apparently some people from Colombia are concerned that the new Zoe Saldana revenge thriller "Colombiana," which was largely shot in Mexico and the United States and features no Colombian actors, might depict their country as a land of gang violence, corruption and general lawlessness. An organization of "Colombian students and professionals" has described the film as "retarded." Hey, I know that's offensive! I didn't say it. But I have now seen "Colombiana," and I have a number of responses.

One is that if your whole damn country hadn't been a failed state for 20 years or so, you might not have idiots from France like producer/co-writer Luc Besson and director Olivier Megaton -- yeah, that's a put-on last name -- using it as a cheap pretext for a trashy and ridiculous blend of "La Femme Nikita," "Scarface" and "Fast Five." Another is that the beautiful and diverse sovereign nation of Colombia has bigger problems than a film that's built around repeated scenes of Zoe Saldana taking off her clothes and then putting them on again, although it's possible that some Colombians won't mind the distraction. A third is that the lack of realism and sensitivity in depicting Latin American life is way down the list of things wrong with "Colombiana," a movie so addicted to the crack pipe of delirious cinematic badness that it has real potential as a camp classic. For the first two-thirds of the picture, the crowd at the New York press screening I attended simply suffered in silence; by the end, we were roaring with delight.

I can't overemphasize the Frenchness of "Colombiana"; it really explains everything, even if the movie is mainly in Tony Montana-style English, with the occasional Spanish phrase tossed in to seem authentic and convincing (which somehow results in precisely the opposite effect). Now, normally when people talk about French cinema they mean lots of sex and intellectual chitchat and arty formalism, but the Dark Side of French cinephilia has always been its worshipful, masturbatory attitude toward Hollywood movies, something that's never existed among the American educated classes. Both as a director and, more recently, as a writer, producer and all-around impresario, Besson is a leading figure in this tradition, making high-gloss genre films where style is everything: text, subtext, context, pretext, you name it.

"Colombiana" is like a brain-damaged or attention-disordered imitation of a Michael Bay or Justin Lin or Tony Scott movie, one in which all the things that make them terrible -- incoherent action scenes, hyperactive editing, overly intense and unmotivated acting, chains of implausible coincidence -- are studiously embraced. Can we really claim it's an accident or a mistake that Besson and Megaton cast Cliff Curtis, an actor from New Zealand, to play a Latino crime lord in Chicago? Or that every time we see the front page of a newspaper, it's written in garbled Franglais and riddled with typos? At times, "Colombiana" reminded me more than a little of Guy Ritchie's much-maligned 2005 "Revolver," which takes place in an intentionally fake "Matrix"-style crime-movie universe. And, people, I had that thought before I Googled back to that movie and realized that Ritchie's co-writer was none other than -- Luc Besson. Hmmm! ("Revolver" also starred Jason Statham, a friend and frequent collaborator of both filmmakers.)

Do you really want me to tell you more about this movie? I was kind of hoping we could skip that part. Well, it starts with a chase through the streets of Bogotá with a bunch of armed hoodlums trying to hunt down an adorable uniformed schoolgirl. Apparently that sort of thing happens every day, in Colombia. See, this little girl is named Cataleya, after a famous species of Colombian orchid, and these guys have killed her father for some kind of Colombian drug-war reason, and she's got to run away to Chicago and grow up to become Zoe Saldana, mistress of disguise (and especially of the clothes-taking-off part), and kill lots and lots and lots of people who have absolutely nothing to do with the murder of her father. As the growly, hard-bitten FBI agent played by Lennie James observes, she's sending someone a message through all this indiscriminate mayhem, but he's not sure who.

Neither am I, actually, nor am I sure what the message is, beyond "Whoa! I'm a badass!" But the whole thing is photographed (by cinematographer Romain Lacourbas) in lustrous widescreen beer-and-tourism colors, and enlivened by a bunch of hammy, weird supporting performances: handsome Spanish actor Jordi Mollà as a stringy-haired mob enforcer, former "Alias" star Michael Vartan as Cataleya's pretty-boy artist squeeze, former "Smallville" star Callum Blue as a slimy CIA agent. What can I say about Saldana's acting that's not just mean? She's impossibly long and leggy; she looks great both at rest and in motion, and we get to see her feed a fat guy who's supposed to remind us of Bernie Madoff to some sharks. Hey, by the time she attacks a New Orleans mansion with an RPG launcher and some trained dogs I was having a great time in her company. And at least she didn't have to do this whole movie painted blue.