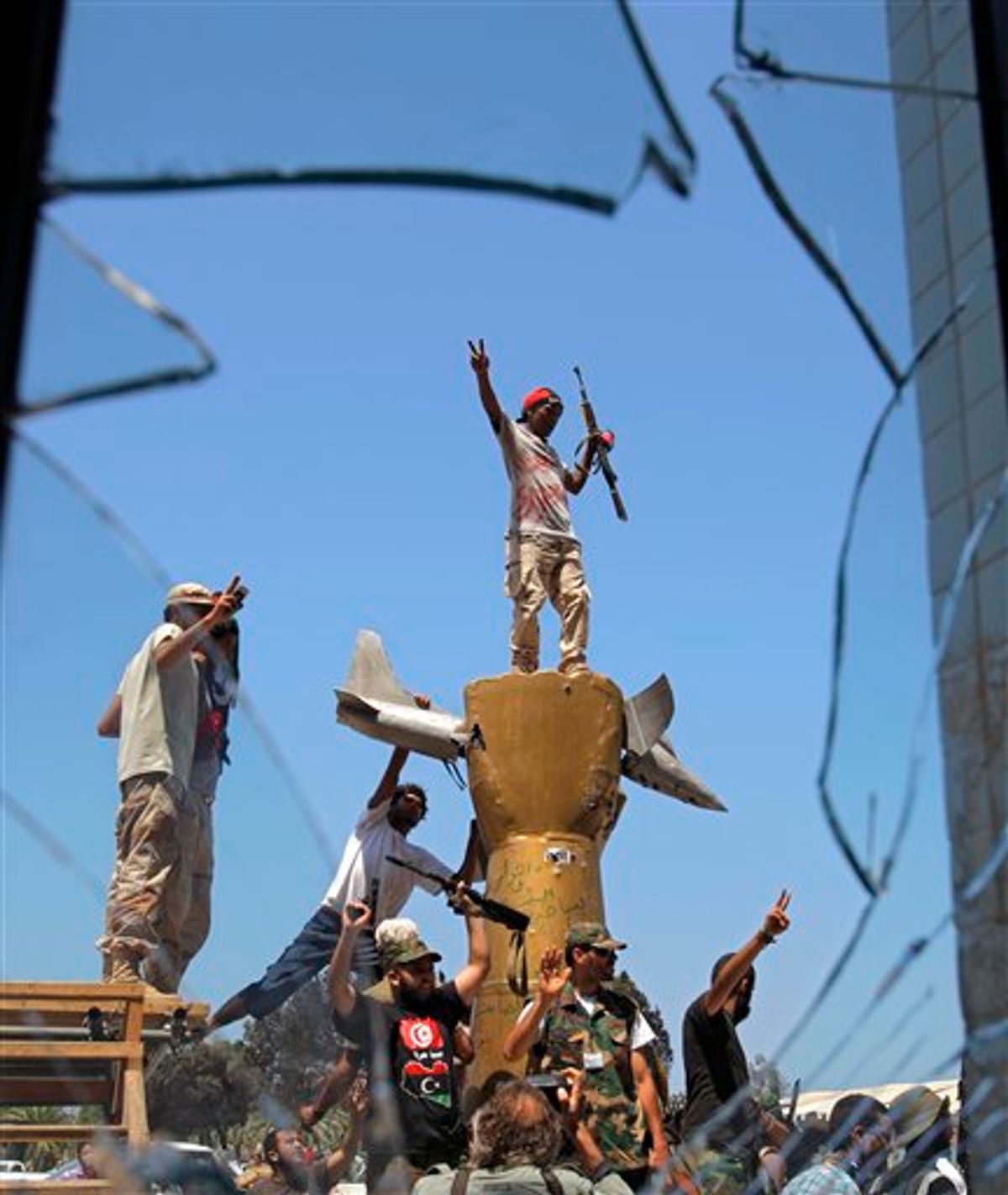 Rebel fighters celebrate as they stand on top of the monument inside the main Moammar Gadhafi compound in Bab Al-Aziziya in Tripoli, LIbya, Wednesday, Aug. 24, 2011. The rebels say they have now taken control of nearly all of Tripoli, but sporadic gunfire could still be heard Wednesday, and Gadhafi loyalists fired shells and assault rifles at fighters who had captured the Libyan leader's personal compound one day earlier. (AP Photo/Sergey Ponomarev) (AP)
--

Libyan rebels battled forces loyal to Moammar Gadhafi in the east Thursday and faced stubborn resistance in the capital as the opposition moved to assert control over the oil-rich country even as the longtime dictator remained at large.

The rebels have seized control of much of Tripoli as Gadhafi's 42-year regime crumbled, but the autocrat has refused to surrender and vowed from hiding to fight on "until victory or martyrdom."

The rebel leadership has offered a $2 million bounty on Gadhafi's head, and British Defense Secretary Liam Fox said Thursday that NATO was helping in the search for the maverick leader.

Fox said NATO was "providing intelligence and reconnaissance assets to help in the hunt," and had been heavily active in carrying out overnight airstrikes against Gadhafi loyalists, but refused to say if British special forces were involved.

Rebels say one of their key targets now is Gadhafi's hometown of Sirte, about 250 miles (400 kilometers) from Tripoli, but acknowledged that capturing that city would not be easy because Gadhafi's fellow tribesmen were expected to put up a fierce fight. Opposition leaders have said they were trying to negotiate a peaceful surrender of the city.

Fawzi Abu Ketf, deputy defense minister of the rebel National Transitional Council, said another challenge was the need to supply troops at the front. "The supply lines will be too long and we are short of funds and supplies," he said.

Gadhafi loyalists also had ambushed rebels advancing toward the town of Bin Jawad, some 350 miles (560 kilometers) southeast of Tripoli, killing at least 20 of them.

Wednesday's attack was carried out by pro-Gadhafi forces who had hastily retreated from the oil city of Ras Lanouf after rebels captured that city earlier this week, said Ahmed Zeleity, a rebel commander.

The ambush showed that pro-regime forces retain the ability to strike back even as the rebels tighten their control over the nation's capital.

Abu Ketf said fighting was raging Thursday outside Bin Jawad, but he had no details.

Rebels also have seized several parts of Sebha, another Gadhafi stronghold still holding out, including the main commercial Gamal Abdel-Nasser street, according to the NTC's Adel al-Zintani, who is in daily telephone contact with rebel commanders in the desert city, 400 miles (650 kilometers) south of Tripoli.

He said mercenaries from sub-Saharan African nations who had been paid by Gadhafi have fled the city, but loyal soldiers were continuing to hold firm.

The humanitarian situation is bad with lengthy power and water outages, he said.

In search of funds, the head of Libya's rebel Cabinet was meeting Thursday with Italian Premier Silvio Berlusconi, his second stop on a European tour aimed at securing the release of billions of dollars in frozen Libyan assets.

Mahmoud Jibril meets Berlusconi in Milan after laying out plans in Paris for governing Libya after the collapse of Gadhafi's 42-year regime.

The U.N. Security Council, meanwhile, is preparing to vote this week on a resolution that would release $1.5 billion in Libyan assets in U.S. banks that the world body froze to thwart Gadhafi. Analysts estimate as much as $110 billion is frozen in banks worldwide.