The Keystone pipeline protests have galvanized the environmental community. Is the president listening? 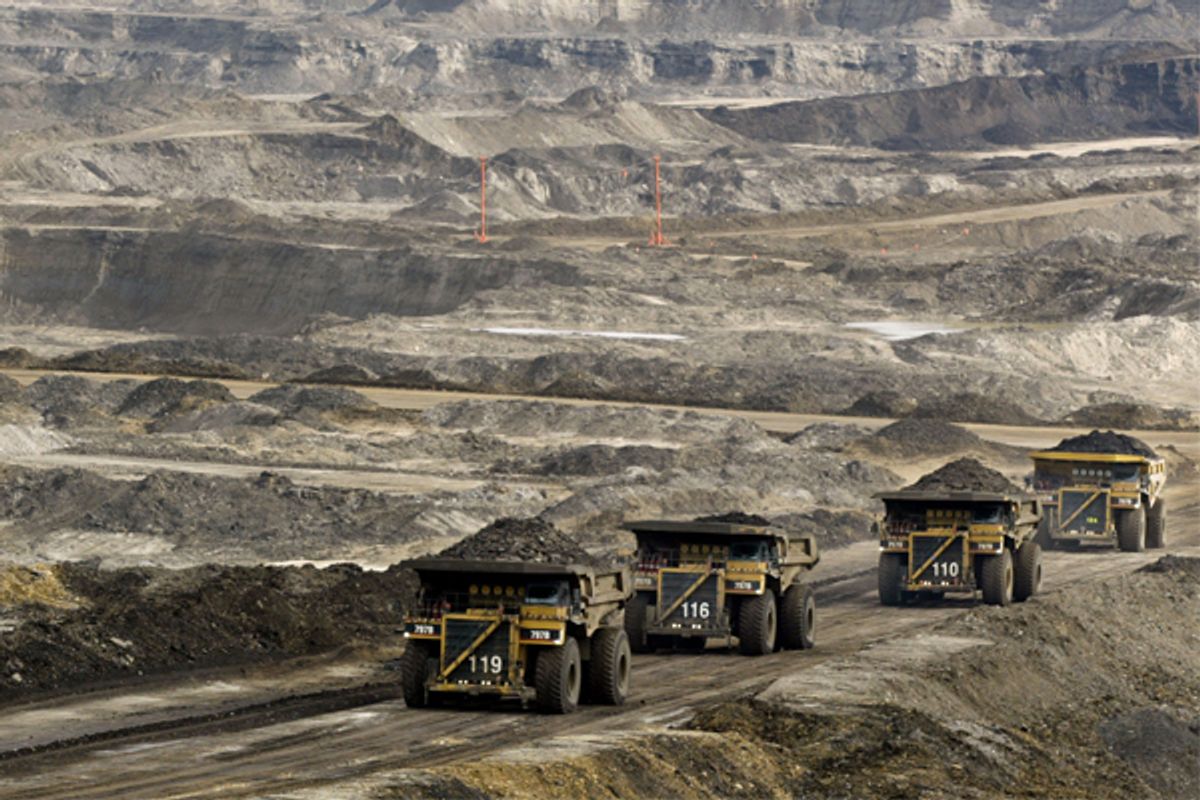 Sometime before the end of this year, the State Department will decide whether to approve the 1,700-mile-long Keystone XL pipeline, intended to connect the tar sands of Alberta, Canada, with the refineries of southern Texas. For many environmentalists, the fate of the world, literally, depends on the Obama administration's yea or nay.

"The Keystone Pipeline," wrote global warming activist Bill McKibben, in a letter urging concerned citizens to join a two-week protest in front of the White House, would be "a fuse to the biggest carbon bomb on the continent, a way to make it easier and faster to trigger the final overheating of our planet ..." In an essay titled "Silence Is Deadly," NASA climatologist James Hansen declared that if the tar sands are fully exploited for their oil deposits, "it is essentially game over" for the planet.

Hansen is sometimes criticized even by other environmentalists for the audacity of his rhetoric, but that doesn't mean he or McKibben is necessarily wrong. Extracting oil from tar sands is an expensive, massively environmentally destructive process that produces more greenhouse gases than the exploitation of conventional sources of oil. If the world continues down its current pell-mell path, avidly devouring dirtier and dirtier sources of fossil fuel, the amount of carbon dioxide in the earth's atmosphere will surely go far past the point of no return. The droughts currently plaguing exactly those regions where the southern end of the pipeline will stretch may one day be remembered fondly as an era of balmy weather.

So it has been inspiring to see how environmentalists have heeded McKibben's call to action. Each day this week, 50 or so protesters have linked arms in front of the White House and proudly waited their turn to get handcuffed and arrested, only to be replaced by a different 50 activists the next day. Their stories are invigorating. Environmental advocacy groups with a long history of squabbling with each other have joined together in an impressive display of unity. If Obama approves the Keystone Pipeline the backlash from the environmental community will be intense.

"We see this pipeline as the biggest environmental test President [Barack] Obama will have before the 2012 election," said Jamie Henn, a spokesman for jailed protest organizer Bill McKibben's group Tar Sands Action. "With the stroke of a pen, he'll be able to end a potential environmental disaster, stop the pipeline and electrify a base of support that hasn't been enthusiastic about his reelection."

Of course, at the same time, Obama will also be gift-wrapping his Republican opponents a handy bludgeon with which to clobber him on two of the most politically explosive issues likely to dominate the presidential campaign: jobs and gas prices. Big Labor wants the pipeline -- it's a "shovel-ready" project with plenty of union job potential. And even though gas prices are on the way down from recent peaks -- and both domestic oil and natural gas production have risen during Obama's presidency -- there's still nothing Michele Bachmann or Rick Perry or Mitt Romney would love better than to bash Obama for limiting U.S. access to oil from up North. Yes, any sane person understands that, no matter what Bachmann says, no U.S. president can meaningfully affect the price of oil unilaterally, but that doesn't make high energy prices any less potent as a campaign issue, as we learned in 2008.

Even worse, there's zero chance that Obama actually will be able to avoid a "potential environmental disaster," even if he directs Hillary Clinton to put the kibosh on the pipeline. Without a global commitment to a carbon tax or cap-and-trade regime that properly penalizes the production of greenhouse gases, the tar sands will be fully exploited. If the dirty oil doesn't end up in Texas refineries, it will go straight to China. (It may end up going to China anyway, but but that's a separate story.)

Unfortunately, there is no conceivable chance that any significant carbon-limiting legislation will come out of this U.S. Congress -- and even if Obama had thrown the full weight of his bully pulpit into the climate change battle before the 2010 midterms it is far from obvious that he could have gotten anything through the Senate even when Democrats had a 60-seat majority. Too many members of his own party had cold feet -- whether because of powerful energy-related special interests in their own states, or because of the dreadful condition of the U.S. economy.

Guess what? The economy is still dreadful, and that puts Obama, again, in a tough position. Despite the passion of Keystone protesters, the payoff for climate change activism at the ballot box is highly dubious. Voters are looking for action on jobs -- they may well question why the White House doesn't give the green light to a huge construction project, and instead makes what is fundamentally a symbolic gesture as far as restricting greenhouse gas emissions is concerned.

But at the same time, many voters have come to see Obama as a president unwilling to take strong stands. The Keystone Pipeline offers yet another test of this evolving consensus wisdom. Obama appointed a head of the EPA who has been willing to make tough decisions; maybe it is time he followed her lead. Because even though whatever he does, he won't be able to save the world -- there's still something to be said for saving your reputation.