Rick Perry is the biggest threat to Rick Perry

He's in first place now, but betting on the Texan tripping himself up may not be a bad idea 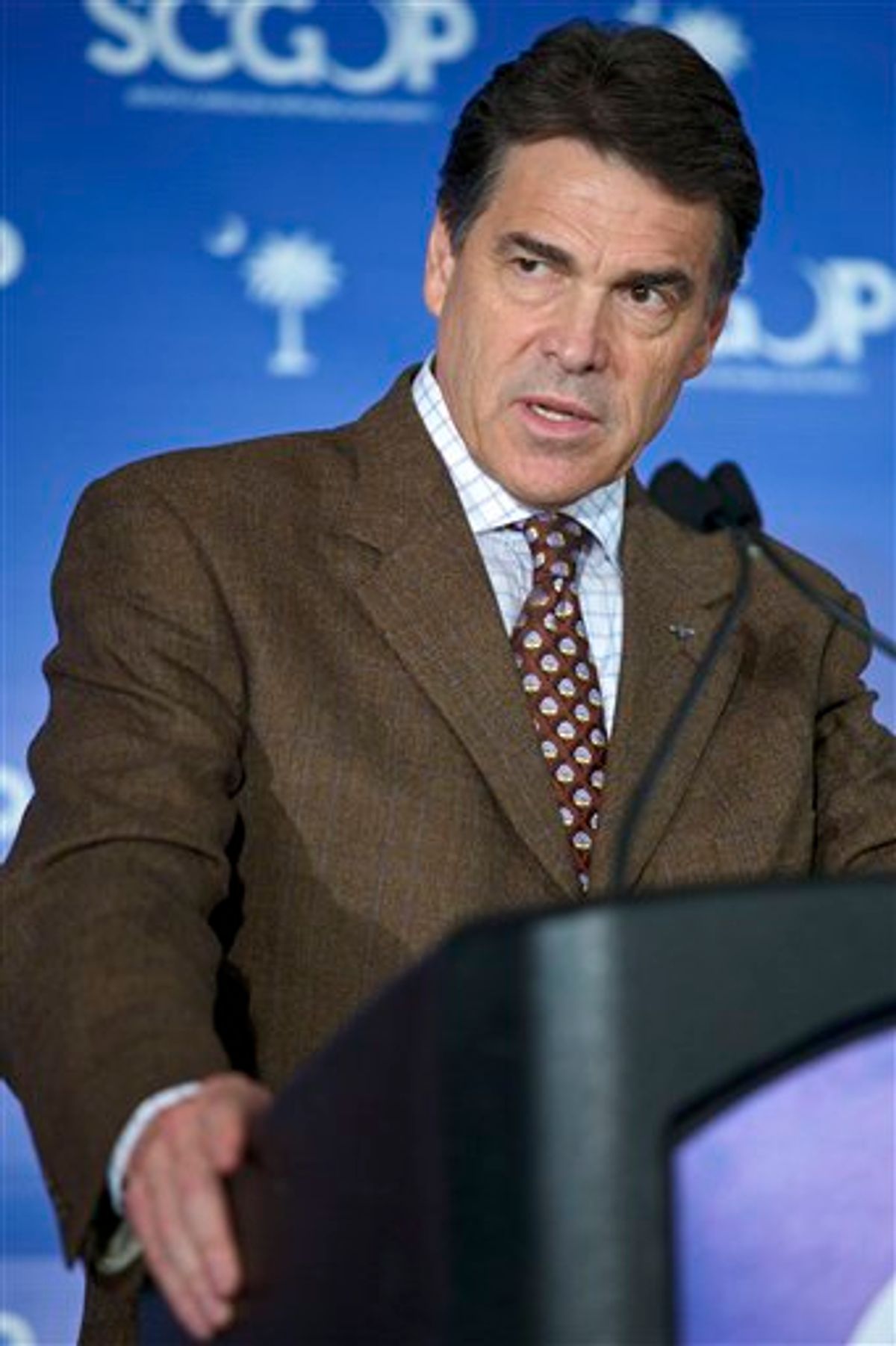 The good news for Rick Perry is that he is now clearly running in first place in the Republican presidential race, grabbing double-digit leads over Mitt Romney and the rest of the field in two new polls.

This is worth keeping mind, since there's an obvious temptation to regard the new data as proof that there's been a fundamental shift and that the long-anticipated fade-out of Romney has begun. "Bye, Mitt" was the headline of a post from TPM's Josh Marshall when the new data was released late Wednesday, and the first line of the Washington Post's write-up reads:

Maybe we'll end up looking back at this is the pivotal moment in the Republican race, when the swaggering Texan burst onto the scene, grabbed the lead, and never looked back. But it's just as plausible that these will end up being Rick Perry's glory days as a presidential candidate.

For one thing, the GOP race has been ridiculously fluid all year. This is actually not the first time Romney has fallen behind in polling. Back in the spring, CNN's survey showed him losing a third of his support in just a month and plummeting into a tie (with Newt Gingrich!) for fourth place, with just 11 percent of the vote. And a PPP poll around the same time put Romney in third place, 13 points behind the new leader. Granted, that leader was Donald Trump, who was never actually going to run, but the Trump saga was nonetheless instructive: When his polling support surged, the media's scrutiny increased and influential Republicans decided they'd had enough and sought to deflate the bubble. It worked. By the middle of May, Trump's support evaporated and he left the stage, and Romney made his way back to the lead.

Since then, we've seen several other surges and mini-surges. Herman Cain's performance in the first (and lightly-attended) GOP debate in South Carolina was a revelation to many Republicans, and his numbers in national polls and in Iowa both spiked, prompting serious people to speculate that he might actually have a chance of winning. But he was quickly eclipsed by Michele Bachmann, who stole the show at the second debate, rocketing her into double-digits in national polls, and the lead in Iowa. And now Bachmann's support is apparently ebbing as Perry takes charge.

This doesn't mean that Perry is just another fad candidate. He's more real than Trump, more formidable than Cain, and more established than Bachmann. But all he's really shown so far is that he's capable of doing exactly what they did: Delivering a message that stimulates the passions of a GOP base that has been itching to get excited about someone, anyone. This isn't really a revelation. We've known all along that Romney isn't the dream candidate of the Obama era Republican base, a fact that has made the race's fluidity possible. The question is whether Perry has staying power, and here there's good reason to be skeptical.

He's already done a fine job making his party's opinion-shaping elites nervous. And these elites -- elected officials, money-men and -women, interest group leaders, activists, and conservative media outlets and personalities -- will be key in determining whether Perry's moment lasts. If they conclude that nominating him would be an electoral risk, they will develop messages and strategies to convince rank-and-file GOP voters to look elsewhere. With Trump earlier this year, we caught a glimpse of how this works: His red-hot birtherism made elites uncomfortable and some of them used their clout to diminish him. We've also seen it with Sarah Palin: Think of how GOP elites happily joined the media's pile-on after her tone-deaf response to Gabrielle Giffords' shooting in January.

This ties in to the other problem Perry has: himself. In less than two weeks as a candidate, he's shown himself to be somewhat erratic and prone to intemperate utterances and antics. For now, he's something of a novelty, and he's mostly been able to get away with it. But that won't last. Every mistake he makes now will become instant fodder for cable news and the blogosphere, with the potential to dominate a news cycle or two. How will he handle one-on-one interviews with reporters? (Remember when George W. Bush flunked that world leaders pop quiz in the 2000 race -- how would something like that go over for Perry?) What about debates? What other controversies from his past will come to light? Perry could prove to be a surprisingly disciplined candidate, but based on his campaign rollout, there's reason to be doubtful.

And if he develops a reputation as a wild-man candidate (just imagine the SNL caricature), it will only make elites more nervous -- and more willing to use their sway to stop him. This is, more or less, the strategy that Romney has been banking on all along. He knows he's not going to win any early skirmishes for the hearts and minds of the base. But his bet is that when it comes time to make a call, the elites will decide he's the only solid general election option they have and help sell him to the base. This is roughly the same route that John Kerry followed on the Democratic side in 2004, when he won the nomination after falling behind -- far, far behind -- Howard Dean in the late months of 2003.

Of course, 2012 is a different year and, obviously, the GOP is a very different party. But Rick Perry still has an awful lot to prove before he can really earn the title "front-runner."