Rick Perry's stolen her thunder for now, but she could easily get the last laugh 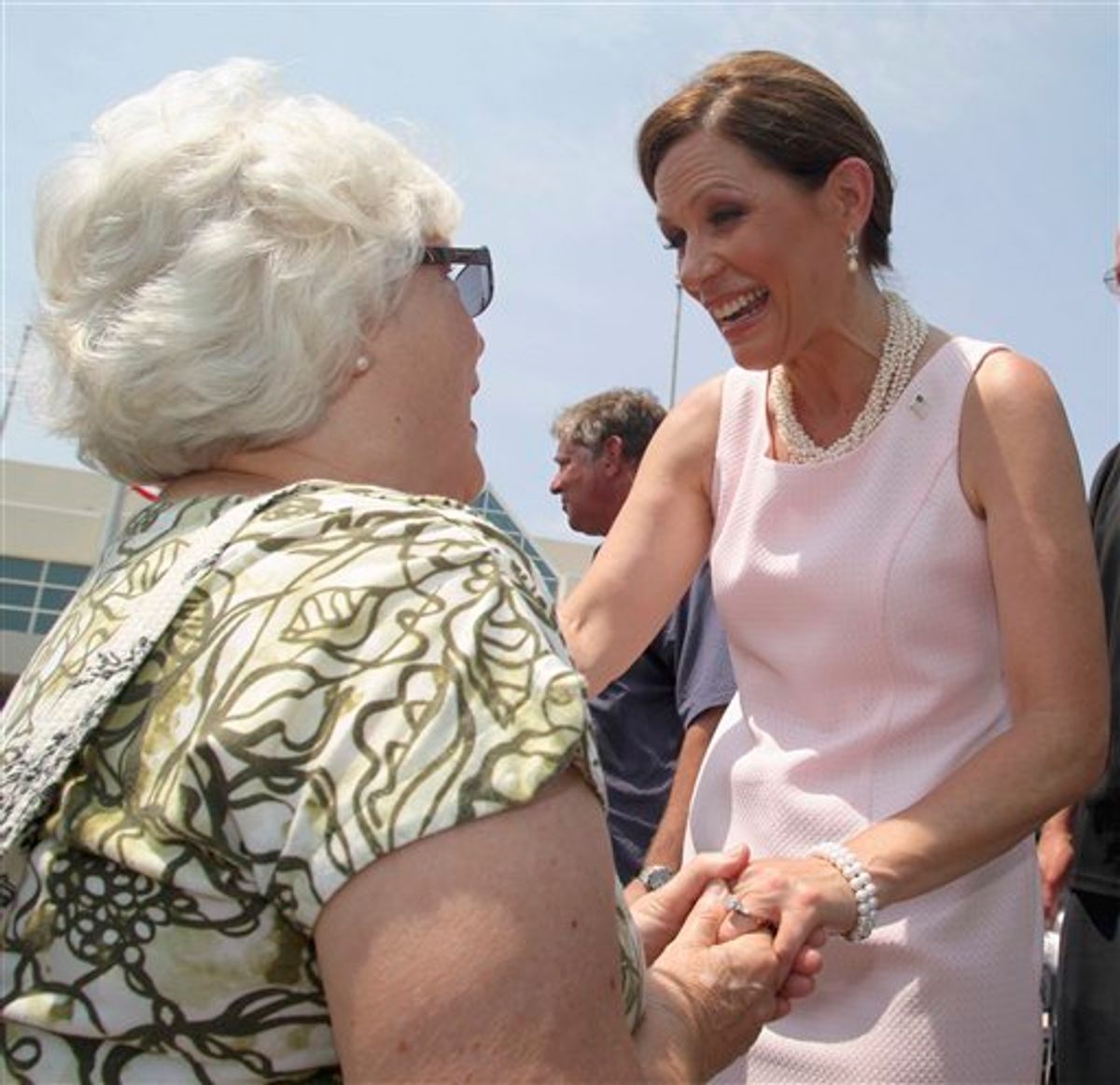 The consensus view of the political media holds that Rick Perry has taken the wind out of Michele Bachmann's sails. And there's definitely something to this.

The Texas governor has stormed into first place in the national GOP horserace, gobbled up media attention, and demonstrated a powerful ability to connect with the party base's emotion-fueled resentments. In other words, he's playing the same basic role Bachmann has been trying to play, except he he a more credible background (three terms leading the country's second-largest state) and is seen by the party establishment as a safer option (even if there are doubts about his electability). Thus, Bachmann's national support has slipped and her media presence has dwindled since Perry became a candidate two weeks ago.

The temptation is to say that Bachmann has been exposed as just another Herman Cain -- a fad candidate who enjoyed 15 minutes of fame before there were any real, non-Mitt Romney options for the GOP base. Cain was the early spring's Republican sensation, but since Bachmann's June debut, his numbers have plummeted and he's all but vanished, and no one expects a second coming.

It's possible that Bachmann is now destined for the same fate, but I wouldn't bet on it yet, and the reason can be spelled with four letters: I-O-W-A.

While Perry has clearly dented Bachmann's support in the first-in-the-nation caucus state, he's hardly wiped her out. A new poll shows Perry leading the Minnesotan by just two points, 24 to 22 percent, while a survey conducted by a pro-Perry PAC puts his advantage at three points. This is consistent with a PPP poll from earlier this week that gave Perry a four-point edge on Bachmann.

And when it comes to her potential impact on the GOP race, Bachmann's Iowa numbers are far more significant right now than her national numbers (which are barely in double-digits), given how crucial the caucus results will be to shaping polls and expectation as the race moves on to other states. If she can beat Perry in Iowa this winter, Bachmann would see her support and visibility explode elsewhere, just as Perry's would ebb.

Here it's probably worth noting that "winning" is a relative term when it comes to Iowa and other early contests. It's impossible to say right now how, exactly, a first-, second-, or third-place showing for any of the candidates would be interpreted by the political world. Where the bar will be set for everyone all depends on how the race develops over the next few months.

(A good example of how this works can be found in Bill Clinton's 1992 campaign. A month before that year's New Hampshire Democratic primary, he was the clear frontrunner. But then he was hit with two scandals -- Gennifer Flowers and the Vietnam draft -- and his numbers melted down. He ended up finishing second in New Hampshire, eight points behind Paul Tsongas, but given how far he'd fallen, he was able to sell this as a triumph and the "comeback kid" narrative was born.)

So it's unclear yet what it will take for Bachmann to "win" Iowa and for Perry to "lose" it. It may end up being a simple, literal question of which one does better than the other (like with Barack Obama and Hillary Clinton in 2008), but we don't know yet. What the latest numbers do suggest is that Bachmann will stand a real chance of clearing the bar, wherever it's set, and dealing a potentially serious blow to Perry.

After all, there's a reason her numbers are so much stronger in Iowa than at the national level. It's partly because she's spent so much time there and because of her next-door neighbor status (and those Waterloo roots she keeps bringing up). But the main factor is demographic: The caucus electorate tends to be made up of highly engaged, deeply religious conservatives. In the same new poll that shows Bachmann within two points of Perry, nearly 40 percent of respondents identified themselves as Tea Party members, and around 60 percent of GOP caucus-goers in 2008 said they were born-again Christians.

This suggests that there's room for both Perry and Bachmann in Iowa. Through the extensive work she's already done in the state, Bachmann has established  some real support. And while its value is limited because Perry and Romney ignored it, her recent victory in the Ames straw poll did show that she has the ability to mobilize those supporters. It's not hard to imagine her hunkering down in Iowa over the next few months and remaining a viable threat to win the caucuses -- or at least to fare well enough to beat whatever the expectations end up being.

This makes her a real threat to Perry. He doesn't need to win Iowa to grab the GOP nomination, but it sure would help. As Nate Silver noted earlier this week, a "convincing" Perry victory in Iowa could make him an unstoppable force. But a loss to Bachmann could severely complicate things for him, lifting her support in subsequent states at his expense and calling his own strength into question.

So even if her national visibility declines, it would be a mistake to write off Bachmann, as long as she has a pulse in Iowa.