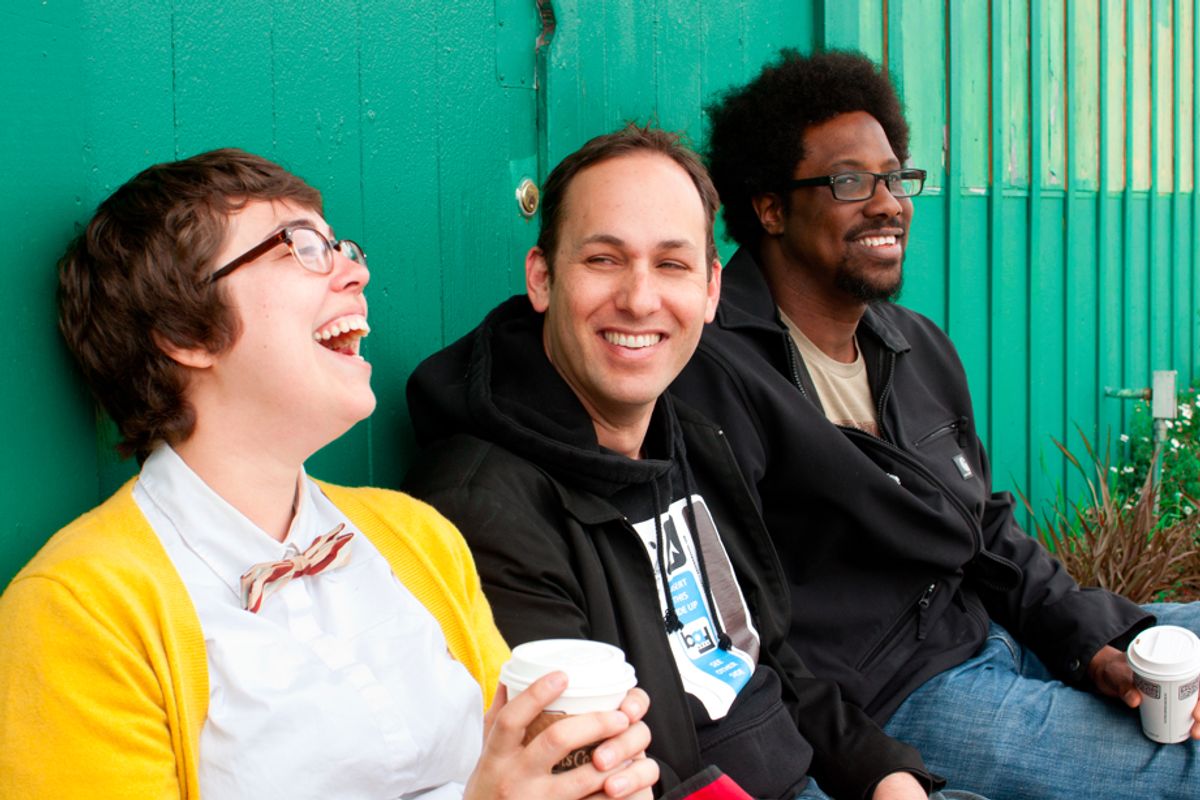 What is it about America that makes us so easy to mock?

I'm going to go out on a limb and say: Because we behave, as a democracy, like a 5-year-old with her ass on fire.

In fact, an entire domestic industry has arisen that specializes in cracking wise about our idiocy. The big names (Stewart, Colbert, Maher) now rank as the most trusted names in journalism.

The catch, of course, is that these folks insist they're merely comedians. They're not interested in curing our political dysfunction; they just mine it for laughs.

Nato Green has a different agenda. The San Francisco-based comedian has teamed up with two of his cohorts, W. Kamau Bell and Janine Brito, to form a collective called Laughter Against the Machine. This fall they're taking their show on the road -- and hardly looking to preach to the converted.

Their destinations are what Green refers to as the "flashpoints of American ignorance and upheaval," locales such as Phoenix, where Sheriff Joe Arpaio delights in humiliating inmates, and Dearborn, Mich., home to our nation's largest Muslim population.

Although the trio often mocks those who live in the reality constructed by Fox News, the tour's purpose is not to bash conservatives. On the contrary, what they hope to do is move Americans past the grievances that divide them, to the problems we face collectively.

A couple of documentary filmmakers will tag along to capture the action, and to provide bail money, should it come to that.

Salon recently sat down with Green to talk about his upcoming adventure.

How was Laughter Against the Machine born?

The idea was hatched in 2008 during a cranky, carne asada-spiked conversation between me and W. Kamau Bell. George W. Bush was a full-employment act for any comedian whose "political comedy" repurposed redneck jokes or blond jokes to be about Bush's stupidity. In those days, liberal audiences wanted comedy to validate a smug worldview -- that even though our side was getting its teeth kicked in, at least we were cleverer than the Red People. I spent 14 years as a union organizer, which convinced me that progressives lose because of us, so I naturally wanted my comedy to hunt a bigger whale than right-wing stupidity.

LATM became a show where we could examine the damage of our society. We wanted to explore Big Ideas beyond the relentless drivel of the news cycle. We only joke about things that we care about personally, rather than things that are merely funny. A good LATM show gets the crowd gasping and shouting, not just laughing.

The most controversial topics at our shows might surprise you. Jokes about vegans, Tyler Perry or the Gipsy Kings end up being way more volatile than jokes about race, slavery or the Holocaust. Whiteness and Palestine are guaranteed to make folks uncomfortable.

In the past, you guys have mostly stayed in the Bay Area, where you're based. You're now taking the show on the road, to venues where you are likely to get stuff thrown at you. Take me through your decision-making process.

If we get stuff thrown at us, it will be a resounding success! Far better than performing for four hippies in Michigan who were dropped off by the Dead in the ‘60s and pitched a tent and never left.

After Gabrielle Giffords was shot, I coped and frightened myself by watching white supremacist videos online. Yet there must be cool people in Arizona, toiling to save their state from the face-shooting, immigrant-reporting crusaders who have it in their glazed clutches. And those people could probably use a laugh. It's like Gil Scott-Heron's song "Johannesburg." They may not get the news, but they need to know we're on their side.

If we can raise the money, we'll put out a tour documentary, because in each place we're going to learn about what's happening while we're there. In Arizona, we're going to go see the border. In New Orleans, we're going to visit public housing. In D.C., we're going to find the housekeepers at the hotels where politicians take their hookers. (Presumably, all of them.) All of that will come spilling out onstage.

Jon Stewart and Stephen Colbert are now our culture's moral backstops. Should I be grateful or terrified?

You wouldn't have asked that question about Mort Sahl, Richard Pryor, Lenny Bruce or George Carlin. Those guys are the Mount Rushmore of comedy. But they didn't create political and cultural currents. They responded to them.

Comedians shouldn't be leading movements. We need people in all walks of life -- including show business -- who want a better world, but someone else should step up and be the moral backstop. Let those dudes just be great comics. By the way, someone should also rebuild the women's movement, because I have daughters and it looks shitty out there.

You have a background in union organizing. By this, I mean that you're a communist. Admit it.

Uhm, duh. Although in this day and age, anyone to the left of Joe Lieberman is labeled a communist, so it's not nearly as sexy as it used to be.

How do you see the right-wing vision of America, if they are able to prevail?

Grinding inequality, nonstop escapist entertainment and a compulsory draft. Plus: binge eating of Jell-O! Before long, the planet becomes uninhabitable, humanity ends and Earth is populated by nitrogen-based life forms.

Fortunately, the right wing doesn't believe in the linear nature of time and rejects the concept of future. After the religious extremists leave on the Rapturemobile, and our corporate overlords wall themselves off in knockoff colonial estates, I'd like to invite the rest of us, the majority of humanity, to join me for an awesome international, women-led, queer-positive, egalitarian potluck barbecue and book club on the beach of the Lake of Fire. We'll say deviant, subversive things like, "What do you think?"