As a Palestinian member of the Knesset, I know American lawmakers aren't being shown the reality of life here 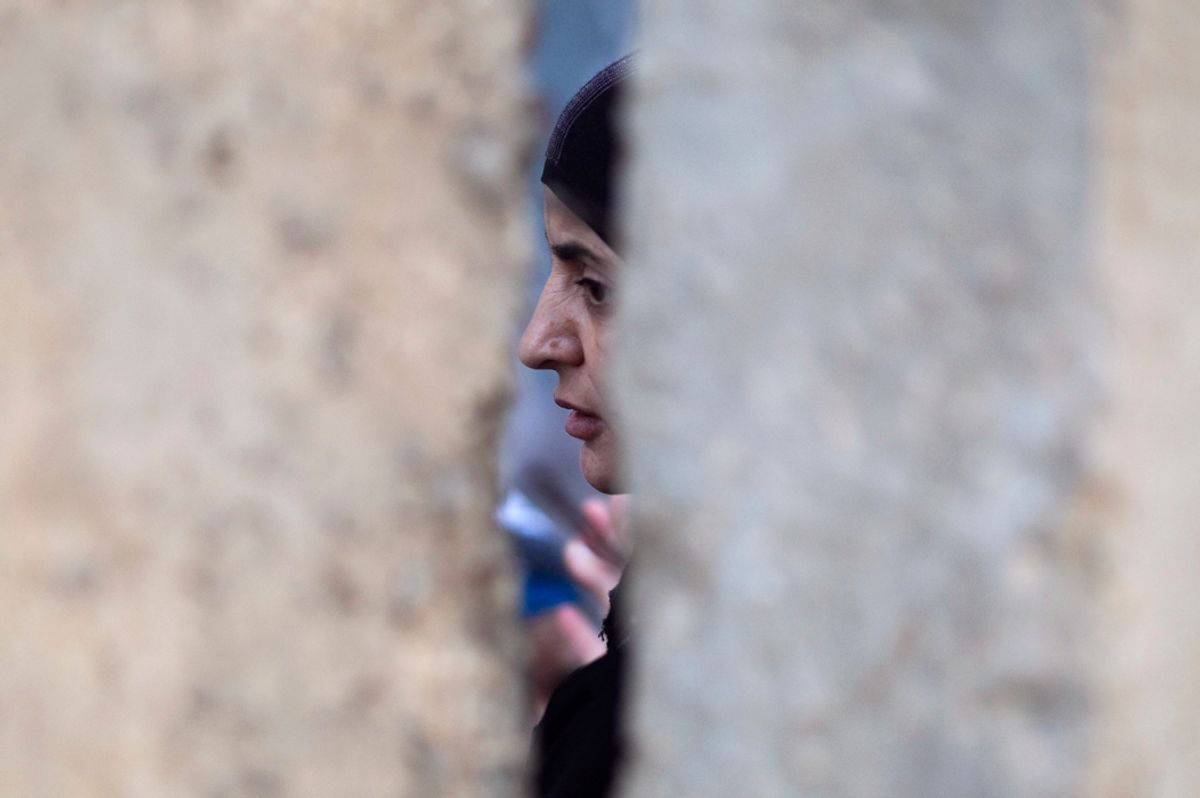 A Palestinian woman waits behind a wall after she was refused entry to cross into Jerusalem from Israel's Qalandiya checkpoint outside the West Bank city of Ramallah, during the third Friday of the holy month of Ramadan August 19, 2011. REUTERS/Darren Whiteside (WEST BANK - Tags: RELIGION POLITICS) (Â© Darren Whiteside / Reuters)
--

Americans, do you know where your member of Congress is?

He or she may well be visiting Israel right now. In fact, 81 members of the House of Representatives -- nearly 20 percent of the whole body -- are expected here this month, according to new reports. If challenged, the representatives (numbering 55 Republicans and 26 Democrats) are likely to say a few words about looking for business opportunities good for their constituents or the need to provide for the security of Israel, which has cost American taxpayers billions of dollars. That's their business and yours.

As a member of the Israeli Knesset, I am concerned that they're on a propaganda tour run by an affiliate arm of AIPAC, the American Israel Public Affairs Committee, which bills itself as "America's leading pro-Israel lobby," yet has helped stymie Palestinian freedom aspirations for decades. Yes, the members will have a token meeting or two with officials of the Palestinian Authority, but they certainly are not going to learn of the discrimination and occupation that the state of Israel imposes on the Palestinian people in its midst.

The real story, tweeted by one wit, is whether any member of Congress would have accepted a trip paid for 20 years ago by an Anglo-Boer lobby-affiliated organization seeking to put a positive shine on apartheid South Africa. The Rev. Jesse Jackson, a leader in the anti-apartheid movement, certainly would not have taken a propaganda junket to legitimize whites-only neighborhoods.

Yet his son, Rep. Jesse Jackson Jr., has visited here, where ethnic-religious discrimination is written into law. I dare say, Jackson heard very little about the more than 35 laws that discriminate against Palestinian citizens of Israel. I doubt Israeli officials volunteered information about the new legislation passed by the Knesset that subjects anyone who calls for a boycott of companies colonizing the West Bank and East Jerusalem to financial damages.

As a member of Israel's large Palestinian national minority, I find Jackson's participation, along with five other members of the Black Caucus especially disappointing. As for delegation leaders Rep. Eric Cantor and Rep. Steny Hoyer, their shilling for Israel is business as usual. They've never expressed any alarm regarding Jewish settlers subjugating Palestinians, and I don't expect them to start now.

But I do expect Jackson and the other members of the caucus (other than Rep. Allen West, advocate of torturing Arabs) to reject colonization and racial discrimination. Their complacency in the face of modern-day colonization and their adoption of hard-line AIPAC positions stand in stark contrast to the beliefs of many Americans I have met who believe wholeheartedly that it is wrong for Israel to discriminate against Palestinians.

The visitors will be meeting with opposition parties in the Jewish state, but none of them -- not a single one -- is scheduled to meet with Palestinian members of the Knesset even though our existence is often highlighted when Israel's defenders seek to refute charges that Israel is an apartheid state. Israel does allow its Palestinian citizens to vote -- bully for them (this is the 21st century) -- but its commitment to discriminate against Palestinians is explicit and growing.

The Knesset recently passed legislation allowing communities in the Galilee and Negev to discriminate against would-be residents on cultural grounds, a euphemism that will permit anti-Palestinian discriminatory housing to proceed. Legislation is currently being considered that would strike Arabic as an official language of the state. Many Knesset members and a disturbing percentage of Israel's Jewish population regard us as little more than a fifth column in their midst.

As for Israel's policies in the occupied Palestinian territories, these are certainly reminiscent of apartheid. There is a segregationist legal system operating there -- one for Jewish settlers and a harsh, discriminatory one for colonized Palestinians. There are roads in the West Bank where local Palestinians are prohibited while Jewish settlers can travel unimpeded. That's apartheid, in my book. But this reality is ignored by the visiting members of Congress who seem incapable of recognizing Israel's discriminatory practices, much less asking hard questions about Israel's actions.

And, at this point, that's all I ask: If congressional representatives are going to visit my country they should strive to get a full view and not simply disregard the rampant discrimination Israel practices against its Palestinian minority and against the Palestinians of the occupied territories. They should visit Jerusalem on those days when Palestinian men under 50 are prohibited from praying at the al-Aqsa mosque. I could take them personally to my hometown and the neighboring Jewish community where they will see the discriminatory infrastructure gap that saddles Palestinian children with disadvantages that nearby Jewish children never face.

What we need from the members of Congress, and especially the members of the Congressional Black Caucus, are public statements from our American visitors expressing grave reservations about Israel's oppressive treatment of Palestinians in the territories and Israel.

I've been advised such words would be political suicide. If true, if speaking for equality and non-discrimination is now political suicide, then America's problems are even bigger than the recent debt debacle fomented by many of the Republican representatives now visiting Israel.

I hope the members of Congress will reconsider and reject the outrageous view that the United States should veto Palestinian statehood and freedom at the United Nations next month. The United States is totally out of sync with the rest of the world on this matter. The U.S. should act as an enlightened leader rather than appearing like a colonizing power in repeatedly backing Israel's determination to postpone Palestinian freedom. That's the message our visitors from Washington need to take home from their summer vacation.

Ahmad Tibi is deputy speaker of the Israeli Parliament.