In front of the White House, genteel protests with real results 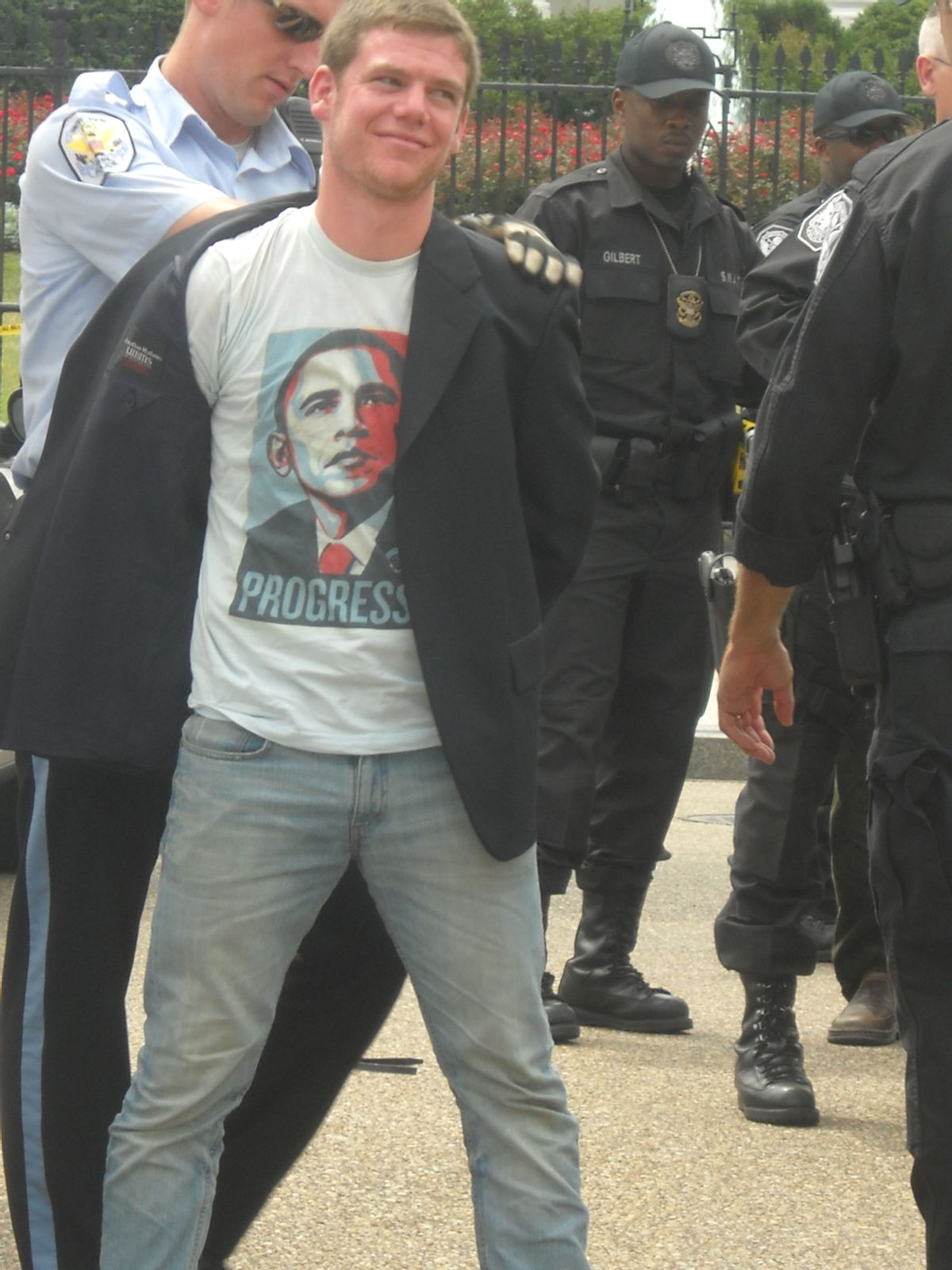 It is less than a mile from the new Martin Luther King memorial on the national mall to the White House. After 54 environmental protesters were arrested Friday morning in front of President Obama's residence the distance felt an inch or two shorter.

Environmental author and activist Bill McKibben rallied his congregation of demonstrators, who dutifully sat their fannies on the sidewalk outside the presidential mansion to protest the construction of the proposed Keystone XL pipeline, which will connect Canadian oil fields with American refineries in the South and Midwest.

"Keystone XL is going to be the defining environmental issue between now and the 2012 election," said McKibben from the sidelines. He was arrested last week and spent two days in jail and did not seem eager to volunteer to return.

Before long, a National Park policewoman with impressive colored tattoos on both forearms, waded through the crowd saying, "This area has to be cleared now." Most of the crowd dutifully retreated to the opposite sidewalk, while the demonstrators, seemingly chosen for their excellent posture, sat in front of Barack and Michelle's windows, looking like they were in church: dutiful, solemn, satisfied.

The impassive uniformed officers pulled on their black gloves and led the demonstrators away one by one in the broiling sun, as the sympathizers chanted encouraging slogans and tourists snapped photos. McKibben's army showed more civility than disobedience, holding out their wrists to be cuffed and climbing silently into the paddy wagon. The perpetrators were taken to the police station in Anacostia and released upon payment of a $100 fine.

"It's not easy for law-abiding people to do something the police don't want you to do," McKibben observed. It wasn't exactly King and Co. fighting fire hoses on Selma Bridge in 1965. Yet thanks to McKibben's marketing skills, the genteel Tar Sands Action sit-in, now in its eighth day, is having a real impact.

The specter of 50-60 people a day volunteering for arrest has brought a new sense of conviction in the Washington discourse on climate change. Mainstream environmental groups, who bet and lost on Obama's abortive cap and trade carbon control proposal in 2009, are now scrambling to join this action. While daintily disavowing civil disobedience, they have endorsed the cause of shutting down the 1,700-mile crude oil pipeline, which they say will only perpetuate the carbon economy and global warming.

"The energy around the Tar Sands protest is not coming from the big green groups headquartered in Washington," said Mike Tidwell, director of the Chesapeake Climate Action Network. "These are people who don't believe the compromise-oriented, insider conversations have been successful. And these are people who vote and get out the vote on Election Day."

Obama seems unlikely to block a jobs-producing construction project going into an election year, but he is going to pay a political price if he does not, Mike Brume of the Sierra Club told Bloomberg Businessweek.

"It will be increasingly difficult to mobilize the environmental base and to mobilize in particular young people to volunteer, to knock on thousands of doors, to put in 16-hour days, to donate money when they don't think the president is showing the courage to stand up to big polluters," Brune said.

The State Department suddenly felt obliged to emit a cloud of particulate verbiage on the once-arcane subject, issuing the final version of an environmental impact statement, which critics say underestimates the risks of the pipeline. Obama's decision is expected by the end of the year.

Against this policy backdrop, the ritual of middle-class martrydom on Pennsylvania Avenue reminded me of the arrests at the South African Embassy on Massachusetts Avenue in the fall of 1984. At the time geniuses like Washington Post columnist Richard Cohen derided the protests as sentimental play-acting. But the embassy sit-in helped forge the boycott and sanctions movement that forced the racist government to capitulate peacefully within a few years. (Cohen later recanted gracefully.)

Mckibben and co. have an even more daunting challenge: an entrenched carbon energy system embedded in the economy of a country led by a novice president worried about the economic future. And we have an old hero, now installed in the capital's iconography, equidistant between Abraham Lincoln and Thomas Jefferson, whose contemporary relevance is evident but not determined.