Pick of the week: A stoner comedy with heart and smarts

A couch-surfing loser spreads gentle chaos in the lightweight, lovable "Our Idiot Brother" 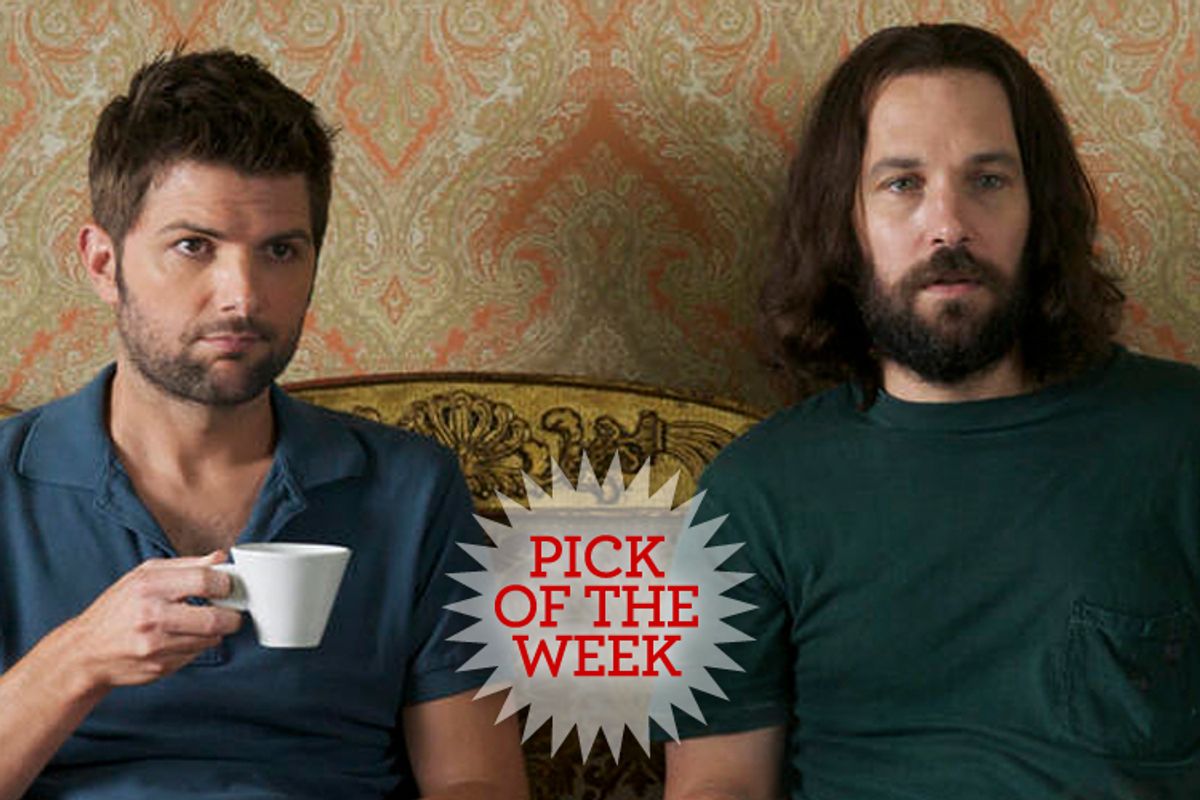 A still from "Our Idiot Brother"
--

I'm not going to make grand claims for the easygoing comedy "Our Idiot Brother," which stars Paul Rudd as the hippie-flavored loser who careens through his three high-achieving sisters' lives, to somewhat predictable effect. It's a familiar variety of upscale Indiewood sitcom, not especially distinguished as cinema, and so on. But at the end of a summer crowded with supremely calculated movies composed of clever spare parts and cynical attitude, "Our Idiot Brother" arrives as a breath of fresh autumnal air, faintly scented with cannabis. This may be a lightweight film, but it's also a distinctive, idiosyncratic and even personal one, directed by Jesse Peretz ("The Ex") and co-written by his sister, Evgenia Peretz, and her husband, David Schisgall. More important still, it's a warm, intelligent and highly contemporary comedy with just the right amount of edge, a terrific ensemble cast and a big, fuzzy golden retriever ready to knock you down and lick you like a giant lollipop.

There's definitely a formula of sorts at work here, but given that the formula is basically "Hannah and Her Sisters" plus a little of Dostoevsky's "The Idiot" (or any other "holy fool" story you care to name), I'm OK with that. If you're keeping score in your Minor Media Celebrities handbook, the Peretz siblings are indeed the children of former New Republic editor Marty Peretz, but there's no borderline-neocon ideology or free-floating anti-Islamic rage on the menu in "Our Idiot Brother." The characters they more or less lovingly satirize are recognizable Northeast Corridor urban-suburban, upper-middle-class types, but not nearly as nosebleed-neurotic or New York-centric as Woody Allen's or Noah Baumbach's. (Oh, all right, I'll say it: This movie's milieu does not seem particularly Jewish.)

I'm a lifelong fan of spiny, challenging comedy but found the somewhat gentler vibe of "Our Idiot Brother" winning, either because the long, hot summer has softened me up or because the Peretzes handle their instruments so nimbly. Rudd's character, the bearded, long-haired, pseudo-angelic Ned, is a wonderful creation, and never a target for easy mockery. He isn't an idiot, either, just a guy who has deliberately chosen a posture of open-hearted naiveté that keeps colliding with the world around him. Ned makes plenty of regrettable choices along his path, from selling pot to a uniformed cop to slamming his nephew's hand in a door, but the gags in "Our Idiot Brother" mostly don't come at his expense. The film's comedy and drama -- both enjoyable but not deeply memorable -- emerge from the contrast between Ned's approach to life and those of his stressed-out sisters.

Ned emerges from prison after the whole selling-pot-to-cop thing only to discover that his girlfriend with the upstate communal farm (the awesome Kathryn Hahn) has shacked up with a new guy and, worse yet, is claiming ownership of Willie Nelson, Ned's beloved retriever. Arguably the whole rest of the movie, with all its couch-surfing and discoveries of infidelity and mid-major life crises, is a shaggy dog story -- arf! -- on the way to Ned's eventual reunion with Willie Nelson.

Ned doesn't last long sleeping in his childhood bedroom, with his mom (Shirley Knight, somehow both gentle and oppressive) urging him to get up early and come with her to the notions store. Still, that might be preferable to his next stop, with his profoundly unhappy sister Liz (Emily Mortimer), a helicopter mom in brownstone Brooklyn who's married to a slimy, skirt-chasing documentary filmmaker (Steve Coogan, whose career in American film seems to be limited to playing unbelievable creeps). Then there's Natalie (Zooey Deschanel), the ditzy free spirit and aspiring stand-up comedian, who's currently in a same-sex relationship with high-powered attorney Cindy (the terrific Rashida Jones) but seems unable to resist tumbling into bed with whoever's nearby and attractive, and Miranda (Elizabeth Banks), a ruthless entertainment journalist who discovers that Ned is a useful tool in extracting grisly details from a celebrity aristocrat with a checkered past.

One can't help wondering about the autobiographical resonance of a family story like this, and there's probably at least a little: Jesse Peretz has said he went through an extended hippie-Deadhead period, not unlike Ned; Evgenia Peretz is a reporter for Vanity Fair, like Natalie; and Evgenia's husband and co-writer, Schisgall, makes documentaries, like Coogan's character (although without the getting-naked-with-Russian-ballerinas part, one hopes). So, whatever -- it doesn't much matter, of course. The details are sharply observed and the female performances around Rudd (especially Banks, Jones and Deschanel, in one of her funniest recent roles) are terrific. Maybe the lessons delivered by "Our Idiot Brother" aren't exactly profound: Ned could benefit from a little of his sisters' superego power, and the chaos he spreads in their lives is ultimately a constructive force. But as life advice from movies goes, you could definitely do worse, and ending the summer with a generous, adult-oriented entertainment that won't insult your intelligence is an unexpected surprise.

Movies Our Idiot Brother Our Picks