Or is it better to play it hour by hour and hope for the best? 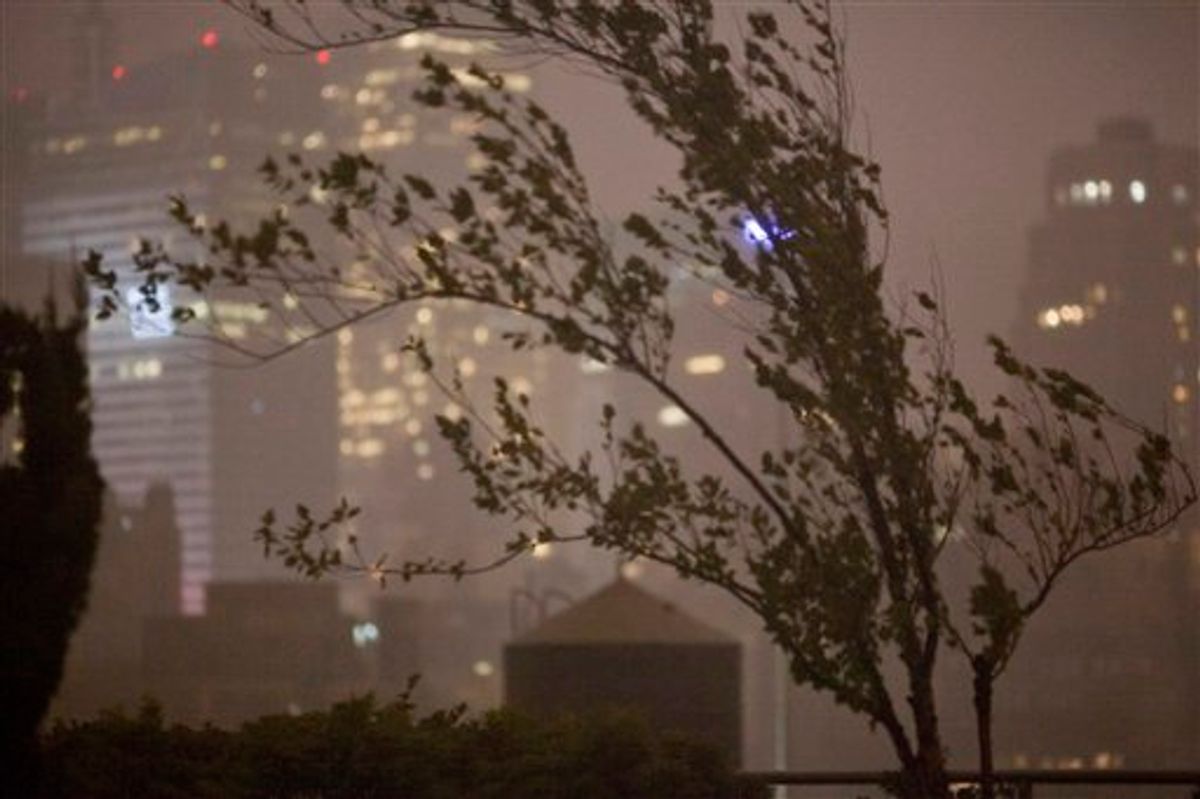 Trees blow in a gust of wind, early Sunday, Aug. 28, 2011, in New York as Hurricane Irene approaches the region. Irene has the potential to cause billions of dollars in damage along a densely populated arc that includes Washington, Baltimore, Philadelphia, New York, Boston and beyond. At least 65 million people could be affected. (AP Photo/Karly Domb Sadof) (AP)
--

From the Carolinas to New England, the remnants of Hurricane Irene brought havoc to East Coast airports over the past three days. Thousands of flights were canceled.

As of noontime on Saturday, all flights in or out of the three major airports serving New York City -- Kennedy, LaGuardia and Newark -- had been suspended. Multiple airport closings for any reason are very rare, and this was the first such closure since the terrorist attacks of 2001.

Entirely shutting down the country's busiest air corridor might have seemed overly cautious, and perhaps the decision came a little sooner than was necessary. But with Irene approaching it was bound to happen at some point.

For pilots, the upper-altitude hazards of a hurricane are bad enough -- embedded thunderstorms and widespread areas of heavy turbulence. But the real menace is down low, where powerful gusts can spawn dangerous windshear, and/or exceed the operational limitations (crosswind limits, tailwind limits and so on) of almost any commercial aircraft.

Another danger is that of windblown debris striking airplanes parked at the terminal or elsewhere on the tarmac, potentially causing millions in damages. As the storm approaches, planes will be repositioned out of those airports that lie in its path. Most are flown out as part of normal revenue operations, with the inbound legs canceled; others might be ferried out empty.

Carriers began postponing flights as early as Friday. This type of proactive cancellation has become common, but it's a relatively new phenomenon. In years past, airlines had a habit of playing it hour by hour and hoping for the best. The result, more often than not, was chaos: tens of thousands of people stranded at airports, planes stuck on taxiways for hours at a time, etc.

Sure, airlines look foolish and people are ticked when a storm fizzles out, but erring on the side of caution has become the accepted practice. It's probably a gamble worth taking.

Nature has been especially unkind to the airlines and their customers over the past 16 months or so. The Iceland volcano; the earthquake and tsunami in Japan; a long, snowy winter; and now this. Trickle-down effects make the cost of storms and disasters difficult to quantify, but surely this spell has bled away billions.

Weather-related crises, from blizzards in the United States to freak windstorms pummeling Western Europe, seem to be increasing. Although volcanoes and earthquakes are one thing, climate change may prove a more formidable foe to commercial aviation than recessions or terrorism; we'll see.

As it happens, the closest I ever came to flying in a hurricane was, ironically enough, at JFK -- in the dead of winter.

It was a February afternoon, and a strange winter windstorm had settled over New York City just as we began our descent.

We knew the weather was going to be tricky. We'd briefed and fueled accordingly several hours earlier. But we weren't sure exactly what to expect.

Our approaches into Kennedy that afternoon rank among the most memorable flying experiences of my life. Approaches, plural, that is -- since in fact we made three of them.

On the first try, just as things had more or less stabilized, the controllers were forced to break us off. With groundspeeds going up and down between 50 and 100 knots, depending on heading, they couldn't keep the spacing straight between aircraft.

They brought us around again.

On the second approach the turbulence and gusts seemed more manageable. Until 500 feet, that is, when we got a windshear warning.

The controllers told us to fly runway heading to 3,000 feet, and asked our intentions.

We began running fuel calculations and pulling up the weather at various nearby airports, expecting to divert.

But moments later, air traffic control called with some bizarre, teasingly fortunate news. The wind at Kennedy was now -- get ready for this -- calm.

Heck if we knew. It was as though the eye of some bizarre February hurricane had settled over the city.

Indeed. The altimeter setting was remarkably low, for one. And 10 minutes later, three-quarters of the way through approach No. 3, it all broke loose again.

Winds had been at three knots at the point when we put the landing gear down. Seconds later the gusts were roaring back, rocking and slamming as we descended down the glide slope.

It was gusty and turbulent, for sure, but this time everything stayed within limits. No shears, no alarms. And luckily the ceiling was high enough to see the runway -- long and mostly dry -- from a mile or two out. Had the visibility been down or the runway slick or short, we'd already have been in Hartford, Conn., or Philadelphia.

More than one passenger would be grabbing for a barf bag. But it was safe.

It was the captain's leg to fly. I wondered if he'd ever made three approaches on a single flight before.

Finessing was out of the question: He wrestled the plane straight, then simply drove it onto the runway with a curse, intentionally flat and firm.

Taxiing in, we watched a half-dozen or so flights come in behind us, each one battling through, just as we'd done.

Through it all, our cockpit had become one extremely busy place. It was maybe the busiest half-hour of my entire career. I did so much talking -- to ATC, to the passengers, to captain and cabin crew -- that by the time we got to the gate my voice was cracking. It was exhausting.

And this is one of those flights that jumps to mind whenever I hear somebody make a crack about how flying is all "automatic," and how pilots "don't really do anything."

As I'm fond of pointing out, the vast majority of landings are the old-fashioned manual kind. But for the record, even if we'd wanted to use it, the winds that day exceeded the limitations of our plane's autoland system. Hands-on was the only choice.

Conventional wisdom often holds that relying on automation is always the safest, most reliable option. Not true at all.