Can the symphony be saved?

Amid bankruptcies and closures, a handful of radical innovators are building a new future for the city orchestra 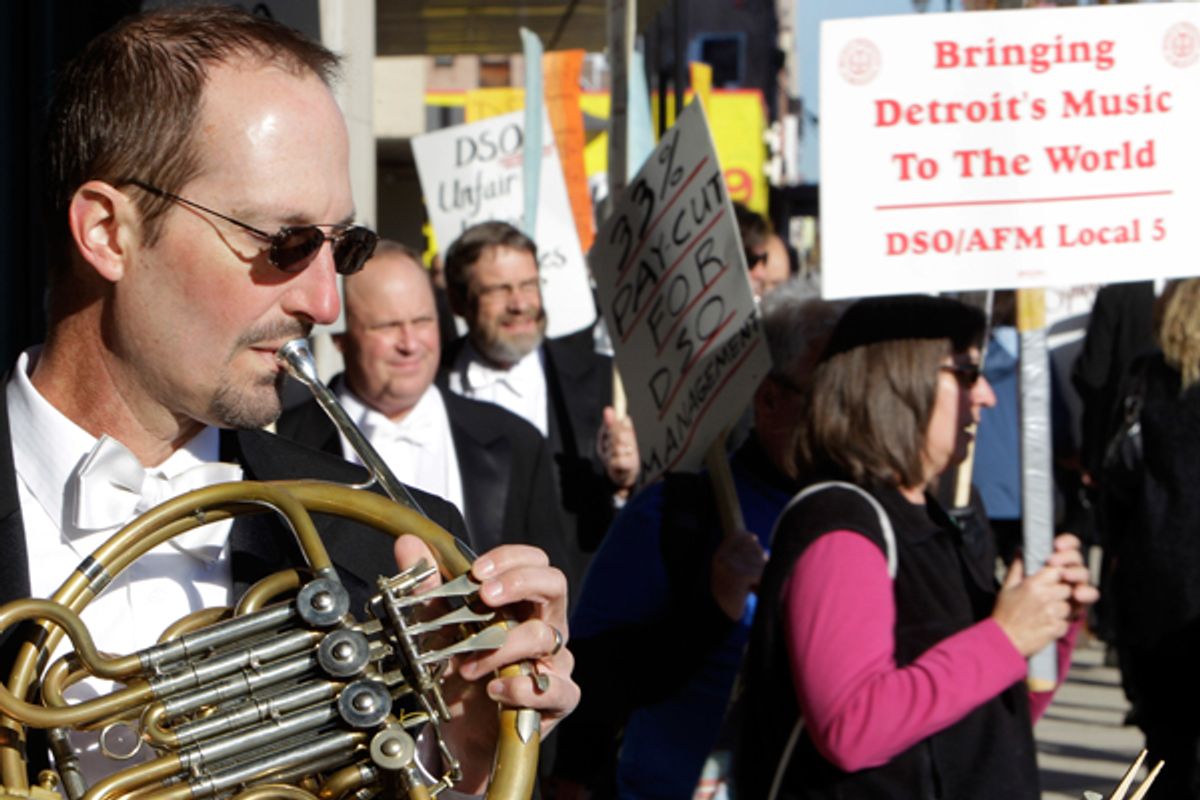 The city symphony is in trouble -- and the size and cultural footprint of the city hardly matter. Musicians have walked picket lines in aging industrial cities like Detroit and Cleveland, but the New York Philharmonic has also reported record deficits. Orchestras in Philadelphia and Louisville, Ky., have filed for Chapter 11 protection, while bankruptcy also silenced -- at least temporarily – the Honolulu Symphony and the Syracuse Symphony Orchestra. (Both hope to return in a new form this fall.)

The problems are easy to identify: The recession has pummeled charitable giving and endowments, while the audience has continued to age. Many large orchestras have been juggling high operating costs and diminishing revenues for years, so they were especially vulnerable to the downturn. Local governments and benefactors, under pressure of their own, are less able to save the day.

So what will? A crisis can sometimes be an incubator for innovation, but some observers worry that there's a lack of bold new ideas -- and that without them, many city and regional orchestras are simply doomed.

"All the data tells us all new audiences are looking for different things," said Jesse Rosen, the president and CEO of the League of American Orchestras, the industry’s leading advocacy group outside of musicians' unions, who hopes orchestras use this period to make sweeping positive changes.

"The appetite for classical music remains as strong as ever," he said. "[But] the desire for it is expressing itself in different ways besides people buying tickets. So how do we adapt to the generations coming up? The problem isn’t in the music, but how to be responsive.

"The audience now is segmented; you still have a large core of subscription seasons of people who are older and like things never to change," said Rosen, while younger audiences are more willing to watch YouTube videos of symphonies.

Other organizations have tried partnerships.

When an emergency fundraising appeal failed, the Syracuse Symphony Orchestra declared bankruptcy in May, with $5.5 million in debts. In the months that followed, musicians, community leaders and Syracuse University came together to establish the Syracuse Philharmonic Orchestra. The plan is to start small and begin performing later this year.

Patrick Jones is head of the music department at Syracuse and also oversees the Center for Live Music in the 21st Century, a think tank trying to blend artistic excellence and business acumen, two things not usually joined in one sentence.

"We don’t just have a five-year plan to have an orchestra, but a plan to have a sustainable orchestra," Jones said. "The university, the county, the symphony foundation, the business community are all involved in creating a new model. This will be a research center and an arts business incubator. We have a flourishing music industry and education program at the school, so there is no reason for the Syracuse Phil to hire funding staff, for instance ... we can come up with different marketing plans, or educational materials."

In Sacramento, Calif., the partnership conversation involves the philharmonic and the opera, which have discussed merging to share certain expenses and audiences.

But perhaps all of these cities should look to smaller orchestras for bolder plans.

John Thomas Dodson, musical director of the Adrian Symphony Orchestra, located in southern Michigan, has fostered artistic development, as well as robust new audiences and solvency. His winning philosophy has acted as the catalyst to making "the orchestra ... a vibrant center of modern life."

Dodson says he tries to devise unique concert concepts with other cultural and community events with audience crossover appeal. This approach is a fast-growing trend with young musical directors.

However, Jeffrey Nytch, the director of the Entrepreneurship Center for Music at the University of Colorado-Boulder, says he sees "precious little" evidence of new ideas and predicts more bankruptcies to come.

He argues that the adversarial relationship between orchestras and their musicians needs to change. Musicians, meanwhile, need to become arts ambassadors in their communities, while orchestras battle a graying audience and perceived elitism with more accessibility and newly designed venues.

"Orchestras fool themselves into thinking they have a market willing to pay for their product because they have folks who are willing to pay high ticket prices," he said. "But that's only a narrow sliver of their market.

"Because these are all big issues with no easy solutions (and solutions will, by definition, vary from community to community), the inertia of large organizations tends to set in: Most orchestras are just trying to hold on, with another spiffy marketing campaign or another plea to their big donors to bail them out."

For rank and file musicians, who dedicate their life to their art and are used to sacrifices, it has already been the toughest of times. Players are used to rolling with the punches, even with strong union muscle behind them. Earlier this month, the musicians at the Wichita Symphony Orchestra agreed to a 20 percent pay cut.

In Philadelphia, the latest tangles involve break-point union negotiations over musician pensions and the threat of a major endowment being pulled. The new conductor is increasing his appearances on the podium this year to help.

"Each orchestra has a different story," said Peter Drobin, music critic for the Philadelphia Inquirer. "For some of the larger orchestras with big endowments, if the markets hadn’t failed the way they did, and contributions from endowments and philanthropists had kept pace, you wouldn’t be seeing a crisis of this size. It's been clear for a while that the equation of what orchestras are spending and what they are taking in wasn't working anymore."