The Pentagon's strengthening grip on Hollywood 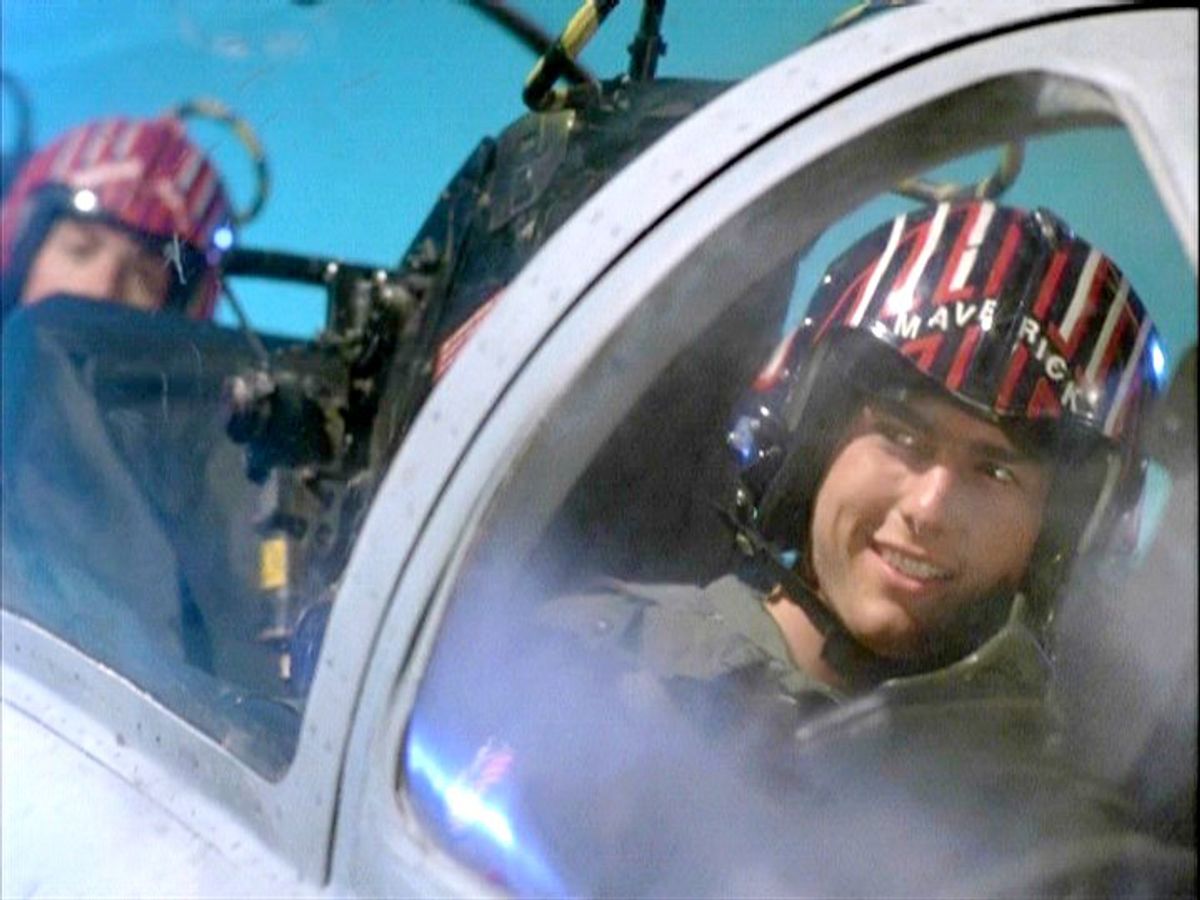 Yesterday, I had a big article in the Sunday Washington Post looking at the long-term legacy of "Top Gun" - a film that turned 25 years old this summer. This is part of my unofficial beat reporting on the Military-Entertainment Complex - reporting I first started a few years back as part of the research for my book "Back to Our Future."

For too long, the media has ignored the relationship between Hollywood and the Pentagon. Knowing this, I figured my Washington Post piece would vanish into the ether. However, to my surprise, it came out in the same week that the Los Angeles Times and Wall Street Journal provided stunning new details about how the shadowy relationship between Hollywood and the Pentagon is setting new standards for government-subsidized propaganda.

Hollywood As Complicit As Ever

First and foremost, both the Times and Journal tells us that collusion between the military and Hollywood - including allowing Pentagon officials to line edit scripts - is once again on the rise, with new television programs and movies slated to celebrate the Navy SEALs. They also give us up-to-date proof that major Hollywood directors remain more than happy to ideologically slant their films in precisely the pro-war, pro-militarist direction that the Pentagon demands in exchange for taxpayer-subsidized access to military hardware.

The Journal, for instance, quotes director Peter Berg saying that his upcoming cinematic tribute to the SEALs was approved by Pentagon-compliant studio execs specifically because the project avoids any nuanced take on the politics of war. "The idea of a good old-fashioned combat yarn, in which the politics are very clear - we support these men - was more appealing to them," he said, noting that his film will be "an unabashed tribute to the courage of (the SEALs)."

Likewise, the Times reports that after facing questions about inappropriate Hollywood-government collusion on a film to glorify the mission to kill Osama bin Laden, director Kathyrn Bigelow issued a defensive statement reiterating that her film will not dare raise any thorny questions the Pentagon doesn’t want raised - questions such as whether the mission was "kill only" and whether bin Laden could have been captured. "(The mission) was an American triumph, both heroic and nonpartisan, and there is no basis to suggest that our film will represent this enormous victory otherwise," she said, no doubt deliberately reassuring the Pentagon officials that she plans to produce exactly what they want.

This, of course, is the Top Gun Effect in action. With taxpayer-subsidized access to Pentagon hardware so crucial for filmmakers, and with the Pentagon so aggressively permitting and denying such access on the basis of a filmmakers’ loyalty to a pro-militarist message, directors like Berg, Bigelow and others know that they still must "get the cooperation of the [military] or forget about making the picture," as one director described it during the "Top Gun" era. "Getting cooperation," means being willing to make seemingly apolitical entertainment products into highly ideological vehicles for pro-war, pro-militarist propaganda.

Pentagon Now Soliciting Movies On Its Own

Of course, this Top Gun Effect has been the norm for a long time, and word that it is stronger than ever is not nearly as big a revelation as the other part of the Journal dispatch - the news that the Pentagon is now reverse engineering the propaganda process. That’s right, instead of simply waiting for Hollywood studios to pitch collaboration projects as they have in the past, military brass are now actively soliciting bids for studios to make recruitment ads camouflaged as apolitical feature films. In order to do this, the Pentagon is now using active-duty taxpayer-funded special forces soldiers as actors. As the Journal reports:

In 2008, Navy Special Warfare invited a handful of production companies to submit proposals for a film project (that) would flesh out the role of the SEALs. The goals: bolster recruiting efforts...The project offered filmmakers access to SEALs as well as military assets...

The Los Angeles-based Bandito Brothers began shuttling back and forth to Coronado, Calif., the SEALs training base near San Diego, to conduct on-camera interviews. They initially planned to work the research into a script, then hire actors to play the lead SEALs...(But) as the SEALs' stories unfolded on camera and over beers, the filmmakers began to question the idea of casting actors to play the sailors.

After they made a group decision to participate, deciding the project served the SEALs' greater good, the Navy made the film a formal task for the sailors...

So not only are compliant filmmakers getting taxpayer-subsidized access to military hardware, they are now getting an additional subsidy in the form of taxpayer-paid real-life soldiers ordered to also be actors. And again, we can infer that Hollywood filmmakers only get this subsidy as long as they are willing to produce films that serve the goal of "bolstering recruiting efforts" - and do not question war or militarism.

Military Calls War a "Product" to Be Sold

The intensifying Military-Entertainment Complex, as described by the Times and Journal, raise again the big question: Why is the Pentagon so focused on using Hollywood as a propaganda machine? The answer is simple: At a time when more and more Americans are questioning the fundamental tenets of militarism (ie. budget-busting defense expenditures, never-ending wars/occupations, etc.), military officials are desperate to turn the public opinion tide back in a pro-militarist direction - and they know pop culture is the most effective tool to achieve that goal. Why pop culture? Because audiences don’t see movies and TV shows as ideological at all. That means movie and TV audience’s psychological filter guarding against propaganda is turned off - making the militarist propaganda in these mediums that much more persuasive.

This is why (as I previously reported) the Pentagon sponsored the new "X-Men" movie and then used it to produce recruitment ads that portray the soldier’s life as just as fun, exciting and safe as being an superhero. As the Journal notes, it is incredibly effective:

The spots played in cinemas, and exit polls of 17- to 24-year-olds leaving the movie theater found that those who saw the ad were 25% more likely to say they would consider joining the Army than those who didn’t, according to U.S. Army Accessions Command Chief Marketing Officer Bruce Jasurda.

"We get asked all the time, ‘Why do you market?’" said Jasurda. "We’re a nation at war going on 11 years, which is … the longest period of consistent conflict that the U.S. Army’s ever been involved in, that the nation’s ever been involved in, longer than any war we’ve been in...That’s why we market. We want to make sure people understand the full nature of this product. The Army is the ultimate considered purchase."

This is exactly how the Pentagon sees militarism - it’s a "product" to be sold via pop culture products that sanitize war and, in the process, boost recruitment numbers.

The Military-Entertainment Complex’s Threat to the First Amendment

No doubt, the Pentagon and its apologists would have us believe that military officials have every right to use publicly owned hardware as a means of suffusing our pop culture with militarist propaganda. As the argument goes, it’s in the Pentagon’s institutional prerogative to defend its image, mission and "product." And this line of logic might work if the Pentagon was a private corporation. But (all jokes about Halliburton and private security contractors aside) the Defense Department is not a private corporation.

Indeed, as taboo as it might be to say it out loud, as much as often as you will get called an unpatriotic traitor for even mentioning it, it remains an indisputable fact that all those military planes and tanks and warships are funded by your and my taxpayer dollars. That makes them not the private assets of some military spinmeister - it makes them all of our property. Thus, when the government decides to grant and deny the public access to that property on the basis of a citizen’s particular political/ideological bent, it is inherently abridging that citizen’s First Amendment rights.

"The First Amendment doesn’t just give people the right to free speech; fundamentally, it prevents the government from favoring one form of speech over another. There’s a great 1995 Supreme Court case called Rosenberger v. University of Virginia that says, "Discrimination against speech because of its message is presumed to be unconstitutional. It is axiomatic that the government may not regulate speech based on the substantive content of the message it conveys. In the realm of private speech or expression, government regulation may not favor one speaker over another." And yet that’s what (The Pentagon) is doing every day."

The way to really understand why this is so unacceptable is to consider comparable examples. Imagine if, say, the Obama administration didn’t let a reporter from Fox News attend a White House press briefing. Or imagine if, say, the Bush administration didn’t let a reporter from MSNBC be part of the press pool on Air Force One. In both cases, the outrage would be obvious, and those being persecuted would rightly insist that the government has no right to grant or deny access to public property on the basis of a citizen’s particular political principles.

This isn’t to say the Pentagon can’t or shouldn’t be involved in filmmaking. But it is to echo what New York University’s J. Hoberman told the Boston Globe in 2004: "If the Pentagon wants to go into business of leasing to the movies it should be open to whomever wants to lease and can afford to. It's our Army. If you can afford the rates you should be able to rent" regardless of your political ideology or partisan affiliation.

Because this isn’t the standard - because the military so aggressively uses our public property to preference saber-rattling propaganda - entertainment industry economics are unduly tilted toward projects that glorify militarism. That, in turn, tilts our entire culture toward war. Only when we fundamentally change this Military-Entertainment Complex and recognize the deep connections between pop culture and militarism can we hope to have a more pragmatic, less bellicose national security politics and posture.