Irene: Wet, deadly and expensive, but no monster 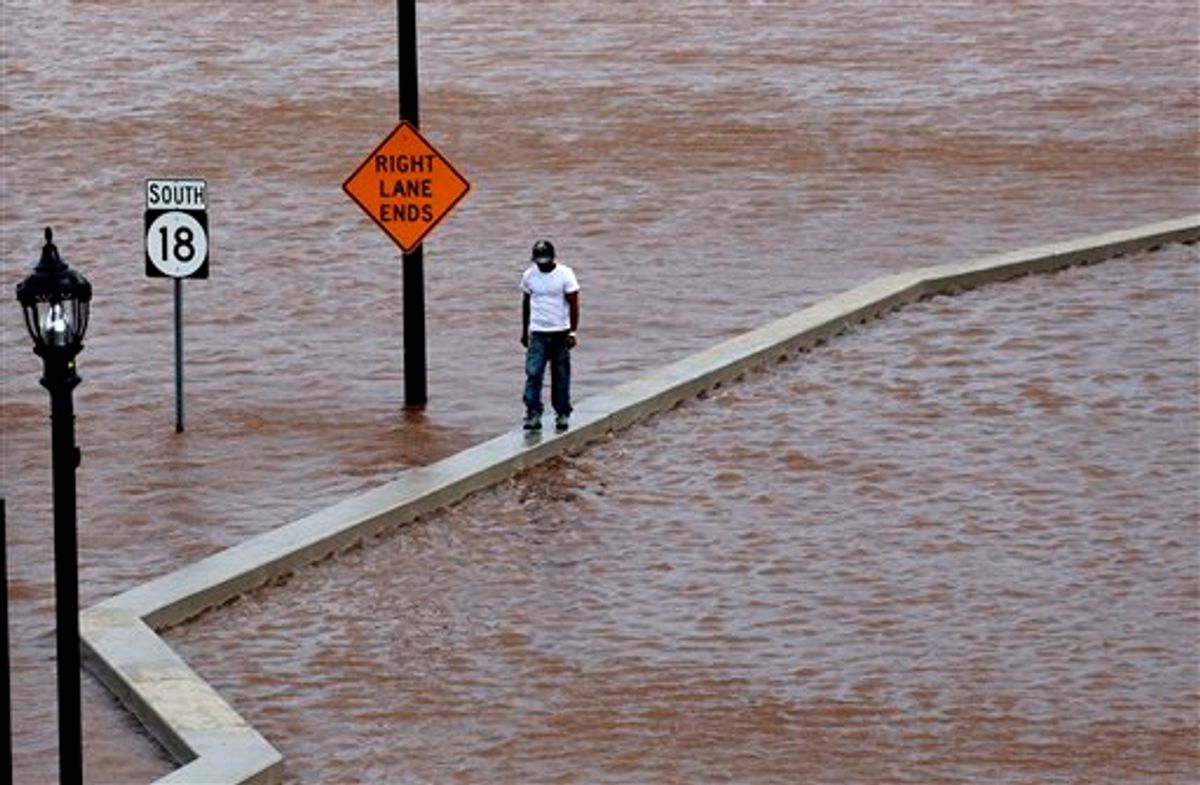 A man walks on top of a wall next to a flooded highway in New Brunswick, N.J., Aug. 28, 2011, as heavy rains left by Hurricane Irene are causing inland flooding of rivers and streams. Flood waters rose all across New Jersey on Sunday, closing roads from side streets to major highways as Hurricane Irene weakened and moved on, leaving 600,000 homes and businesses without power. (AP Photo/Mel Evans) (AP)
--

The storm that had been Hurricane Irene crossed into Canada overnight but wasn't yet through with the U.S., where flood waters threatened Vermont towns and New Yorkers who returned to work had to make do with a slowly reopening transit system.

The storm left millions without power across much of the Eastern Seaboard, left at least two dozen dead and forced airlines to cancel about 9,000 flights. It never became the big-city nightmare forecasters and public officials had warned about, but it still had the ability to surprise.

Many of the worst effects arose from rains that fell inland, not the highly anticipated storm surge along the coasts. Residents of Pennsylvania and New Jersey nervously watched waters rise as hours' worth of rain funneled into rivers and creeks. Normally narrow ribbons of water turned into raging torrents in Vermont and upstate New York late Sunday, tumbling with tree limbs, cars and parts of bridges.

"This is not over," President Barack Obama said from the Rose Garden.

Hundreds of Vermonters were told to leave their homes after Irene dumped several inches of rain on the landlocked state. Video posted on Facebook showed a 141-year-old covered bridge in Rockingham swept away by the roiling, muddy Williams River. In another video, an empty car somersaulted down a river in Bennington.

"It's pretty fierce. I've never seen anything like it," said Michelle Guevin, who spoke from a Brattleboro restaurant after leaving her home in nearby Newfane. She said the fast-moving Rock River was washing out the road to her house.

Green Mountain Power decided against flooding Montpelier, the capital, to save the earthen Marshfield Dam, about 20 miles up the Winooski River to the northeast. Water levels had stabilized Monday morning but engineers were continuing to monitor the situation, said spokeswoman Dorothy Schnure.

Residents of 350 households were asked to leave as a precaution.

Nearly 5 million homes and businesses lost power at some point during the storm. Lights started to come back on for many on Sunday, though it was expected to take days for electricity to be fully restored.

Only about 50,000 power customers in New York City went dark, but people there had something else to worry about: getting to work Monday.

The metropolitan area's transit system, shut down because of weather for the first time in its history, was taking many hours to get back on line. Limited bus service began Sunday and New York subway service was partially restored at 6 a.m. Monday.

Commuter rail service to Long Island and New Jersey was being partially restored, but the Metro-North Railroad to Westchester County and Connecticut was suspended because of flooding and mudslides.

Mentor Vargas, 54, said he made his 40-minute trip on the J train without incident. "It seems people aren't going to work today," he said on his way to work at a repair company in Queens.

Airports in New York and around the Northeast were reopening to a backlog of hundreds of thousands of passengers whose flights were canceled over the weekend.

Some of New York's yellow cabs were up to their wheel wells in water, and water rushed over a marina near the New York Mercantile Exchange, where gold and oil are traded. But the New York flooding was not extensive from Irene, whose eye passed over Coney Island and Central Park.

The New York Stock Exchange said it would be open for business on Monday, and the Sept. 11 memorial at the World Trade Center site didn't lose a single tree.

Mayor Michael Bloomberg defended his decision to order 370,000 residents to evacuate their homes in low-lying areas, saying it was impossible to know just how powerful the storm would be. "We were just unwilling to risk the life of a single New Yorker," he said.

Chris Fogarty, director of the Canadian Hurricane Centre, warned of flooding and wind damage in eastern Canada and said the heaviest rainfall was expected in Quebec, where about 250,000 homes were without power.

At least 24 people died in the U.S., most of them when trees crashed through roofs or onto cars. One Vermont woman was swept away and feared drowned in the Deerfield River.

One private estimate put damage along the coast at $7 billion, far from any record for a natural disaster.

Twenty homes on Long Island Sound in Connecticut were destroyed by churning surf. The torrential rain chased hundreds of people in upstate New York from their homes and closed 137 miles of the state's main highway.

Authorities in and around Easton, Pa., kept a close eye on the rising Delaware River. The National Weather Service forecast the river to crest there at more than 27 feet, about 5 feet above flood stage.

In the South, authorities still were not sure how much damage had been done but expressed relief that it wasn't worse.

In Norfolk, Va., where storm surges got within inches of breaking a record, most of the water had receded by Sunday. There was isolated flooding and downed trees, but nowhere near the damage officials predicted.

In North Carolina, where six people were killed, the infrastructure losses included the only road to the seven villages on Hatteras Island.

"Overall, the destruction is not as severe as I was worried it might be, but there is still lots and lots of destruction and people's lives are turned upside down," Gov. Beverly Perdue said in Kill Devil Hills.

In an early estimate, consulting firm Kinetic Analysis Corp. figured total losses from the storm at $7 billion, with insured losses of $2 billion to $3 billion. The storm will take a bite out of Labor Day tourist business from the Outer Banks to the Jersey Shore to Cape Cod.

Irene was the first hurricane to make landfall in the continental United States since 2008, and came almost six years to the day after Katrina ravaged New Orleans on Aug. 29, 2005.