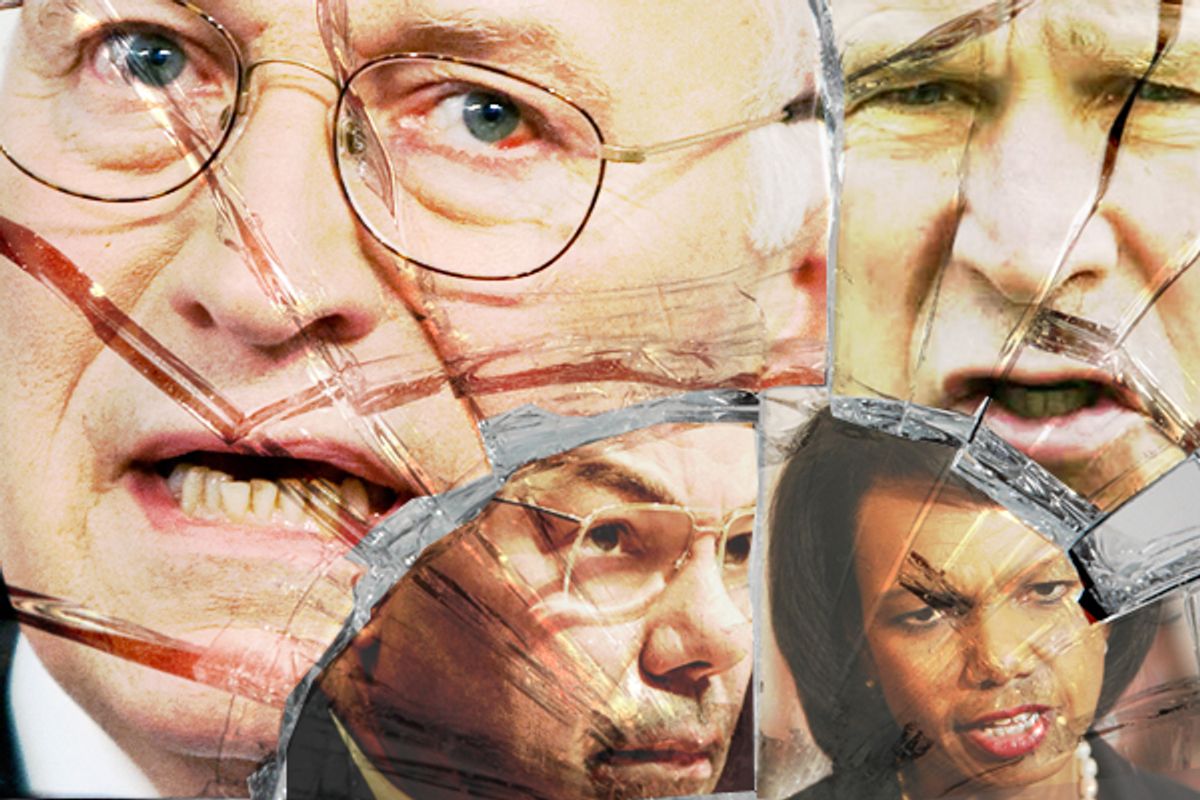 Give the old vizier his due. Richard Cheney is the most influential and radical political leader of his times. The former vice president's new autobiography, assertively titled "In My Time," tells at least part of the story. The fuller telling of his biography will have to come from guilty aides, declassification of key documents, and possibly a future war crimes tribunal. In the meantime, what the man wants to tell us in the here and now is interesting enough.

Cheney's memoir -- by turns implacable, misleading and frank -- presents strong evidence that he served as de facto co-president of the United States from the morning of Sept. 11, 2001, until late 2006. Certainly, the book demonstrates that no vice president in American history has ever wielded such influence -- some would say control -- of the levers of power in Washington.

His radicalism is served proudly. "I wanted to make sure the governor understood my record was not moderate," he writes about an early meeting with Texas Gov. George W. Bush.

The Cheney Regency featured a canny bureaucratic mandarin waging war in tandem with a passive chief executive, who shared his views but his not skills. There is nothing comparable in the history of the American presidency. Some sympathizers have discerned the hand of God in Bush's presidency. Cheney, a less sentimental observer, gives more credit to himself.

Bush, his nominal boss, while occasionally lauded for his "courageous" decisions, cuts an unobtrusive and unimpressive figure in Cheney's life. The first important political decision that Cheney attributes to Bush was selecting him as his vice-presidential running mate. "Dick, you're the solution to my problem," Cheney repeatedly quotes Bush as saying.

About Bush the man, Cheney has nothing to say. Nothing about his struggle with alcoholism, his troubled relationship with his father, his extensive record of two terms as governor of Texas, or his efforts to define a "compassionate conservatism." Such irrelevant details do not interest Cheney who focuses relentlessly on power.

Chronologically, the next important decision that Cheney attributes to Bush came on Sept. ll as the White House confronted reports of hijacked airliners flying into buildings. The president, he writes,

"approved my recommendation that they [Air Force pilots] be authorized to fire on a civilian airliner if it had been contacted and would not divert ... When the president came on the line I told him about the shootdown order."

This is a fib, if not a lie, as a careful reading of the 9/11 Commission report indicates. While the report's language is tactful, senior commission staffers certainly had their doubts that Cheney ever spoke to Bush about the order before it was given. The evidence supports their doubts.

That pattern recurs in Cheney's book: The chain of command appears to function normally while the vice president shapes crucial decisions. As the Bush White House pondered how to respond to the attacks in September 2001, for example, Cheney recalls offering sage advice: "I suggested to the president that it would be useful to make certain that [Secretary of Defense] Rumsfeld had assigned priority to planning for possible military action against Saddam." Rumsfeld's plans would be put into action in Iraq 18 months later.

When British Prime Minister Tony Blair came to Washington in 2002 to ask the White House to support a U.N. resolution against Saddam, Cheney disagreed -- and assumed he had Bush's assent. "I knew the president was no more interested than I was in an endless round of inspections and deception in Iraq," he writes.

As the preparation for war intensified in the early 2003, Prince Bandar, the Saudi potentate, came to Washington skeptical that Washington was really going to invade Iraq. Cheney says he met with Bandar, who was reassured.

"I conveyed the message to the president. He met with Bandar the following Monday." End of story. Bush's conversation with Bandar has no importance in Cheney's account -- and perhaps in reality.

After the destruction of Saddam's regime in March 2003 and Bush's reelection, in 2004, Cheney felt so secure in his power he starts omitting Bush from his ambitions altogether. "I felt strongly that a major change was needed in the national security team," Cheney writes. "Getting a new secretary of state was a top priority."

It is safe to say that no vice president in American history has dared use such presumptuous language about the composition of a presidential cabinet. Cheney's target Colin Powell soon resigned -- though he claims he planned to all along.

About Iraq's descent into violent chaos from 2003 to 2006, Cheney is mostly silent. Not surprisingly, he does not address the human toll: the awful civilian deaths or the massive displacement of Iraqi Christians, and the impoverishment of millions. He shrugs off the worldwide revulsion generated by the revelations of torture at Abu Ghraib. He offers occasional paeans to fallen U.S. soldiers, but more often he calls attention to his own influence in ways that seem condescending to his patron.

As the White House was forced by failure to consider a new policy in 2006, Cheney still tried to impose his will. When Bush's aides prepared a presidential speech about the dismal situation in Iraq that did not include the word "victory," Cheney proudly reveals that he intervened with the speechwriters -- and literally put the talismanic word in the president's mouth. Even Bush's critics have stopped retailing such tart anecdotes about the former president. Cheney has not.

Not coincidentally, Bush broke with Cheney about this time. In November 2006, Bush fired Rumsfeld without asking for the vice president's opinion. For the first time in five years, Bush started making key decisions on his own.

Cheney's account turns petulant at this point. After 2006, no one in the Bush administration (besides Cheney) can do much good. The new Secretary of Defense Robert Gates mistreated two top generals. Secretary of State Condi Rice was so eager to reach an agreement with North Korea she issued a public statement that was "utterly misleading." And President Bush had failed by acting on her recommendations, not his.

"The process and the decision that followed seemed so out of keeping with the clearheaded ways I had seen him make decisions in the past," he writes with surprise.

What had changed was that Cheney no longer dominated the process of presidential decision-making on foreign policy. He was merely the vice president. His reign was over but his pride remained. Like the man or not, the possessiveness of his book's title is deserved. From 2001 to 2006 was Dick Cheney's time.